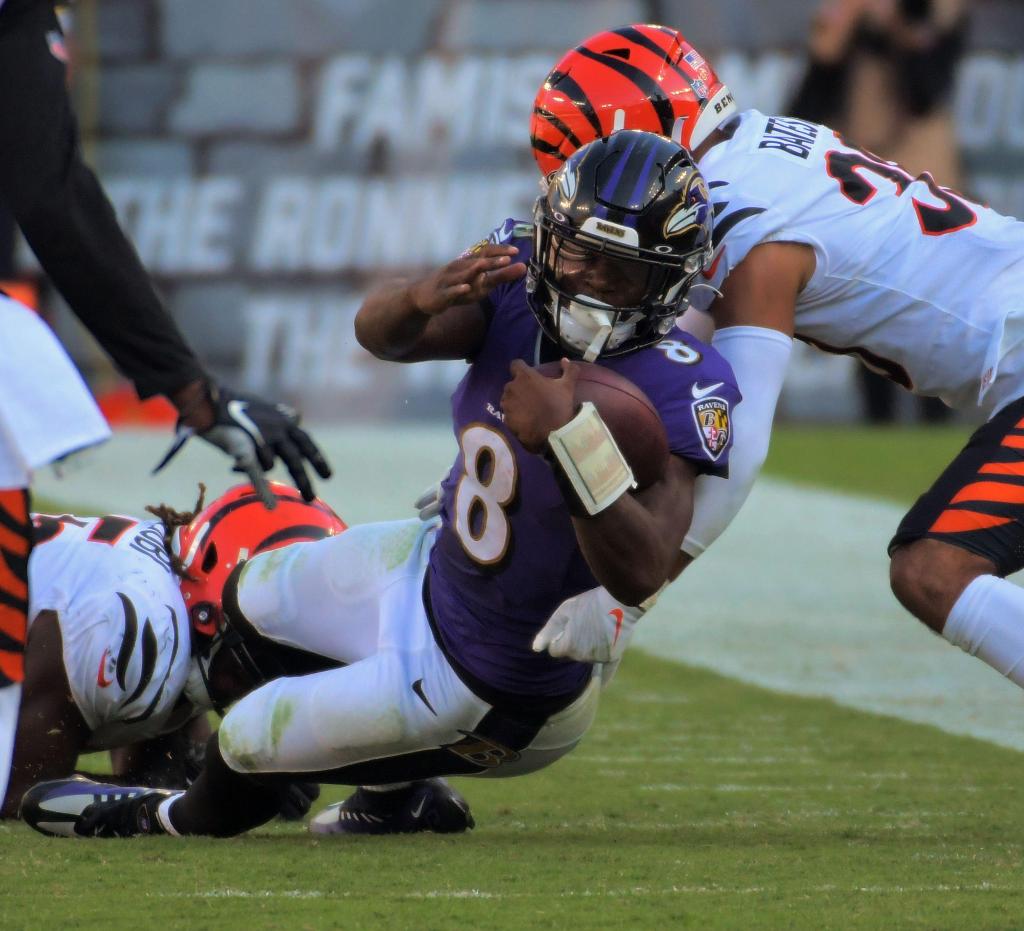 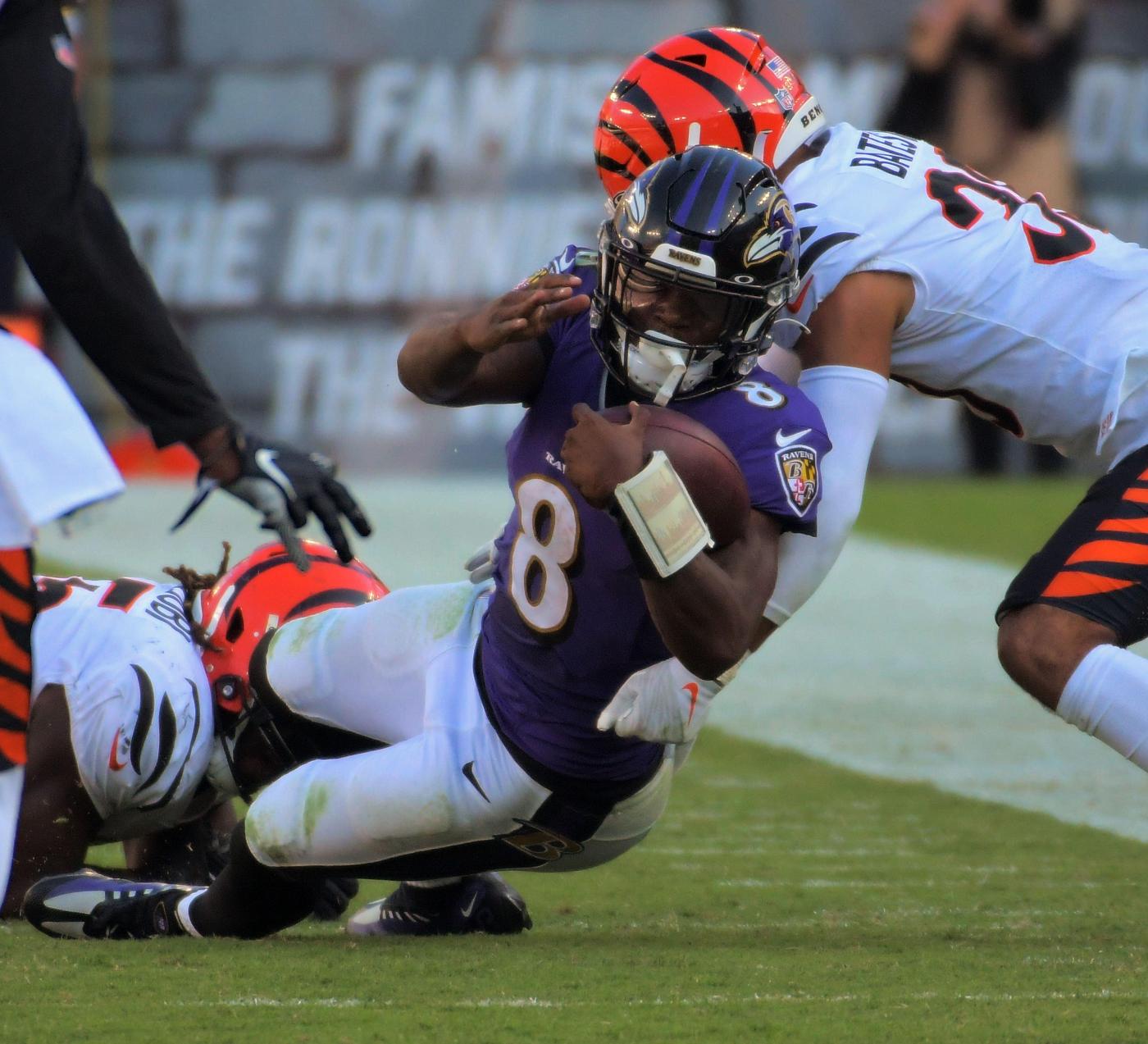 After their first losing season in six years, the Ravens won’t have to wait long to see where they stand among the NFL’s elite.

Early-October home games against the Buffalo Bills and Cincinnati Bengals and a late-October road matchup against the Tampa Bay Buccaneers highlight the Ravens’ 2022 schedule, announced Thursday, which features at least three prime-time games and another intriguing divisional slate.

The Ravens, looking to rebound from an injury-marred 8-9 season and their first playoff absence since 2017, will play five last-place finishers and seven games against five teams coming off postseason appearances. The Ravens’ overall strength of schedule, as determined by their opponents’ combined 2021 records, is 10th easiest in the NFL, helped by their own last-place finish in the AFC North last season.

The team’s toughest stretch will come before its Week 10 bye, but the schedule offers quarterback Lamar Jackson a possible ramp-up window. Sidelined for the team’s final four games last season by an ankle injury, Jackson is set to return to action in the Ravens’ Sept. 11 opener against the lowly New York Jets. The Ravens’ home opener comes a week later, when the Miami Dolphins, bolstered by offseason acquisitions such as wide receiver Tyreek Hill and tackle Terron Armstead, visit M&T Bank Stadium.

After that comes a three-week run of heavy hitters. In Week 3, the Ravens will travel to Gillette Stadium to face quarterback Mac Jones, former Ravens outside linebacker Matthew Judon and the New England Patriots. In Week 4, the Ravens return home to face the team that clobbered New England in the playoffs: the AFC East champion Buffalo Bills, led by quarterback Josh Allen, wide receiver Stefon Diggs and one of the NFL’s best secondaries.

The Ravens’ Week 5 game might be the most anticipated of their season. In a “Sunday Night Football” matchup in Baltimore, the Ravens will open AFC North play against the Cincinnati Bengals, who won the division last season, stunned the Kansas City Chiefs in the AFC championship game and nearly edged the Los Angeles Rams in Super Bowl LVI. Quarterback Joe Burrow, wide receiver Ja’Marr Chase and defensive end Trey Hendrickson headline a team that returns most of its starters and swept the Ravens by a combined 82-38 margin last season.

The Ravens’ two other prime-time games fall in back-to-back weeks but 11 days apart. In Week 8, they’ll face the Tampa Bay Buccaneers, another Super Bowl favorite, on “Thursday Night Football.” The Ravens, who haven’t faced quarterback Tom Brady since he left New England, lost their only Thursday night matchup last year — another middle-of-the-season road trip against another Florida-based team, the Dolphins.

In Week 9, the Ravens and host New Orleans Saints will square off on “Monday Night Football,” which showcased two of the team’s wildest games last year. The Ravens opened the 2021 season with an overtime road loss to the Las Vegas Raiders, who had three game-tying scores in the fourth quarter. Four Mondays later, Jackson led the Ravens back from a 19-point second-half deficit in Baltimore to stun the Indianapolis Colts in overtime.

The Ravens’ postseason hopes could hinge on their AFC North record. Last year, they went 1-5, their first last-place finish under coach John Harbaugh. This year, their schedule is backloaded with divisional tests. They’ll host the Browns in Week 7 and travel to Cleveland in Week 15, a pair of games fraught with uncertainty. Browns quarterback Deshaun Watson still faces 22 active lawsuits that accuse him of sexual assault and sexual harassment during massage therapy sessions; it’s unclear when or whether the NFL might punish the three-time Pro Bowl selection this season.

The Steelers, who swept the Ravens in quarterback Ben Roethlisberger’s final season in Pittsburgh, will host the Ravens in Week 14 and travel to Baltimore in a Week 17 game on New Year’s Day. The Bengals then welcome the Ravens back to Cincinnati a week later for their regular-season finale, the Ravens’ fifth AFC North game in six weeks.

Under the NFL’s scheduling rotation, the Ravens will avoid the Chiefs but face the AFC East, NFC South and the last-place finishers in the AFC West, AFC South and NFC East this season. A Week 13 matchup in Baltimore with the Denver Broncos and new quarterback Russell Wilson should pose another test to a reworked Ravens defense. Home games against the Carolina Panthers (Week 11) and Atlanta Falcons (Week 16) and road games against the New York Giants (Week 6) and Jacksonville Jaguars (Week 12) fill out the remainder of the team’s 17-game schedule.

The dates of the Ravens’ Week 15 and Week 18 games have not been finalized. They will face the Browns on either Dec. 17, a Saturday, or Dec. 18. They’ll take on the Bengals on either Jan. 7, another Saturday, or Jan. 8.

The Ravens will open their preseason schedule against the visiting Tennessee Titans on Aug. 11 and end it with an Aug. 27 game in Baltimore against the Washington Commanders. In between is an Aug. 21 trip to Arizona to face the Cardinals and former Ravens wide receiver Marquise “Hollywood” Brown.