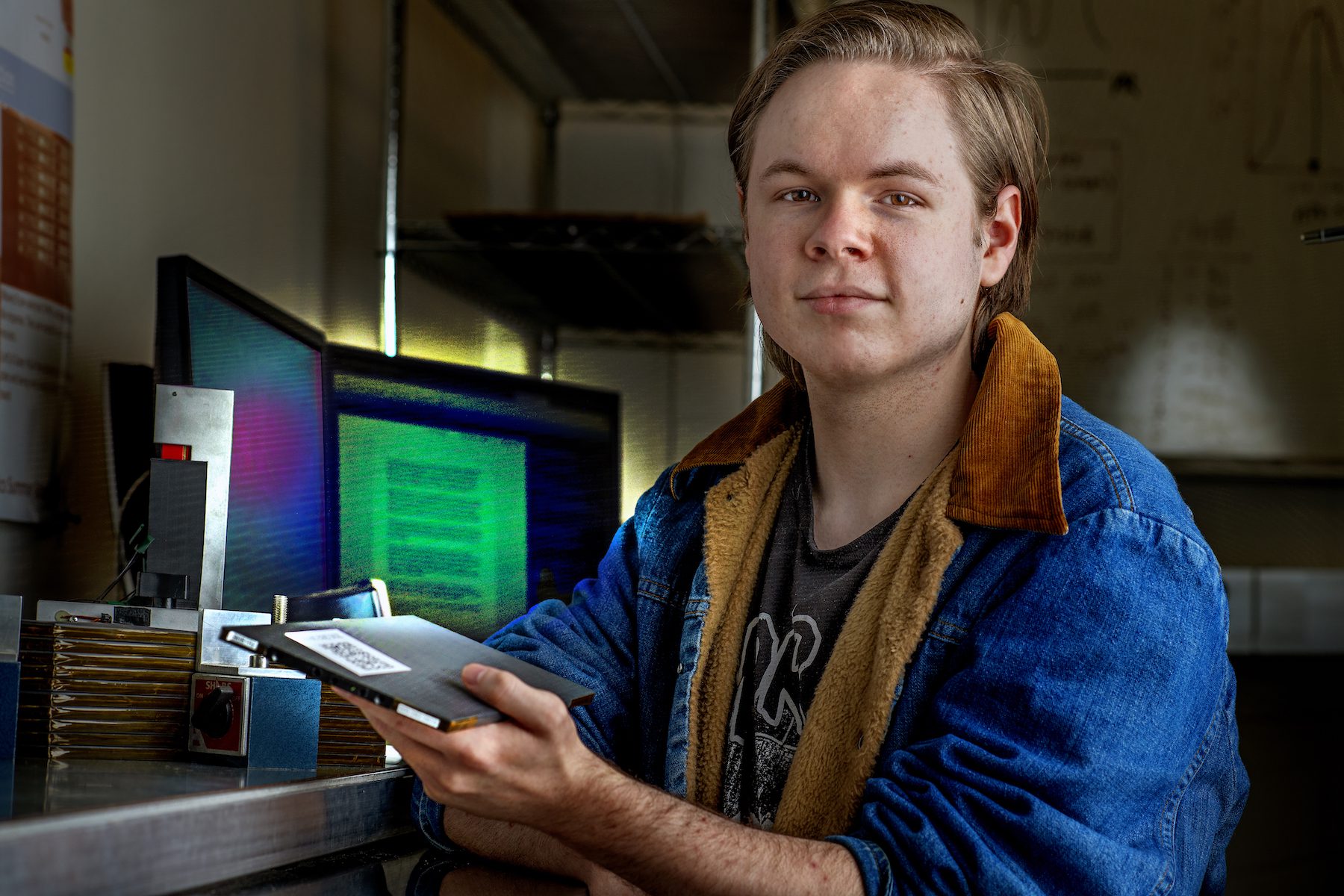 ATLANTA — Jacob Tutterow has been working with scintillating tiles used in detectors for nuclear physics experiments since he came to Georgia State as a first-year student three years ago.

He joined Megan Connors’ lab, where he’s tested thousands of scintillating tiles that will be part of the sPHENIX detector located at the Brookhaven National Laboratory (BNL) in Upton, N.Y. The scientists who are collaborating on the sPHENIX project are studying quark-gluon plasma, a state of nuclear matter that is incredibly hot and dense.

Tutterow’s role in the project is to test the tiles before they are sent to BNL. Each tile, which produces light when a particle interacts with it, is made of extruded plastic and contains a special fiber that guides light to silicon photomultipliers that can be used to read the signal produced. Tutterow tests the functionality of these fibers with cosmic rays, and evaluates the uniformity of the tiles, which come in a range of shapes and sizes, so they can be fitted together to form inner and outer Hadronic Calorimeter (HCal) rings within the sPHENIX.

Both the inner and outer rings have been constructed using the tiles that Tutterow tested in a lab at Georgia State, but he continues to test tiles repeatedly to see if they degrade over time. So far, the results are promising. Tiles that have been tested weekly have not degraded much over the course of two years.

Tutterow has presented his work with this project each year at the Georgia State Undergraduate Research Conference (GSURC).

“It’s nice to have a conference for undergraduates,” he said. “If I gave a talk to nuclear physicists, there might be a lot of things they would ask that I have no idea about because I’m an undergraduate.”

He said the GSURC allows him to gain valuable experience presenting research without needing to be an expert in his field.

“It’s a general conference, so it’s a good opportunity for me to try and communicate all of this stuff to an audience,” he said. “That, in itself, is a different type of challenge.”

During his time in the lab, Tutterow has been gratified to work alongside graduate students, and said he’s become like their little brother. He’s asked them about what they’re working on and gotten valuable advice that’s helping him think about what’s next for him.

“One of the things that you learn in your undergraduate years is what you like and what you don’t like,” he said.

In taking different classes, he discovered that he’s particularly interested in astrophysics saying, “Even the most mundane questions physicists ask about the stars are still pretty cool to me.”

To learn more about his project, you can see his poster presentation at this year’s live, virtual GSURC April 13 and 14.

Review: Atlanta Ballet’s “Fancy” caps season with fresh takes on the past