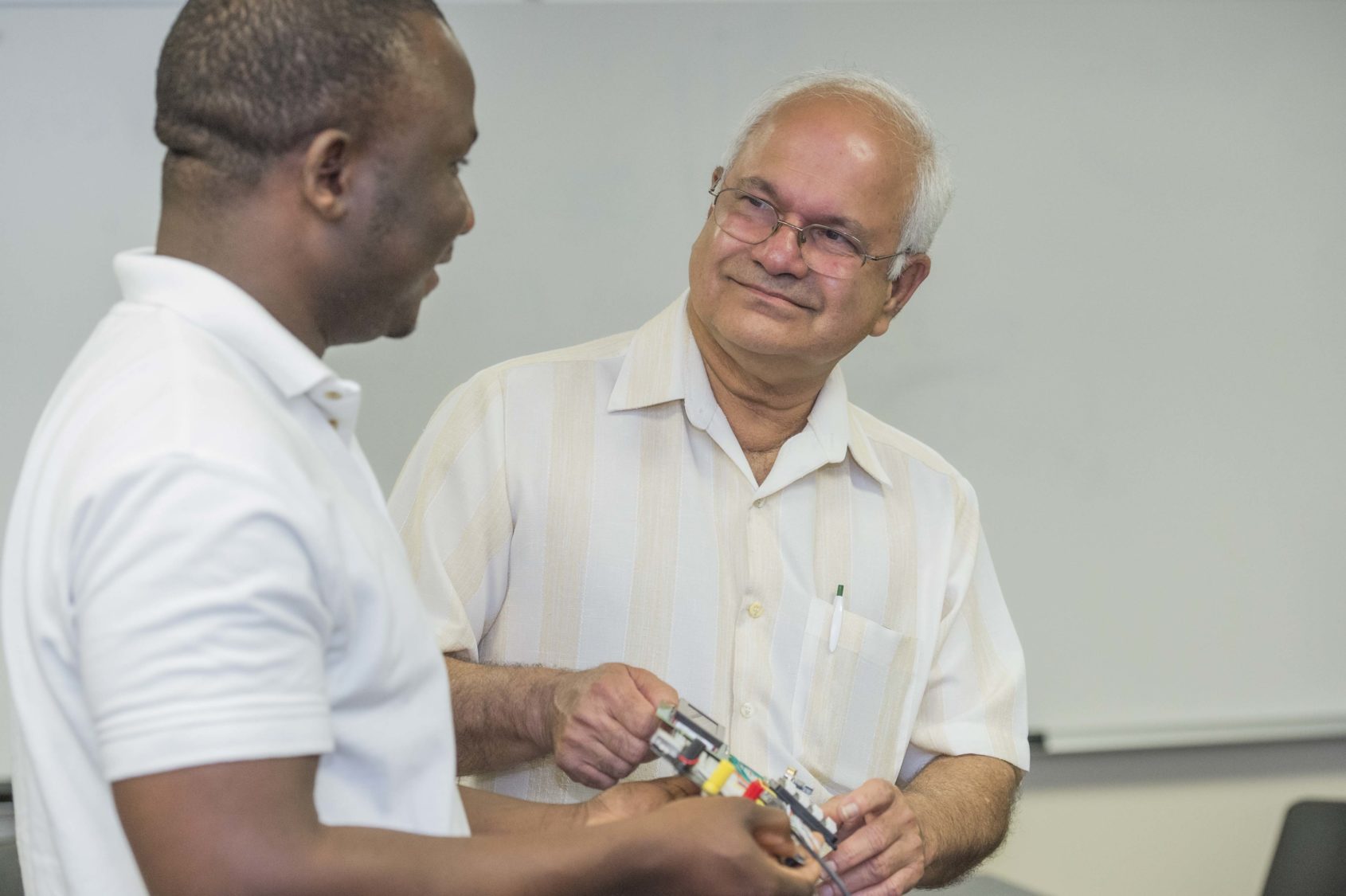 Dr. Anant Honkan didn’t need to think long about giving back to Perimeter College. It’s a place that he says has given him so much, including reasons to establish the college’s largest ever planned gift in addition to a scholarship in his mother’s name.

“My colleagues here were like family to me; they adopted me from the very first day,” Honkan said about when he started teaching at Perimeter and working to build the college’s engineering program.

Today, Honkan is widely regarded as Perimeter’s Father of Engineering.

His passion for science developed in his hometown in southwest India where, as the youngest of five children, he adopted an inquisitive mind early on. For instance, as a young boy, curiosity led him to wrap copper coil around a stick, place it in a bucket of water then dip his finger into it. The jolting and potentially catastrophic experience humors him today.

“As a kid, I was playing with so many things,” he said with a mischievous smile.

After graduating high school in India, Honkan’s mom wanted him to get a job. He wanted to go to college. His mother relented, cutting costs by asking neighbors to lend her son their old class materials.

“I went to college on a prayer and borrowed books,” Honkan said.

Following a few professional stops and advanced degrees, Honkan arrived at then Georgia Perimeter College in 1995. Today, Perimeter College at Georgia State University is recognized for its top-notch engineering program, with Honkan developing and producing engineering courses deemed fundamental to students and their studies beyond the college. He also played the lead role in establishing the school’s Regional Engineering Transfer Program with Georgia Tech.

Katherine Wilson, a Perimeter engineering graduate sent Honkan a note when she was a student studying electrical engineering at the University of Minnesota Twin Cities.

“Thank you for preparing me so well to be an engineering student,” Wilson wrote.

Other alumni stay in touch, too. Kavya Manyapu, for example, is an accomplished NASA engineer and Shantorio Birch was accepted into the coveted doctoral engineering program at the University of Michigan.

“Amongst the student body, if you do not know Dr. Honkan, then you are not considered an engineering student,” Omojaro said.

“As a professor, he is tough, but very fair. He is firm, but nurturing. He takes no excuse for failure and promotes diligence and giving nothing short of your very best.”

Honkan also is a past Perimeter College Cole Fellow, a prestigious recognition given annually to one faculty member who demonstrates extraordinary dedication to undergraduate teaching. Honkan used the award’s $1,000 monetary gift to fund the perpetual book scholarship established to honor his deceased mother, Girija Honkan.

“A dozen of Dr. Honkan’s former students participated and shared for over two hours on Zoom.

“His commitment to students at Perimeter College bears fruit long after they graduate. As a result, over half of the attendees are now donors to the Girija Honkan Scholarship Fund and are becoming volunteers at the college.”

Although he has been at Perimeter College for nearly three decades, calling himself “as old as India’s independence,” Honkan isn’t quite ready to retire.

When asked, he chuckled, and said, “I’m still interested in creating one more new course here.”

To learn how you can support Perimeter College through a scholarship or estate gift, contact Victoria Dorsey at vdorsey@gsu.edu.