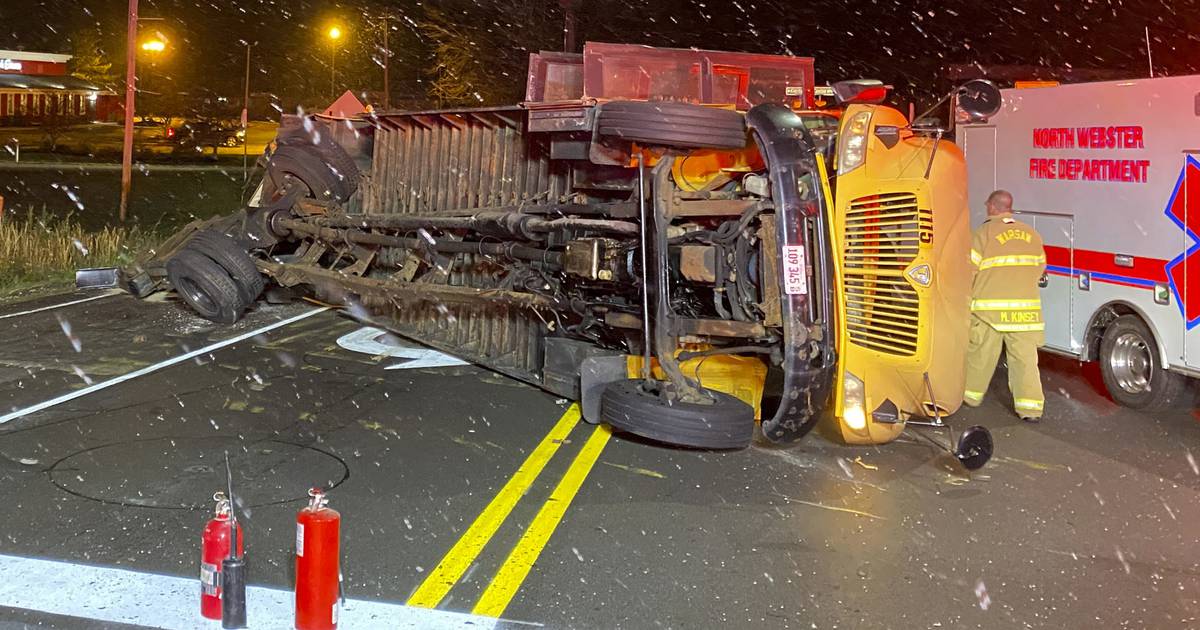 Jeff Rogers and his wife, Lynn, were at home in Chicago the night of Nov. 12 when they got a call from the director of the hockey program at Saint Ignatius College Prep that there had been an accident and they needed to start driving.

Their 14-year-old son, Jack, was on a bus with his junior varsity hockey team returning to the team’s hotel from a tournament in northeast Indiana when the bus was hit by a semitruck.

“We were just hopeful our son was alive and there were no casualties,” Rogers recalled Tuesday. “Obviously, you think of your boy first and then you think, of course, of all the boys. We didn’t know for a while, and then we started getting some information.”

Rogers was one of several parents who spoke at a news conference announcing a lawsuit filed by Cavanagh Law Group on Monday on behalf of the parents and two coaches of 16 Saint Ignatius College Prep students against the driver of the truck that struck their team’s bus in northeast Indiana Nov. 12.

The three-count lawsuit was filed Monday afternoon in Kosciusko County, Indiana, according to a news release. The lawsuit states the driver was drunk with a blood alcohol level of 0.13% — nearly twice the legal limit in Indiana — when he ran a red light and collided with the bus, flipping both vehicles on their sides.

The crash occurred the night of Nov. 12 at U.S. Route 30 and Center Street in Warsaw, Indiana, police said, while the hockey team was returning to its hotel from a hockey tournament in Culver, Indiana.

One student remains hospitalized, but most are back at school. Rogers said his son is home from the hospital and working on getting an abbreviated school schedule for him to return to this week.

Rogers and his wife were about three hours away from the accident, and they didn’t find out until two and a half hours into their drive that their son was alive, he said. They learned Jack’s injuries were more extensive, and he was taken to a different hospital than most of the others. Jack had a broken pelvis, some broken ribs and a concussion, Rogers said.

Karl D’Cunha, the father of Kris D’Cunha, 15, said the hockey team had just finished playing their game and that the boys decided to head back to the hotel and get pizza while some of the parents opted to get dinner at a restaurant next to the arena.

The bus was “on the 29th minute” of a 30-minute drive back to the hotel when the truck ran the red light and hit them, D’Cunha said.

“One little difference, those kids would all be dead,” D’Cunha said. “That’s the truth. Thanksgiving was different this year. I’ve never been more thankful in my life to just hold my boy and for the miracle of God.”

On the bus were 23 kids, the two coaches and the bus driver. The team was supposed to play again on Sunday, Nov. 13.

According to the news release, the truck driver, Victor Santos, has since been charged with 26 felony counts of causing serious bodily injury while operating a vehicle and criminal recklessness while armed with a deadly weapon.

A lawyer for B&W could not immediately be reached for comment Tuesday, and attempts to reach N&V for comment were unsuccessful.

Tim Cavanagh, attorney for the plaintiffs, said the lawsuit may be looking at a “bigger issue in today’s age” where many companies are having a problem with staffing post-pandemic. He questioned the trucking companies’ hiring practices.

“Santos is a convicted felon … He never should have been on the road — much less hired to be behind the wheel of a semitractor-trailer,” Cavanagh said.

He said the defendants of the lawsuit will be formally served in the next couple of days. The hope is for the families to get the answers and justice they want, Cavanagh said, and for Santos and the trucking companies to be held accountable.

The news release noted it is possible more plaintiffs will be added to the lawsuit in the near future.

Wendy Cook, mother of 15-year-old Alex Cook, said her son fractured two bones of his nasal cavity, has a concussion and suffered a seizure while on the bus just after the accident. While he is back in school now, she said he “struggles to get through the days.”

“The school trainer called me yesterday and said he’s nowhere close to getting over the concussion yet,” Cook said. “He also stopped going to driver’s ed since the accident, but he just said last night he wants to start doing it again. It’s very traumatic for them. He’s jumpy in the car.”

Cook said she was surprised by “the speed of social media” that night because her 17-year-old daughter FaceTimed her and “was hysterical asking if Alex was dead.” Cook told her daughter she didn’t know what was going on yet. Her daughter then called back a few minutes before Cook got to the hospital and said she heard from someone else that Alex had been taken on a stretcher and hurt his head.

“So it was from her that I first heard that he was alive, which is not something a 17-year-old girl should be doing,” Cook said.

Cathy Bergmann said she received a call from a bystander at the scene of the accident. Her son, Gus Bergmann, 14, had given her number to him.

“The man said to me, ‘There’s nobody here that has a sheet on them,’ and that was our baseline,” Cathy said.