Overturn of Roe vs. Wade leads to reactions across Mississippi 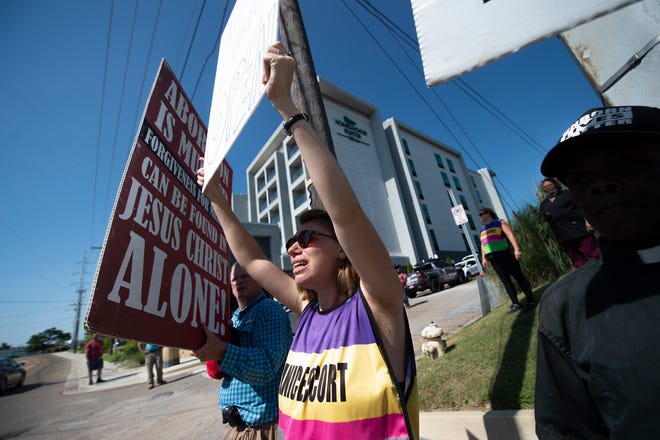 The U.S. Supreme Court decision to overturn Roe v. Wade released Friday has sparked both outrage and celebration in Mississippi, the state where the now-successful challenge to nationwide abortion rights first began.

The case before the court, Dobbs v. Jackson Women’s Health Organization, began as a challenge to Mississippi’s Gestation Age Law which the legislature passed in 2018.

Within 20 minutes of the decision being released, Republican Gov. Tate Reeves released a statement.

“It is a joyous day!” Reeves said in the statement. “Tomorrow, we will wake to a new world, enthusiastically prepared to take on the challenges ahead and to take every step necessary to support mothers and children.”

The state’s junior Sen. Cindy Hyde-Smith also released a statement, within minutes of the decision, thanking God for guiding the justices.

“Roe v. Wade has been a terrible stain on our nation for too long. I am grateful to God for His divine guidance in the Supreme Court’s decision on Dobbs,” Hyde-Smith said in a statement. “I am so very proud that Mississippi has had a leading role in overturning Roe v. Wade.”

However, not everyone in Mississippi is joyous and proud like Reeves, Wicker and Hyde-Smith.

Elizabeth Davidson is a United Methodist minister and executive director of Faith in Women, a group of people of faith in Mississippi who support abortion access.

“I was extremely upset and really heartbroken to see it,” Davidson said. “They’re putting even more barriers on primarily Black women and women of color, and those living in poverty are the ones that are going to suffer the most and are going to be criminalized by this. So it just really breaks my heart that we’re attacking the most vulnerable people among us, and the most vulnerable in our communities are going to suffer the most from this and that’s extremely un-Christlike, even though those that are doing this are purporting to do this because of Christian values.”

“Today’s decision is expected, but no less devastating,” Colón said. “Abortion access is essential to reproductive justice and the human right to bodily autonomy particularly in Mississippi where this case was decided and where anti-abortion laws have already hurt Black folks the most. But even with today’s decision, the courts do not decide our destiny — we do.”

This outcome will be felt far beyond Mississippi as striking down a nationwide right to abortion will lead to the procedure becoming illegal in many states.

Mississippi is just one of 13 states to have a “trigger law” on the books. Each of these laws would restrict abortion beyond the standards previously allowed under Roe v. Wade, on the condition that the 1973 case was overturned. Many, if not all, of these laws are now set to take effect. Mississippi’s trigger law was passed in 2007 and would ban all abortions with exceptions for rape and protecting the life of the mother. The rape exception would require criminal charges to be filed.

The trigger law’s author was Sen. Joey Fillingane, R-Sumrall. Fillingane said in an interview with WLBT that someone with an exception for rape will not merely be able to walk up to a clinic and receive an abortion.

“The clinic is not going to be there,” Fillingane said.

The ban will not take effect immediately. Attorney General Lynn Fitch has 10 days from the court’s decision to certify a ban.

Fitch has yet to announce what she will do, but she did send out a tweet celebrating the decision along with a statement that did not mention the trigger law.

“We intend to give the opinion and the analysis contemplated by the law the thoughtful attention they deserve,” Fitch’s Chief of Staff Michelle Williams said in an email.

The 12 other states with some form of trigger law are Arkansas, Idaho, Kentucky, Louisiana, Missouri, North Dakota, Oklahoma, South Dakota, Tennessee, Texas, Utah and Wyoming. Five other states have abortion bans which remain on the books from before the Roe v. Wade decision. Even more states, like Florida, have passed restrictive abortion laws since Dobbs v. Jackson Women’s Health which will now likely be able to take effect.

An analysis from the Guttmacher Institute, a reproductive rights research organization, found that in total 26 states have these types of laws in place and are likely or certain to ban abortion. Abortion rights advocates have feared that if Roe was ever to be overturned most of the South would in essence become a medical desert for abortion services.

For most Mississippians seeking an abortion, the nearest clinics in a state without either a trigger law or some form of abortion ban will be in southwestern Illinois, near St. Louis, according to the Guttmacher Institute. Illinois would be the closest state with abortion access for 71% of Mississippians, while 29% would be closer to North Carolina.

‘Our next steps’:How abortion rights advocates in the South are prepping for Roe’s possible fall

More news on Roe v. Wade:If Roe v. Wade is overturned, how soon could abortion become illegal across the South?

The court overturning Roe v. Wade had been expected by many, after a draft version of Justice Samuel Alito’s decision was leaked to Politico last month in an unprecedented move.

For many anti-abortion groups in the South, the decision is the culmination of decades of effort to minimize abortion access through a web of restrictions that states have passed over the last four decades. The ability to appoint Supreme Court justices who would overturn abortion rights has often been a talking point in Republican presidential campaigns.

Reeves acknowledged the decades-long concerted effort by anti-abortion politicians and activists in his statement.

“We stand on the shoulders of giants. This win has been achieved thanks to the tireless efforts of so many over decades,” Reeves said.

A Capitol Police officer was involved in a shooting on Sunday, Aug. 14

Unique restaurant announced for Magnolia District in Madison. Find out the details