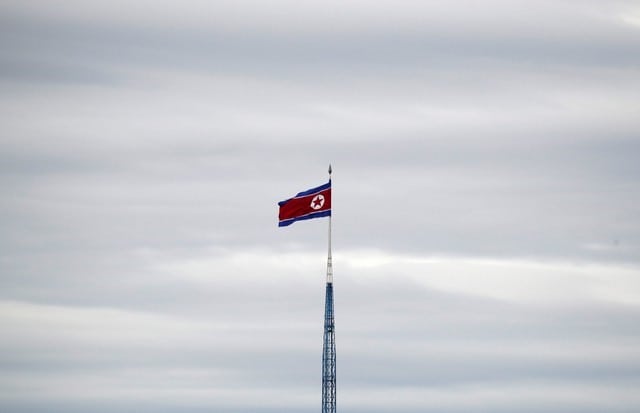 According to the AP, North Korea has made significant development in a tactically guided weapon that they demonstrated a day ahead of U.S. South Korea joint exercises.

Despite all the “love” and visits between Trump and North Korea’s Kim Jong-un, Trump failed to remember something critical. He never got a single concession from North Korea, not a single “deal,” as the infamous dealmaker would call it.  Trump never offered some aid in order to halt North Korea’s nuclear weapons program and never invited Kim to join the rest of the Pacific rim by giving up all missile testing. Nothing. Trump stepped over the line into North Korea, the American president went into North Korea, saluted a North Korean general, and here we are today, as we were before, with North Korea advancing.

KCNA said the weapon tested has “great significance in drastically improving the firepower of the front-line long-range artillery units, enhancing the efficiency in the operation of (North Korea’s) tactical nukes and diversification of their firepower missions.”

KCNA didn’t elaborate, but its use of the words “tactical nukes” suggested the weapon is likely capable of carrying a nuclear warhead that could hit strategic targets in South Korea, including U.S. military installations. The KCNA dispatch didn’t say when and where the launch occurred.

The United States gave the brutal North Korean regime something more valuable than tens of billions in aid. Trump gave it legitimacy. They continue to use that legitimacy without fear of “losing” anything from the United States. To Trump, international diplomacy consisted of nothing more than how he got along with other leaders.

North Korea is one of, if not the, most closed-off country on earth. The official state media tells Korean citizens that North Korea is one of the world’s two great powers and the United States fears North Korea. Whether the average citizen believes this reporting or not is almost impossible to say. But due to North Korea’s propaganda program, it has been American doctrine for decades to never give the North Korean government anything to further that legitimacy. There is a reason the United States always sent “special envoys.” The U.S. didn’t want to send a single person the average North Korean would recognize.

And then Trump came along. Trump didn’t just talk glowingly of Kim, he went and visited Kim one on one, twice, giving North Korea the most valuable asset it could get, video seeming to affirm the propaganda. Trump even lowered the United States to step across South Korea. We went to them. The video will live forever.

And we got nothing for it. The nuclear program remains ever-evolving, and the government remains as aggressive as ever. Citizens that might have had real doubts about the reporting and may not have fought or supported their regime may now consider it legitimate and believe much more of what they’re told. Trump’s actions and the video thereof makes North Korea a much more dangerous nation in the future.