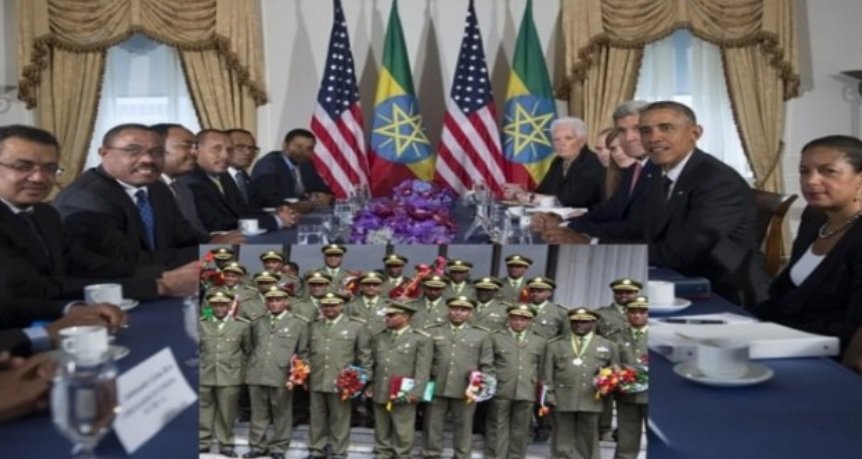 A document that has now been deleted from the Internet shows Barack Obama meeting with Dr. Tedros of Ethiopia and terrorist leaders of that country.  A few years later Dr.  Tedros was elected to lead the World Health Organization (WHO).

In March 2020 the China coronavirus was attacking and terrorizing the world.  It was at this time that we learned about the WHO Director General’s past.

TGP reported that Dr. Tedros was fourth in line of leadership in Ethiopia.  We also learned that the leadership of Ethiopia was a terrorist regime.  This regime and China were closely connected as well.  China was happy to deal with the regime and in turn take advantage of the country’s resources and people. Tedros and his Ethiopian leadership colleagues were connected to the worst kind of abuse.

We have identified a document that is no longer available on the Internet but is available on the Wayback Machine.  This document shows Obama in a meeting with Ethiopian leaders in 2014.  The article is titled “The US Cannot save Ethiopia from Tigray-Peoples-Liberation-Front”.  The cover of the article shows Barack Obama, Susan Rice, John Kerry, and others meeting with Dr. Tedros and other leaders of the Ethiopian terrorist regime.  For some reason, this article has been deleted from the Internet. A recent website article was written to highlight the treaty that will give the WHO (and therefore China) authority ro run world pandemics in the future.   This treaty amendment will take away from independent countries their rights during declared pandemics.  The treaty will empower the WHO and Dr. Tedros (and China) instead.

This article linked to above and in the TGP’s original article from March 2020 now shows this.  The site deleted the article and now has a logo related to the UN at the top.

Why was this article taken down?  Is it because it reveals an Obama with Tedros meeting?  The original title of the article indicates that talks with Ethiopia were not productive, but is this the case?  Did Obama have anything to do with the regime in Ethiopia?  If so, what?

The answers to these questions will likely lead to more questions.