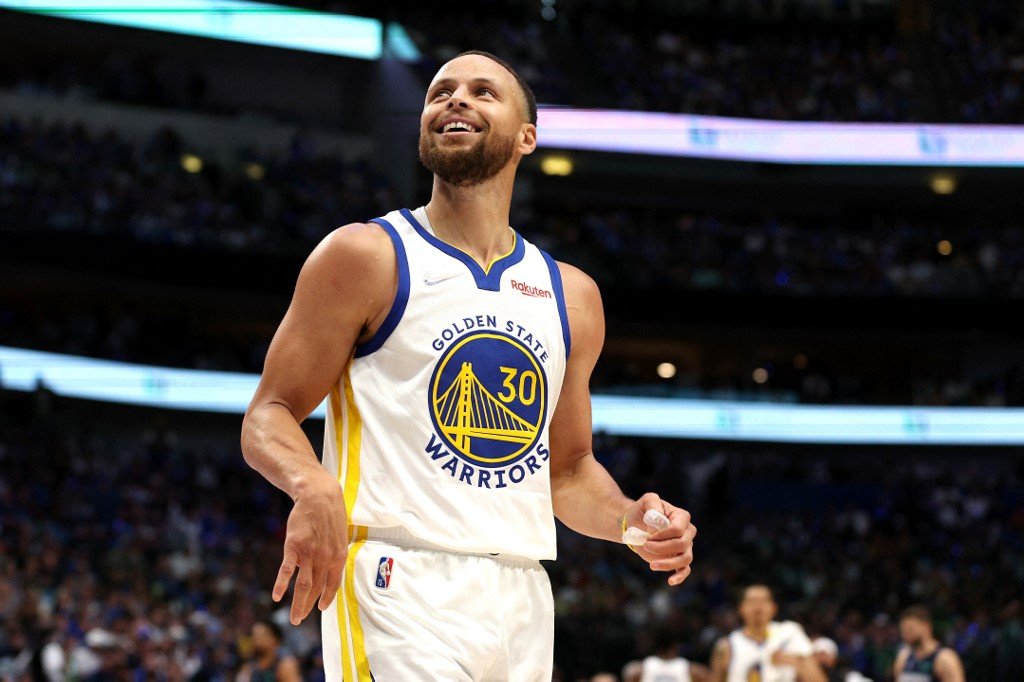 Stephen Curry #30 of the Golden State Warriors reacts to a play during the second quarter against the Dallas Mavericks in Game Three of the 2022 NBA Playoffs Western Conference Finals at American Airlines Center on May 22, 2022 in Dallas, Texas. Tom Pennington/Getty Images/AFP

The Golden State Warriors look to become the first team since Michael Jordan’s Chicago Bulls to make six trips to the NBA Finals over an eight-year stretch by closing out the host Dallas Mavericks in Game 4 of the Western Conference finals Tuesday night.

The Warriors rode a familiar script — a greater depth of scoring and a dominant third quarter — to a third straight win in the best-of-seven set Sunday night, winning 109-100 at Dallas to take a commanding 3-0 lead in the series.

No team has ever overcome a 3-0 deficit to win in the NBA playoffs.

Rising to dominance with the hiring of Steve Kerr as coach prior to the 2014-15 season, the Warriors made five straight trips to the NBA Finals, winning three times, before missing the playoffs entirely in each of the last two years.

A win Tuesday would lock in a sixth appearance in Kerr’s eight seasons, a series in which the Warriors would have the home-court advantage over either of the Eastern Conference finalists — the Miami Heat and Boston Celtics.

While the Warriors have been great at winning series in the Kerr era — they’ve captured 20 of 22, losing only to the Cleveland Cavaliers in the 2016 Finals and to the Toronto Raptors in the 2019 Finals — they haven’t necessarily been great at sweeping series when they’ve put themselves in a position to do so.

Golden State has gone 6-4 in Game 4 when up 3-0, with one of the losses coming against the Denver Nuggets earlier this season.

Kerr thought the Warriors played a sloppy Game 4 at Denver with a chance to sweep in the first round, then watched as the Memphis Grizzlies crushed his club in a potential close-out game in Game 5 in the Western semifinals. He’s hoping the third time’s the charm.

“It’s always the toughest game, the close-out game, so we know it will be difficult,” he insisted Monday. “I would expect that we’ve learned from those two games that we lost and we’ll have a focused effort (Tuesday).”

The Warriors used a 30-21 run in the third quarter in Game 3 to overtake the Mavericks for good. Golden State has outscored Dallas 89-58 in the third period in the series, shooting 53.0 percent in those 36 minutes while limiting the Mavericks to 36.8 percent.

While no team has ever rallied from 3-0 down in the NBA, three have made it to a Game 7, most recently the Portland Trail Blazers in the 2003 first round against the Mavericks.

Win or lose in Game 4, Dallas coach Jason Kidd insists this is a start, not a finish, for his young team led by 23-year-old Luka Doncic.

Doncic has scored 42 and 40 points in the last two games. Only two players have ever put up 40 or more three times in a conference finals: Hakeem Olajuwon in 1995 and LeBron James in both 2009 and 2018.