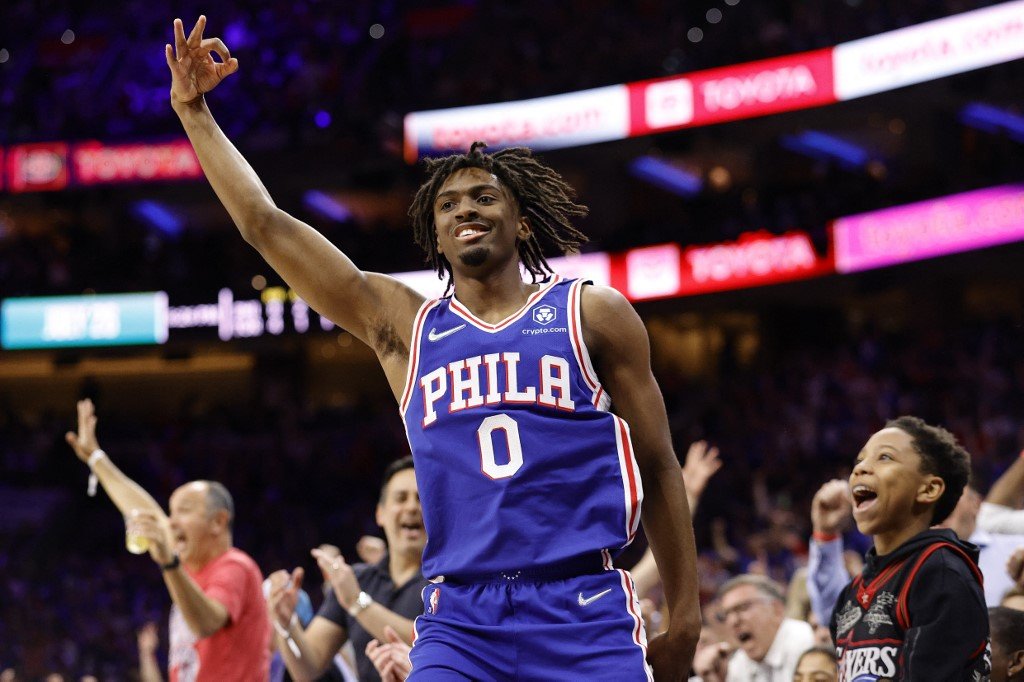 Tyrese Maxey #0 of the Philadelphia 76ers celebrates after scoring in the first quarter against the Toronto Raptors during Game One of the Eastern Conference First Round at Wells Fargo Center on April 16, 2022 in Philadelphia, Pennsylvania. Tim Nwachukwu/Getty Images/AFP

Tyrese Maxey poured in a postseason career-high 38 points and the Philadelphia 76ers earned their first home win over the Toronto Raptors this season in a 131-111 romp in Saturday’s opener of their Eastern Conference first-round playoff series.

Joel Embiid snatched a game-high 15 rebounds to complement 19 points while James Harden dished off a game-high 14 assists while scoring 22 for the Sixers.

The fourth-seeded 76ers overpowered the Raptors, who had beaten them three times during the regular season, including twice in Philadelphia.

The @sixers were powered by the amazing play of @TyreseMaxey (38 PTS) in their Game 1 victory!

The defeat might have cost the fifth-seeded Raptors more than just one game. Star rookie Scottie Barnes, who was in range of a triple-double with 9:06 remaining, had to be helped to the locker room after having his left ankle stepped on by the 280-pound Embiid.

The injury was later labeled a sprain and Barnes could not return, finishing with 15 points and team-highs in rebounds with 10 and assists with eight in his postseason debut.

In becoming the youngest player in 76ers history to top 30 points in a playoff game, the 21-year-old Maxey shot 5-for-8 on 3-pointers and 14-for-21 overall. He recorded the second-most points of his career, one shy of the 39 he booked in January 2021 against the Denver Nuggets.

His previous postseason high, recorded last year as a rookie, was 16 in Game 6 of the Eastern Conference semifinals against the Atlanta Hawks. Maxey totaled just 31 points in the seven-game series.

The 76ers trailed 3-0 after a Fred VanVleet 3-pointer but never again after Harden bombed in a 3-pointer for a 7-5 advantage in the game’s third minute.

Shooting 51.2 percent for the game, the hosts went on to lead by as many as 10 in the first quarter and 21 in the second before keeping the Raptors at arm’s length through the second half.

Harden added four 3-pointers for the 76ers, who scorched the net to the tune of 50.0 percent from deep. The Raptors countered with just 40 percent (12 of 30).

Tobias Harris contributed 26 points to the win, which was accomplished with just four turnovers. The Raptors had just eight in the generally mistake-free contest.

Pascal Siakam paced Toronto with 24 points, while OG Anunoby had 20 and VanVleet 18 before fouling out.