NBA: Suns renew quest for title in opener vs Pelicans 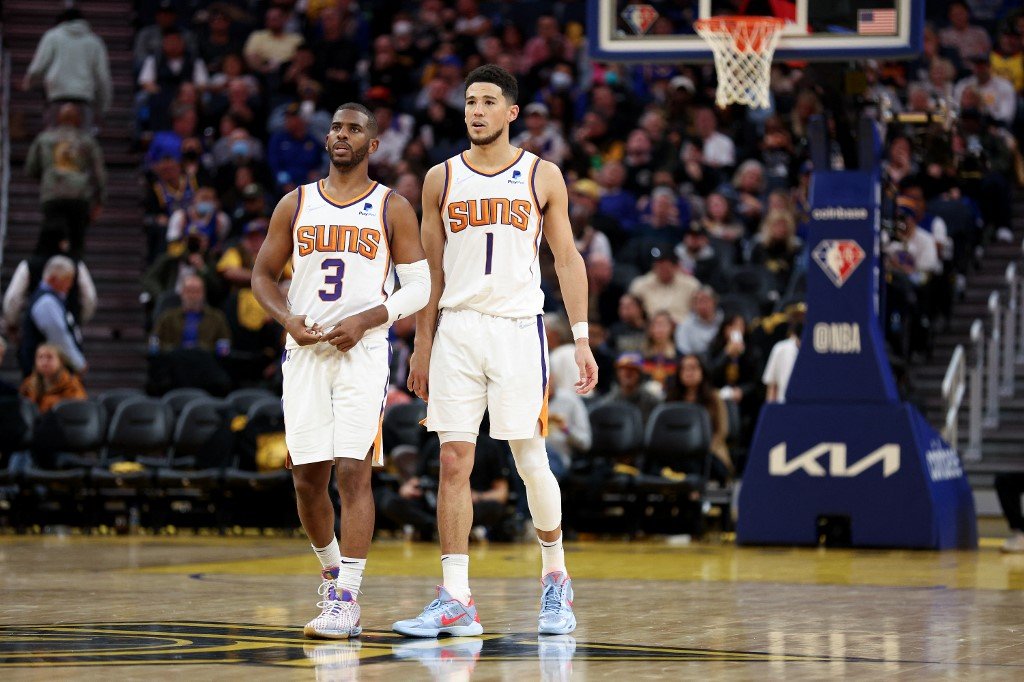 Chris Paul #3 and Devin Booker #1 of the Phoenix Suns stand on the court during their game against the Golden State Warriors in the second half at Chase Center on March 30, 2022 in San Francisco, California. Ezra Shaw/Getty Images/AFP

The Phoenix Suns fell two victories short of an NBA title last season, but they will begin another run at the crown on Sunday night when they host the New Orleans Pelicans in the opening game of a Western Conference first-round playoff series.

The top-seeded Suns rebounded from last season’s disappointing conclusion in the NBA Finals against the Milwaukee Bucks to put together a franchise-best 64-18 record that earned them the No. 1 seed throughout the postseason.

With the West being viewed as weaker than in recent seasons, Phoenix is expected to at least reach the conference finals if not return to the NBA Finals.

“Man, I think we gotta take it just one day at a time,” Paul told reporters. “We talk about it took us a whole year to get back to this point so now I think the question is, ‘What we going to do with this opportunity?’”

Few people saw the eighth-seeded Pelicans being the Suns’ first-round opponent after they started 1-12 and never had the services of star Zion Williamson (foot) during the regular season.

But New Orleans recorded two play-in victories, including a 105-101 road win over the Los Angeles Clippers on Friday, to reach the postseason for the first time since 2017-18. The Pelicans overcame a 13-point, fourth-quarter deficit to beat the Clippers.

New Orleans won eight of its final 13 regular-season games to reach the play-in round and defeated the San Antonio Spurs 113-103 on Wednesday prior to eliminating the Clippers.

“Our guys are great,” New Orleans coach Willie Green said of his players. “That’s how you withstand tough times, with character. We have extremely high-character individuals in our organization. It’s been a joy to go after it with them.”

Brandon Ingram stood out against the Clippers with 30 points, but a stunning effort by Larry Nance Jr. (14 points, 16 rebounds) was a huge help. A midseason trade acquisition of CJ McCollum from the Portland Trail Blazers was a key move that helped set up the late-season success.

Now the 24-year-old Ingram is waiting for reality to set in — he’s in the postseason for the first time in his six-year career. He spent his first three season with the Los Angeles Lakers before being sent to New Orleans as part of the Anthony Davis trade.

“I’ve never had a winning record, I’ve never been to the postseason so to get a chance to showcase my talent on the biggest stage is beautiful,” Ingram told TNT.

The next task is seeing whether or not the Pelicans can give the Suns a battle. A No. 8 seed has beaten a No. 1 just five times — the last occurrence coming in 2012 when the eighth-seeded Philadelphia 76ers defeated the top-seeded Chicago Bulls in six games.

Phoenix went 3-1 against New Orleans in the regular season with Devin Booker averaging 27 points per game.

The Pelicans’ victory was in Phoenix on Feb. 25. The 117-102 triumph came while Paul was sidelined with a fractured right thumb.

The Suns occasionally hear talk that they aren’t as good as their exploits. A veteran like Paul brushes off such chatter but it sticks with younger players like Deandre Ayton and Mikal Bridges.

“A lot of people call us a fluke and we heard the same noise last year,” Ayton said. “And all it does is amp us up.”

Bridges said naysayers come with the territory. He also thinks expectations are high due to last season’s stunning run.

“We’re built for the moment. We love to play, we love hoop and we want to win,” Bridges told Arizona Sports. “I get the pressure part obviously because everybody expects us to win but we expect to win too, so we got high expectations for us.

“We’re ready. We get everyone’s best all year and we love it.”

The Suns could be without backup guard Landry Shamet (left foot) for Game 1. He missed Friday’s practice and coach Monty Williams said he was unsure if Shamet could play. Shamet is listed as questionable.