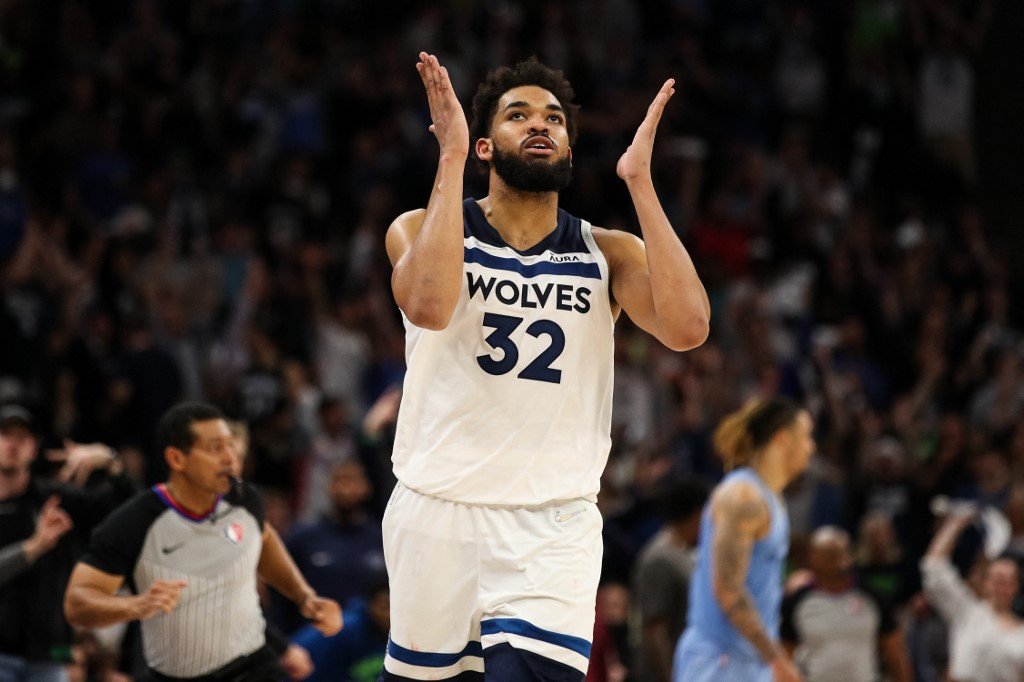 Karl-Anthony Towns #32 of the Minnesota Timberwolves celebrates his three-point basket against the Memphis Grizzlies in the fourth quarter of the game during Game Four of the Western Conference First Round at Target Center on April 23, 2022 in Minneapolis, Minnesota. The Timberwolves defeated the Grizzlies 119-118 to tie the series 2-2. David Berding/Getty Images/AFP

Karl-Anthony Towns responded to one of the worst performances of his postseason career with 33 points Saturday night and the Minnesota Timberwolves evened their playoff series against the visiting Memphis Grizzlies with a 119-118 victory in Game 4.

Towns, whose eight-point effort in a home loss in Game 3 equaled the second-fewest of his playoff career, rebounded with a postseason career-high in helping the seventh-seeded Timberwolves square the series at 2-2.

Unlike two nights earlier, when the Timberwolves blew a big fourth-quarter lead, they managed to hold on this time thanks to stingy defense down the stretch.

After Jarred Vanderbilt turned a D’Angelo Russell assist into a dunk for a 113-107 lead with 2:47 remaining, Minnesota scored just two more points until Anthony Edwards hit two free throws with 8.3 seconds to go.

In the meantime, the Grizzlies had four opportunities to tie or gain a late lead, but they missed two shots and a free throw before Tyus Jones missed from 3-point range with Memphis down just 115-112 with 10.5 seconds left.

The Grizzlies were forced to foul Edwards, whose two foul shots capped a 24-point night.

Towns contributed to two difference-making areas for the Timberwolves, with 3-for-5 success on 3-pointers and 14-for-17 at the free-throw line.

😤 @theantedwards_ was all over the court in Minnesota’s Game 4 win.

All five Minnesota starters scored in double figures, with Patrick Beverley (17 points), Vanderbilt (12) and Russell (10) joining Towns and Edwards. Jordan McLaughlin chipped in with 16 points off the bench, while Towns completed a double-double with a team-high 14 rebounds.

Grizzlies standout Ja Morant was held to a postseason career-low 11 points. He took just 13 shots, making four, while spending much of his night in ball-distribution mode, racking up a game-high 15 assists.

Minnesota held the game’s biggest lead at 52-37 with 4:47 remaining in the second quarter.

But befitting a trend in the series, Memphis countered immediately with 10 straight points, setting up a tight second half.