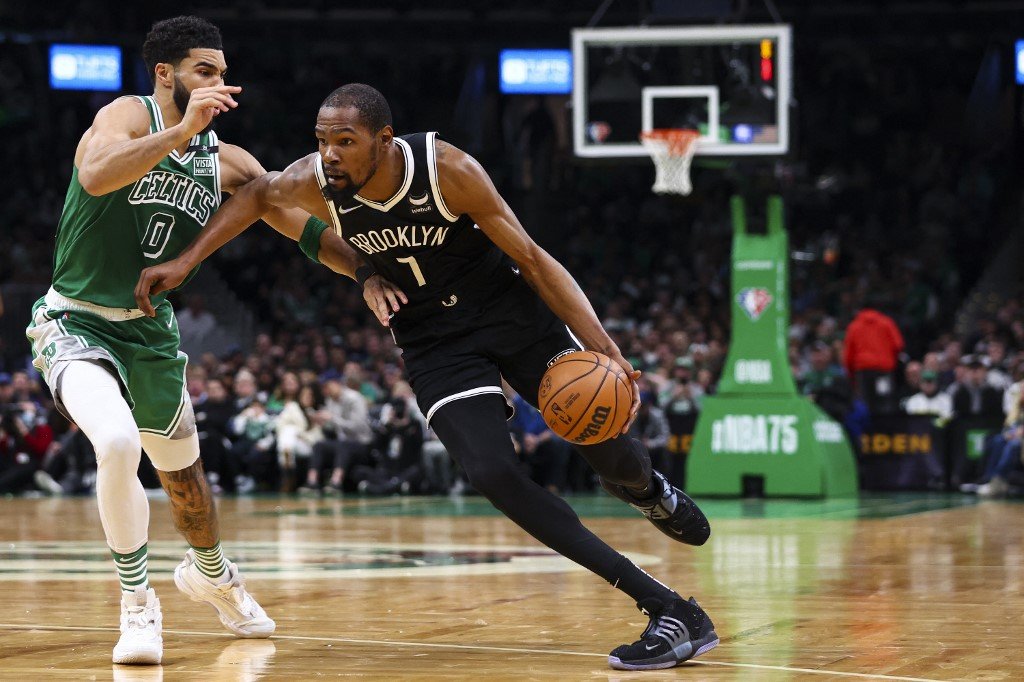 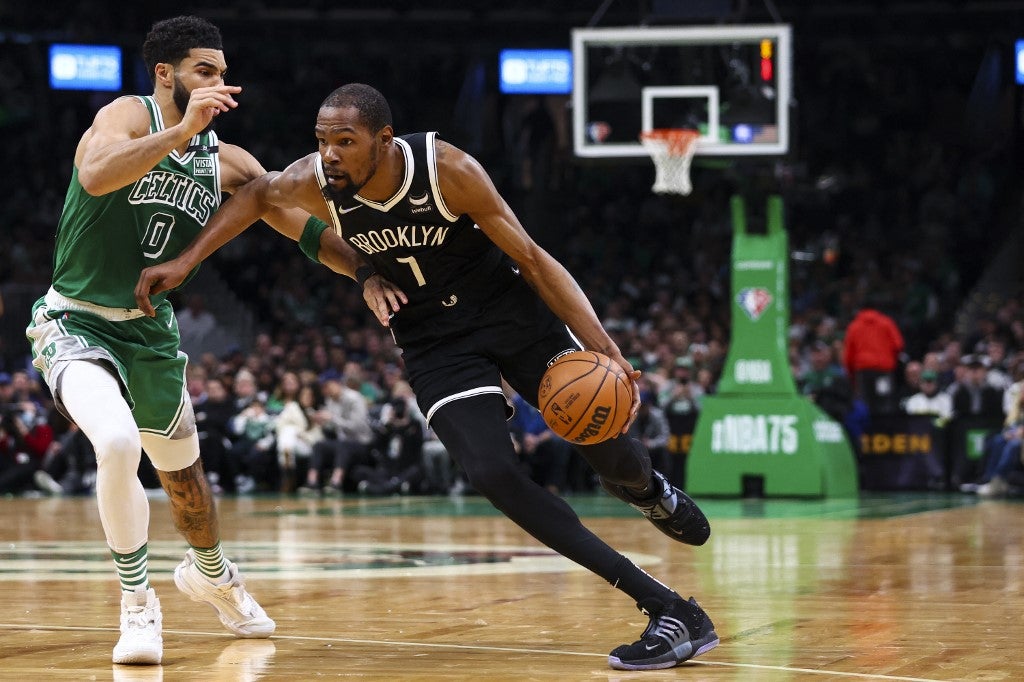 Kevin Durant #7 of the Brooklyn Nets drives to the basket past Jayson Tatum #0 of the Boston Celtics during a game at TD Garden on March 6, 2022 in Boston, Massachusetts. Adam Glanzman/Getty Images/AFP

Team-oriented defense collides with superstar-driven offense in a classic battle of strengths on Sunday when the Boston Celtics and visiting Brooklyn Nets open an Eastern Conference first-round playoff series.

The Celtics led the NBA in several defensive categories, including points allowed, en route to capturing the second seed in the East. They finished seven games ahead of the seventh-seeded Nets.

Surprisingly, Boston was able to overpower Brooklyn offensively in a 3-1 win in the season series. The Celtics rolled up 126, 129 and 126 points in consecutive victories between Feb. 8 and March 6.

The clubs haven’t seen each other in six weeks, during which time much has changed.

The Celtics went 12-4 after their 126-120 home win over the Nets on March 6, turning their attention to defense despite the loss to anchor Robert Williams III to meniscus damage in his left knee.

Boston hasn’t ruled out Williams for the series, but its wishful thinking focuses more on a potential Game 6 or 7 than Sunday’s opener.

The Celtics held their last 16 opponents to an average of 106.1 points. Five opponents in that stretch were held below 100 points.

Celtics rookie coach Ime Udoka, a longtime assistant to Gregg Popovich in San Antonio, believes having six days off leading into Game 1 has benefited him and his team.

“I think nine years of being an assistant, and making the playoffs every year, and playing in a few championships in high-pressure situations has prepared me for this,” he claimed. “I think the team is ready as well.”

And so are the Nets, even though Ben Simmons won’t play in Game 1 as he continues to reportedly make progress toward a potential season debut in the next two weeks.

Brooklyn had to win a play-in game just to make the field, but did just that thanks in large part to its superstar firepower. Kyrie Irving collected 34 points and 12 assists and Kevin Durant added 25 and 11, respectively, in a 115-108 home win over the Cleveland Cavaliers on Tuesday.

The Nets didn’t have Irving when they posted a 123-104 victory at Boston in November. Durant contributed 21 points and eight assists in the win.

Boston needed a 16-9 finish in that one to rally from a late deficit.

While some had projected a Nets-Celtics matchup in the Eastern Finals before the bracket was determined, Irving, a former Celtic, noted there’s no time like the present.

“I wouldn’t say we’d like to avoid them in any way,” Irving said. “This is the best part of the story that could be written. We go against Boston and have a chance to redeem ourselves (for a poor regular season). They have a healthy team, we have a healthy team; now we get to see who’s (better).”