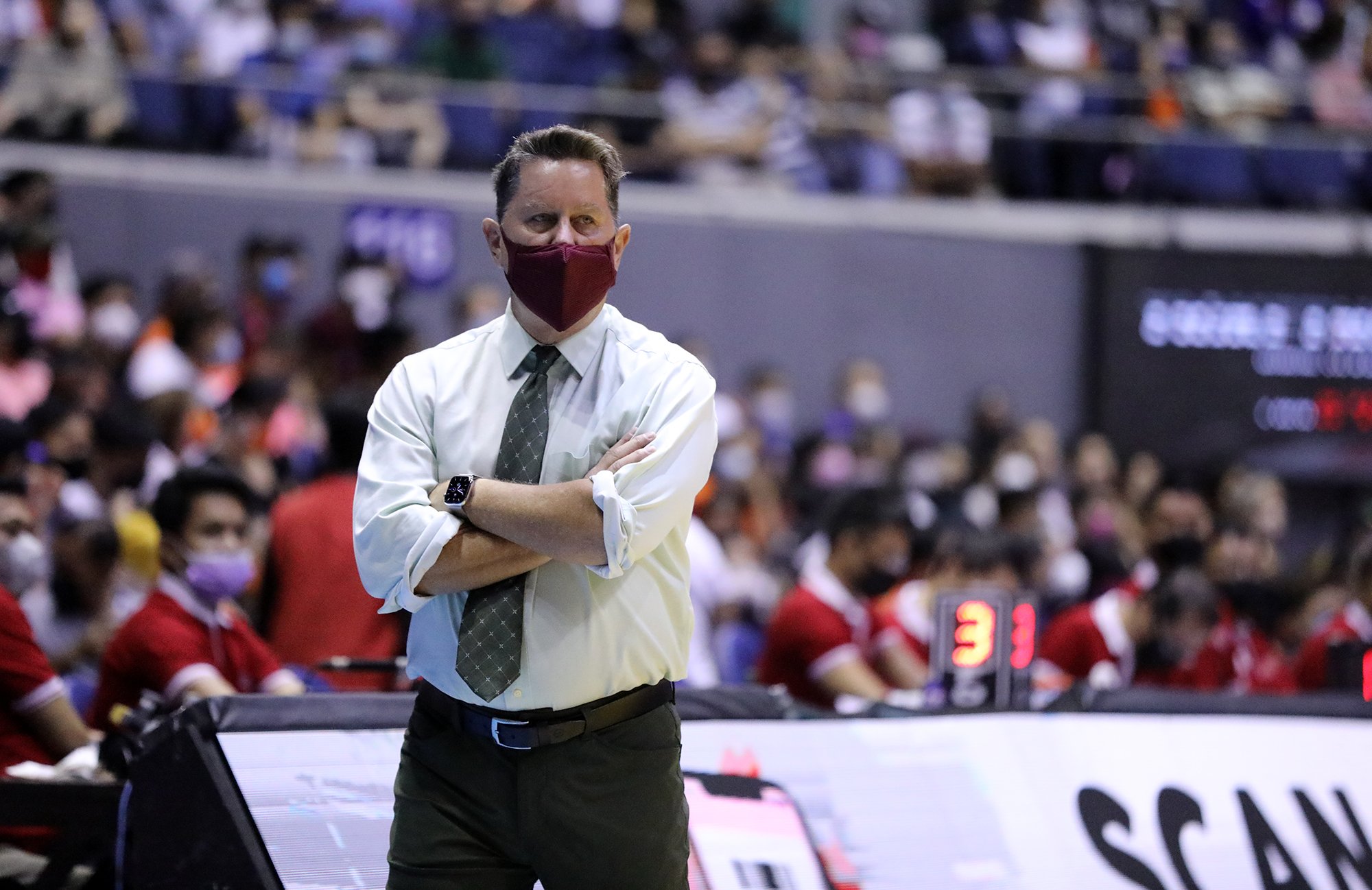 MANILA, Philippines — Barangay Ginebra coach Tim Cone attributed their crucial Game 5 win to his veteran crew, led by Scottie Thompson, after they displayed grace under pressure to stave off Meralco’s late surge and move on the cusp of keeping the PBA Governors’ Cup title.

Thompson and Christian Standhardinger delivered the clutch baskets as Ginebra withstood a gritty Meralco side, 115-110, on Sunday before a roaring 18,251 crowd at Smart Araneta Coliseum.

“I’m fortunate. I got a team who understands things. They’ve been to the wars, they’re veterans. Scottie is still young but he’s been through so many of these things before. They really know how to settle down and they can pick the game through,” said Cone after their Game 5 victory, where Justin Brownlee scored 40 points and 11 rebounds.

“Just really fortunate that I have a veteran team that’s been doing this stuff for awhile. They handled it extremely well,” he added.

When Tony Bishop willed the Bolts from a 14-point deficit and trimmed it to just one, 98-97, in the final 4:31, Standhardinger nailed back-to-back jumpers from midrange to stop the bleeding.

Then, Thompson drilled a clutch triple over Allein Maliksi’s defense to beat the shot clock off his offensive rebound and an assist from a LA Tenorio — to give the Gin Kings a 105-97 breather with 2:16 left.

Thompson, the Best Player of the Conference, who was a rebound shy of a triple-double with 19 points, 11 assists and nine rebounds, said it was a lucky shot after he tried it when he saw the shot clock expiring with four seconds left.

“I just saw the clock expiring four or three seconds to go. So I attempted a shot when I had a little space from Allein Maliksi’s (defense). It was a lucky shot,” Thompson said.

Cone said it wasn’t a lucky attempt as he has witnessed Thompson working on his shots over the past seasons.

“That was a pure shot. It went through so cleanly, no luck involved in that shot. That’s a lot of hard work he’s put in the gym  in the last four to five years in making that shot,” the Gin Kings coach said.

And the same goes for Standhardinger’s clutch mid-range jumpers to highlight his 13-point and seven-round outing.

“Big clutch moment for Christian. Really clutch,” Cone said. “Two really crucial ones. He’s (Standhardinger) knocking down his jumper and that is awesome because that adds a weapon to his game and people can’t just sit on the paint on him. He works really hard on his shot. You can’t believe how hard he works every practice.“

Ginebra shoots for its 14th PBA title and fourth finals series victory over Meralco in Game 6 on Wednesday. But Cone warns it won’t be easy as he braces for the Bolts’ fightback.

“It seems that it’s close but It’s still very far away. We were in this situation and they forced Game 7. We know that trying to beat this good team three times in a row is nearly impossible,” he said. “We’re gonna try our best to focus and get ready.”