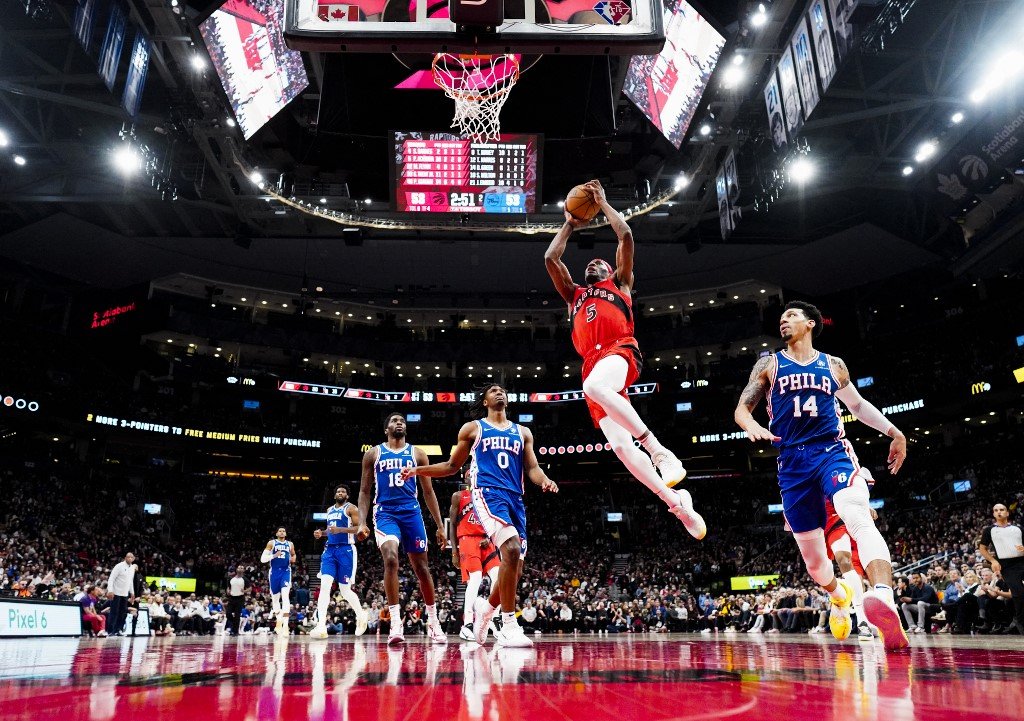 FILE– Precious Achiuwa #5 of the Toronto Raptors goes to the basket against Danny Green #14 of the Philadelphia 76ers during the second half of their basketball game at the Scotiabank Arena on April 7, 2022 in Toronto, Ontario, Canada. Mark Blinch/Getty Images/AFP

The Toronto Raptors will be out to continue a winning streak on the Philadelphia 76ers’ home floor Saturday night when the Atlantic Division rivals open an Eastern Conference first-round playoff series.

The fourth-seeded 76ers enter the best-of-seven matchup as the favorite, having finished three games ahead of the fifth-seeded Raptors in the regular season. But Toronto captured the season series 3-1, winning both games at Philadelphia.

The 76ers outshot the Raptors from the floor, on 3-pointers and from the foul line in the four meetings, but were still outscored 436-425.

Toronto’s Chris Boucher got the better of 76ers MVP candidate Joel Embiid in plus/minus in the series, with Boucher recording a plus-22 in four games, while Embiid posted a plus-11 in three. Embiid missed the first meeting – a 115-109 home loss in November – due to COVID issues.

The ups-and-downs of the season series were similar to the dramatic seven-game playoff series the clubs played in 2019, with the Raptors winning on Kawhi Leonard’s curtain-closing 3-pointer.

“Both teams were pronounced dead about three times,” he recalled, “and it went down to the last second.”

One of the advantages the 76ers had during the season series was at the foul line, where they attempted 30 more free throws than the Raptors and made 27 more.

But 76ers coach Doc Rivers isn’t sure this series will be officiated the same way.

“My only concern in the playoffs is, I believe – and I assume the league would say no – but I do believe they allow you to play more,” Rivers said. “Especially as each game goes on, it feels like the game gets more physical. I don’t even know if that’s to our advantage or not.

“What I don’t want, and I think it happened the other night … Joel got fouled the first four plays of the game. And then he got murdered on the fifth one and there was a no-call. And it was almost like, ‘We can’t call five in a row.’ We don’t want that, either. We just want it called consistently, whatever it is.”

The teams have met twice since the 76ers made their big in-season move to acquire James Harden.

After torching the Raptors for 28 points in a road win for his previous team, the Brooklyn Nets, in November, Harden was limited to 15.0 points per game on 8-of-24 shooting in a pair of five-points losses for the 76ers.

Thechikottukavu Ramachandran: The 'killer' Indian elephant who's loved and feared