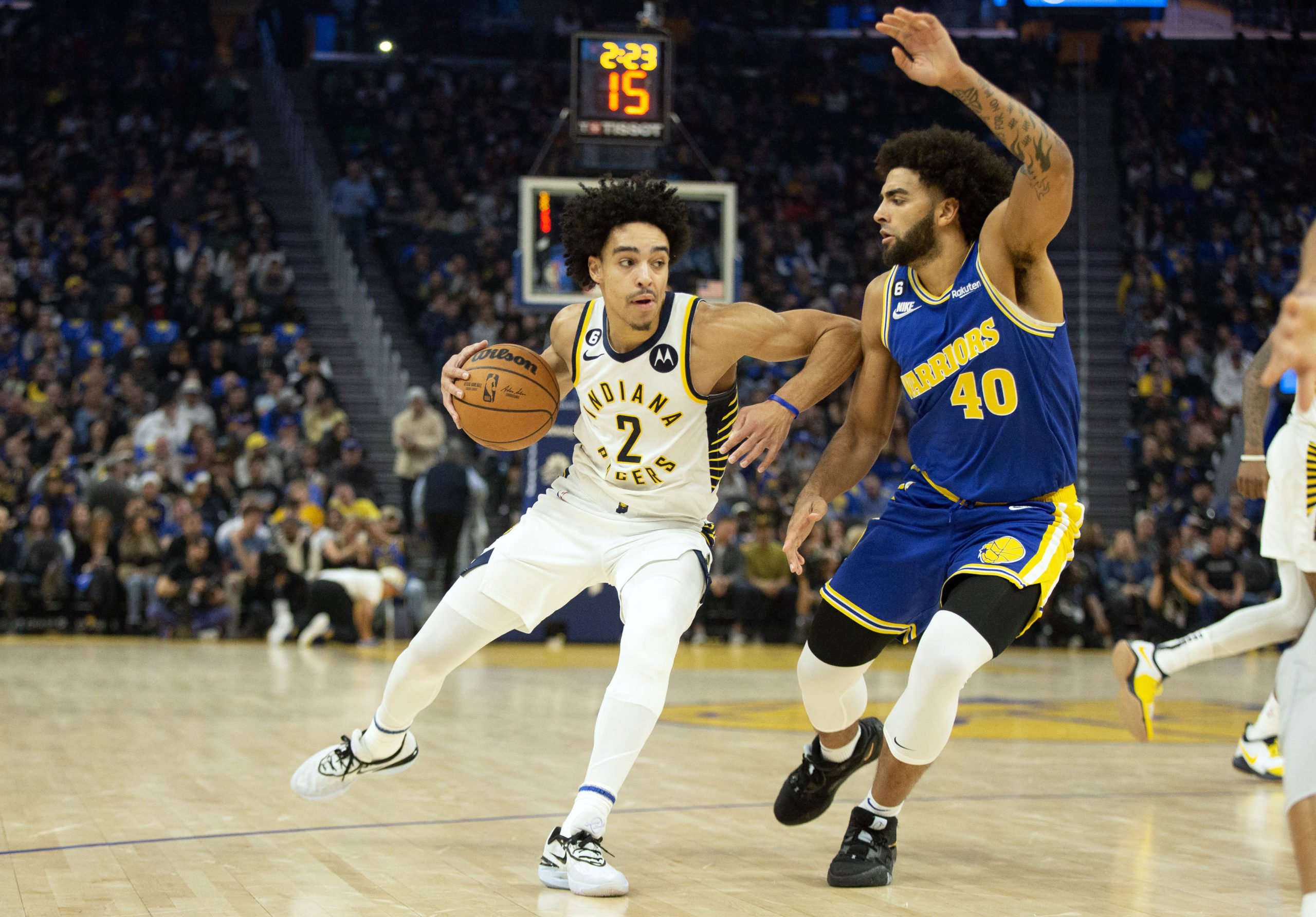 Andrew Nembhard continued a memorable California swing with a personal eight-point flurry as part of a late 13-2 burst that allowed the road-weary Indiana Pacers to shock the Golden State Warriors 112-104 in San Francisco on Monday night.

Facing a team that had won 10 straight at home on the second night of a back-to-back without star Tyrese Haliburton, the Pacers led by as many as 16 points and then, surprisingly, had enough energy to finish off the defending champions.

Playing without Andrew Wiggins, the Warriors trailed 89-81 entering the fourth quarter, but then stuck a nose in front at 93-92 on a Klay Thompson 3-pointer with 9:25 to play.

The hero of Indiana’s lone win in its previous five games, Nembhard gave the Pacers the lead for good with a 30-foot 3-pointer with 4:26 to go.

He then fed Isaiah Jackson for an alley-oop dunk before bombing in another 3-pointer followed by a jumper to give the Pacers a 109-102 lead with 2:36 remaining.

The Warriors, who hadn’t lost at home since a visit by Denver in the first week of the season, never recovered, allowing the Pacers to improve to 2-4 on a trek that wraps up Wednesday at Minnesota.

“I just thought they came in, out-played us,” Warriors coach Steve Kerr said. “Out-coached us.”

🔥 31 PTS | 8 REB | 13 AST | 5 3PM @AndrewNembhard dropped career-highs across the board as he led the @Pacers to the W! #NBARooks | #BoomBaby pic.twitter.com/urvUeTTOVQ

Nembhard also found time for 13 assists — three more than any previous game — and eight rebounds, which was a season high by two.

The Pacers gave him plenty of support as Buddy Hield had 17 points, Jalen Smith 15, Bennedict Mathurin and Oshae Brissett 14 apiece and Jackson 13.

Hield added four 3-pointers to Nembhard’s five, helping the Pacers outscore the Warriors 45-39 from beyond the arc. Golden State went just 13-for-44 on its 3-point attempts.

Thompson paced the Warriors with 28 points, shooting 8-for-16 on 3-pointers while his teammates went just 5-for-28.

Jordan Poole added 23 points, but went just 2-for-8 from deep, while Curry had a miserable game, finishing with 12 points and a team-high six assists while shooting 3-for-17 overall and 2-for-10 on 3-pointers.

Jonathan Kuminga and Donte DiVincenzo chipped in with 10 points apiece for Golden State, which began the night with the best home record in the NBA.