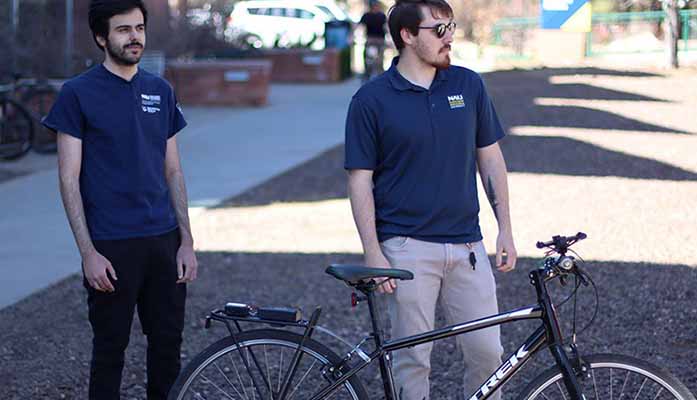 FLAGSTAFF – A team of Northern Arizona University engineering students and professors has created a sensor that connects to a bicycle to detect dips and jolts in pathways, identifying pavement and dirt in need of repair.

The prototype, housed in two small black boxes attached above the bike’s rear wheel, sends the information to an app on the rider’s phone, which connects to a larger network that local municipalities can access to schedule repairs to bike paths and increase bike safety.

The team hopes its Instrumented Bike project will lead to increased bicycle use across the United States, which isn’t known for widespread day-to-day bicycle transportation.

“We kind of have this category of bicyclists that we call ‘interested but concerned,’ or maybe they’re interested in using a bike, but they don’t if they don’t feel safe,” said Brendan Russo, an associate professor of civil engineering at NAU who worked on the capstone project – meaning that for some team members, it’s the culminating project of their educational careers.

The idea came about when members of the team, which is a mix of graduate and undergraduate students, noticed that cars and other vehicles have such sensor systems, and they wondered why one doesn’t exist for bicycles. For example, Ford Motor Co., Detroit and the company Tactile Mobility are using tactile sensors to map city’s streets and locate potholes.

“We thought that it would be a really good opportunity for us to start a project on how do we connect bicycles to build a network for cyclists,” said Chun-Hsing Jun Ho, a professor of civil engineering and the team’s leader.

The team is researching ways to integrate the sensors into bike designs, and it’s looking for a company to manufacture the sensors.

Do Dims Need Trump to Hold Their Cynical Rot Together? – Arizona Daily Independent