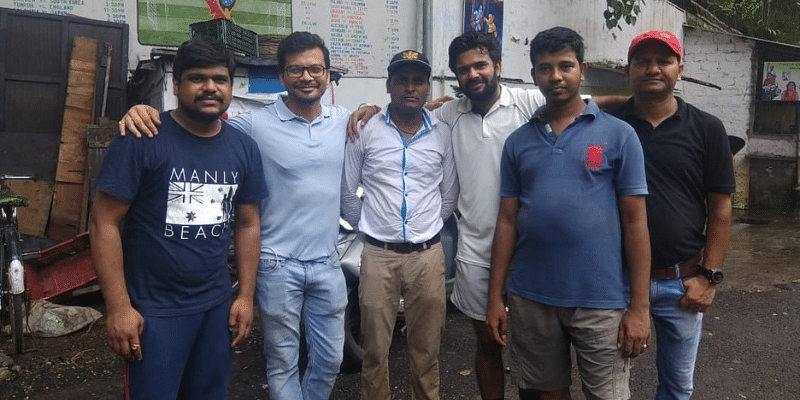 Imagine spending a hot and sultry day without water. No water to drink, shower, or do laundry with. Tough to visualise, isn’t it?

However, the possibility of having to deal with this is becoming more real owing to mismanagement of water resources and climate change.

Several people across India have been grappling with water scarcity over the last few years.

In another report published by the Niti Aayog, a total of 21 cities in the country are poised to run out of groundwater by 2020, owing to leakage losses and lack of proper infrastructure.To tackle this growing problem, two Kolkata-based residents are now attempting to fix roadside public taps across the city. Ajay Mittal (28) and Vinay Jaju (36) have not only put in their individual efforts, but also initiated a citizen’s movement, ‘Active Citizens Together for Sustainability (ACTS),’ involving 500 people to scale their water conservation endeavour.

The duo, along with the support of the citizens group, have saved gallons of water, by fixing 156 leaking taps across Kolkata in a span of three months.

“The Asian Development Bank pointed out last year that over 30 percent of water supplied by the Kolkata Municipal Corporation was being wasted due to leaky taps. And, when I dug deeper, I got to know that the city consumes the highest amount of water in India with the number running up to 600 litres per person. Since community-led drives hold the power to resolve most societal problems, I decided to pull in some like-minded individuals,” Ajay Mittal, Founder, ACTS, tells SocialStory.

Citizen engagement at its best

In June 2019, Kolkata was facing severe water shortage due to indiscriminate extraction of groundwater and wastage. Vijay Agarwal, owner of a travel company and an active member of the ACTS group, noticed this while dropping his son off to school.

Kolkata saw an alarming level of pollution in 2017.

“I was at Chetla in the southern part of Kolkata and was going to drop my son at Sri Sri Academy School when I observed a tap that was continuously leaking. Soon, I realised that many such roadside taps kept discharging water due to broken valves. That’s when I approached Ajay to see if something can be done,” Vijay says.

Soon, all members of ACTS got together with a mission to fix leaking taps across the city. While a bunch of people went around Kolkata identifying leaking taps, others coordinated with nearby plumbers to get them mended. After putting in efforts for three months, the citizenry got 156 of them fixed, thereby saving an enormous amount of water. Some of the areas they covered were Mominpur, Ekbalpur, Kasba, Bhawanipur, Hazra, and Peara Bagan.

“A lot of people in the group started calling the initiative – ‘Fix it for Life’ and we let it be. I feel this is example of how even a big problem can be dealt with the simplest of solutions. All we had to do was gather some money from members, and get a plumber to fix all the community taps,” Ajay notes.

How it all began

Ajay and Vinay met each other while working with AIESEC, an international youth-run organisation, where they used to have multiple conversations about the detrimental effects of poor air and water quality in Kolkata.

In 2017, when the city experienced one of the highest levels of pollution, endangering not only the environment, but also the health of the people, the duo decided to step in.

A campaign organised by ACTS to spread awareness about air pollution.

“We thought that one of the best ways to bring about large-scale change would be through active participation of citizens. Hence, we hosted a meeting by inviting several from our network – doctors, environmentalists, students, founders of NGOs, and even residents. Fortunately, most of them happily extended their support and we kicked off the ‘Kolkata Clean Air’ campaign in 2017,” Ajay recollects.

The objective of the campaign was to spread awareness about air pollution and also help people incorporate lifestyle changes to ensure the city could breathe clean air. The group conducted a plethora of events like walkathons, conferences, workshops for students, yoga sessions, and others, to support the cause.

An ACTS yoga session in progress with the aim of promoting healthy breathing and clean air.

The pursuit to save water

Akash Shaw, a resident of Mominpur, faced inconvenience in his locality due to water scarcity, but is now happy that the situation has been resolved – to a certain extent.

Citizens getting together to fix a pipe with the help of a plumber .

“Many a times, we had to run from one place to another to source water. Long queues for tankers and minor altercations while sourcing water had become a common phenomenon. However, a bunch of enthusiastic citizens got to Mominpur, fixed all the leaking taps, and eased our difficulties,” he says.

Ajay and Vinay’s efforts are an ideal example of a successful citizen-led movement to make the neighbourhood more liveable by saving water. The drive in the last few months was so effective that an additional officer from the local police station, Siddhartha Chatterjee, in charge of Bowbazar area, supported them.

Members of Active Citizens Together for Sustainability (ACTS) with the local police.