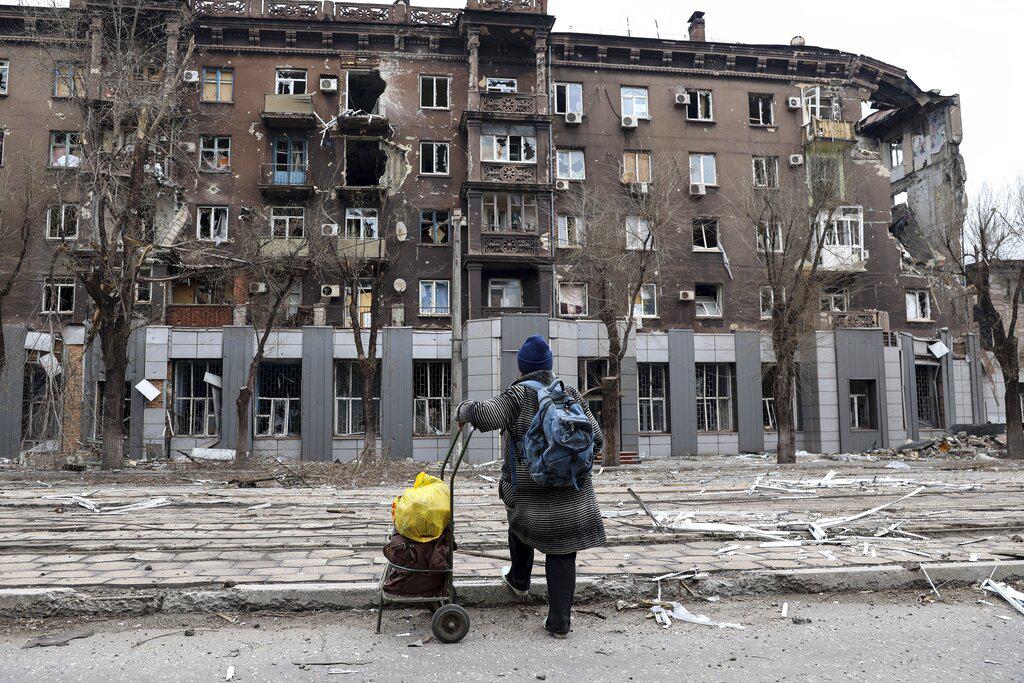 A local resident looks at a damaged during a heavy fighting apartment building near the Illich Iron & Steel Works Metallurgical Plant, the second largest metallurgical enterprise in Ukraine, in an area controlled by Russian-backed separatist forces in Mariupol, Ukraine, Saturday, April 16, 2022. Mariupol, a strategic port on the Sea of Azov, has been besieged by Russian troops and forces from self-proclaimed separatist areas in eastern Ukraine for more than six weeks.

KYIV, Ukraine  — The shattered port city of Mariupol appeared on the brink of falling to the Russians on Sunday after seven weeks under siege, in what would give Moscow a crucial success following its failure to storm the Ukrainian capital and the sinking of its Black Sea flagship.

The Russian military estimated that 2,500 Ukrainian fighters were holding out at a hulking steel plant with a warren of underground passageways in the last pocket of resistance in Mariupol.

Moscow set a midday deadline for their surrender, saying those who laid down their arms were “guaranteed to keep their lives.” But the defenders did not submit, just as they rejected previous ultimatums.

“We will fight absolutely to the end, to the win, in this war,” Ukrainian Prime Minister Denys Shmyhal vowed on ABC’s “This Week.” He said Ukraine is prepared to end the war through diplomacy if possible, “but we do not have intention to surrender.”

The capture of Mariupol would free up Russian forces to join an expected all-out offensive for control of the Donbas, the industrial region in the country’s east where the Kremlin has focused its war aims after abandoning, for now at least, any attempt to take Kyiv, the capital.

The relentless bombardment and street fighting in Mariupol have left much of the city pulverized and killed at least 21,000 people, by the Ukrainians’ estimate. A maternity hospital was hit by a lethal Russian airstrike in the opening weeks of the war, and about 300 people were reported killed in the bombing of a theater where civilians were taking shelter.

An estimated 100,000 remained in the city out of a prewar population of 450,000, trapped without food, water, heat or electricity in a siege that has made Mariupol the scene of the some of the worst suffering of the war.

“All those who will continue resistance will be destroyed,” Maj. Gen. Igor Konashenkov, the Russian Defense Ministry’s spokesman, said in announcing the latest ultimatum.

He said intercepted communications indicated there were about 400 foreign mercenaries along with the Ukrainian troops at the Azovstal steel mill, a claim that could not be independently verified.

Ukrainian Deputy Defense Minister Hanna Malyar described Mariupol as a “shield defending Ukraine” as Russian troops prepare for the battle in the Donbas, where Moscow-backed separatists already control some territory.

In a reminder that no part of Ukraine is safe, Russian forces carried out missile strikes Sunday near Kyiv and elsewhere in an apparent effort to weaken Ukraine’s military capacity before the anticipated assault.

After the humiliating loss of the flagship of its Black Sea Fleet to what the Ukrainians boasted was a missile attack, Russia’s military vowed Friday to step up strikes on the capital. The Kremlin said Sunday that it had attacked an ammunition plant near Kyiv overnight with precision-guided missiles, the third such strike in as many days.

Russia also claimed to have destroyed Ukrainian air defense radar equipment in the east, near Sievierodonetsk, as well as several ammunition depots elsewhere.

Explosions were reported overnight in Kramatorsk, the eastern city where rockets earlier this month killed at least 57 people at a train station crowded with civilians trying to evacuate ahead of the Russian offensive.

A regional official in eastern Ukraine said at least two people were killed when Russian forces fired at residential buildings in the town of Zolote, near the front line in the Donbas.

Malyar, the deputy defense minister, said the Russians continued to hit Mariupol with airstrikes and could be getting ready for an amphibious landing to beef up their ground forces.

Capturing the city would be Russia’s biggest victory after two months of costly fighting and could help reassure the Russian public amid the worsening economic situation from Western sanctions.

It would allow Russia to secure a land corridor to the Crimean Peninsula, which it annexed from Ukraine in 2014, and deprive Ukraine of a major port and its prized industrial assets.

Mariupol’s seizure also would make more troops available for the offensive in the east, which, if successful, would give Russian President Vladimir Putin a vital piece of the country and a badly needed victory that he could sell to the Russian people.

Tunnels at the sprawling Azovstal steel mill, which covers an area of more than 11 square kilometers (over 4.2 square miles), have allowed the defenders to hide and resist.

Ukrainian President Volodymyr Zelenskyy said the fall of Mariupol could scuttle any attempt at a negotiated peace.

“The destruction of all our guys in Mariupol — what they are doing now — can put an end to any format of negotiations,” Zelenskyy said in an interview with Ukrainian journalists.

In his nightly address to the nation, Zelenskyy called on the West to send more heavy weapons immediately if there is any chance of saving the city, adding Russia is “deliberately trying to destroy everyone who is there.”

Austrian Chancellor Karl Nehammer, who met with Putin in Moscow this week — the first European leader to do so since the invasion Feb. 24 — said the Russian president is “in his own war logic” on Ukraine.

In an interview on NBC’s “Meet the Press,” Nehammer said he thinks Putin believes he is winning the war, and “we have to look in his eyes and we have to confront him with that, what we see in Ukraine.’’

Like Mariupol, the northeastern city of Kharkiv has been a target of attacks since the early days of the invasion and has seen conditions deteriorate ahead of the eastern offensive.

The barrage slammed into apartment buildings and left the streets scattered with broken glass and other debris, including part of at least one rocket. Firefighters and residents scrambled to douse flames in several apartments.

Zelenskyy estimated that 2,500 to 3,000 Ukrainian troops have died in the war.

Amid the fighting, Zelenskyy spoke in his nightly address about Ukraine’s plans for a memorial “to remind all generations of our people of the brutal and senseless invasion Ukraine has been able to fend off.”

Pope Francis made an anguished Easter Sunday plea for peace in the “senseless” war in Ukraine.

“May there be peace for war-torn Ukraine, so sorely tried by the violence and destruction of this cruel and senseless war into which it was dragged,” Francis said, without mentioning Putin’s decision to invade.

“Please, please, let us not get used to war,″ Francis pleaded.

Chernov reported from Kharkiv. Yesica Fisch in Kramatorsk, Ukraine, and Associated Press journalists around the world contributed to this report.