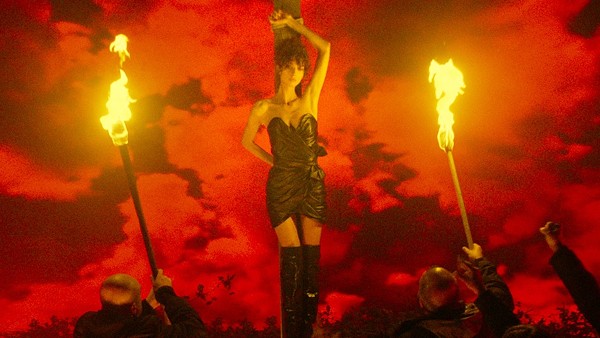 There’s a lot at stake in Gaspar Noé’s Lux Æterna, but the provocateur largely resigns himself.

Witches provide the central thread of Lux Æterna, a 51-minute experimental French-language work by Gaspar Noé that opens at Cinema Detroit this weekend. (Produced in 2019, it seems to have scored a U.S. release in conjunction to his more recent feature, the dementia-centered Vortex, which is currently playing in a brief run at the Historic Howell Theater, but nowhere nearer for the time being.)

For a director best known for his efforts to approximate primal, psychedelic sensory experiences, Noé’s works carry a strong penchant for Brechtian interruption, frequently puncturing their action to step outside themselves and address their viewers. In Lux, this becomes more than a tendency; approximating a character’s experience onscreen is largely besides the point. Here, instead, Noé’s attentions are trained on a near-direct address to the viewer and their own experience throughout, making the metatext – focused chiefly on the experience of producing and of watching works like Lux – the film’s primary reason for being.

This might be for the best, as Noé’s never proven much of a naturalist, struggling often to deliver dialogue and characters that feel credible as more than devices, even when taken on their own terms. (In Lux’s scattered subplots, this weak point is evident as ever). He’s long been more at home with evoking more totalizing experiences: sensations like dissociation (Enter the Void), ecstasy (Climax), or abjection (Irréversible), with each effort marked by a taste for extremity stemming from what feels, at least to this writer, to be coming from a sincere place. Here, in what the filmmaker’s termed an “essay,” the entire focus is on the more abstractly experiential process of making and consuming art. The normally freeing pretense of fiction is largely dropped by the end of the film’s opening scene.

After an intertitle quoting Fyodor Dostoevsky (on the “supreme happiness an epileptic feels in the moments before a fit”), a warning regarding the film’s flashing lights, and several nods to the Danish filmmaker Carl Theodor Dreyer, who dealt both with witches and with female martyrs, we meet two performers on the stage that gives Lux its setting. Finding Béatrice Dalle and Charlotte Gainsbourg lounging before a fireplace as actresses (basically their real-life selves) on the set of a midnight movie retreading Dreyer’s themes, the film oscillates between split- and single-screen framings that spotlight each woman separately or the fire that’s before them, carving up the physical space of the movie in what might approximate a multi-camera shooting setup: a way of “revealing” the production of the scene. When Dalle asks early in the film “Have you been burned at the stake?”, the fire that creates an intimate conversational space for them becomes a kind of portent, blending the film’s own narrative material with the actresses’ own recountings (often paralleled via neighboring frames) of their experiences as women in the industry. Though pitched languidly, the scene brings a good-humored address to the exploitation, embarrassment, and more surprising rewards of work on set, achieving a sparkling air of candor. Rare for Noé, it allows each actress to breathe, laugh, and gesture freely with dialogue that appears at least semi-improvised; it’s probably Lux’s film’s best part.

From that modest peak, Lux Æterna launches into more familiar territory, chronicling the increasingly chaotic behind-the-scenes of a film set: one populated by blithe misogynists, creative egomaniacs, clock-punching technicians, and desperate industrial climbers. For film viewers of the past century, such self-effacing satire won’t be too unfamiliar, trodden as it is from works ranging from 1952’s The Bad and the Beautiful to 1996’s Irma Vep, albeit with varying degrees of sharpness. Even so, cinematographer (and regular Noé collaborator) Benoît Debie makes the most of the film’s oscillating visual schema, forcing shots arrayed side by side to clash against or harmonize with one another, as the sound mix has them do the same. Moving between dressing rooms, hallways, and alternate sets, most bathed in low-intensity neon light, Lux Æterna toys with ways of addressing its audience as its pace and pulse accelerate steadily throughout.

Such a progression, escalating from the mundane and workaday to the heatedly abstract, will likewise be familiar to Noé’s own viewers – especially of 2018’s Climax, which saw the film’s backstage drama speeding into an intense, acid trip-aligned whirl and eventual inevitable collapse. With gendered tensions heightening throughout between the film’s women performers and its largely male heads of crew, Noé works to make Lux’s statements encircle the medium that it’s a part of, along with the industrial dynamics dating to its origins. Addressing various forms of voyeurism, exploitation, and rampant, stratified forms of inequality, in part by suggesting they may well be eternal, the film’s ensuing flight into abstraction could well be construed as a kind of aesthetic cowardice.

When a red-green-blue color scheme erupts into the shoot’s proceedings, it evokes not only three-strip technicolor and the tinted plates that once marked silent films but also more contemporary processes of pixelated digital photography. By suggesting that the medium’s long-running power disparities may be as entrenched as these technology-spanning aesthetic processes, though, Lux’s maker is in a way having his cake and eating it, too, offering a critique of processes he’s pointedly a part of. There’s a kind of ego, too, to this; by claiming to be part of a grand and often exploitative historical cycle alongside the filmmakers he invokes (masters of the form including Dreyer, Jean-Luc Godard, or Luis Buñuel), Noé’s both flattering himself and arguing that he has no higher obligations to his cast and crew than did his many predecessors.

Such two-handed processes are in some way at the heart of satire, though, and this pessimism feels in some way more welcome than the view of the sap artists that suggest history to be some march of progress. In its best moments, Lux’s awareness of the industry’s long-standing power dynamics seems to give it something. In the scenes where its actresses are framed in isolation, away from men – whether together or on the phone — they’re allowed to give the film its most convincing moments, overtaking the weaker elements of what surrounds them both in the film’s production and on the screen. In this way, Lux is part of the aesthetic tradition it both examines and claims for itself: certainly a very old one. But as so often has fortunately happened within that vein, the directorial ego at play here and the gender dynamics in play fail to absolve Noé and his collaborators’ work of its best and most affecting parts.