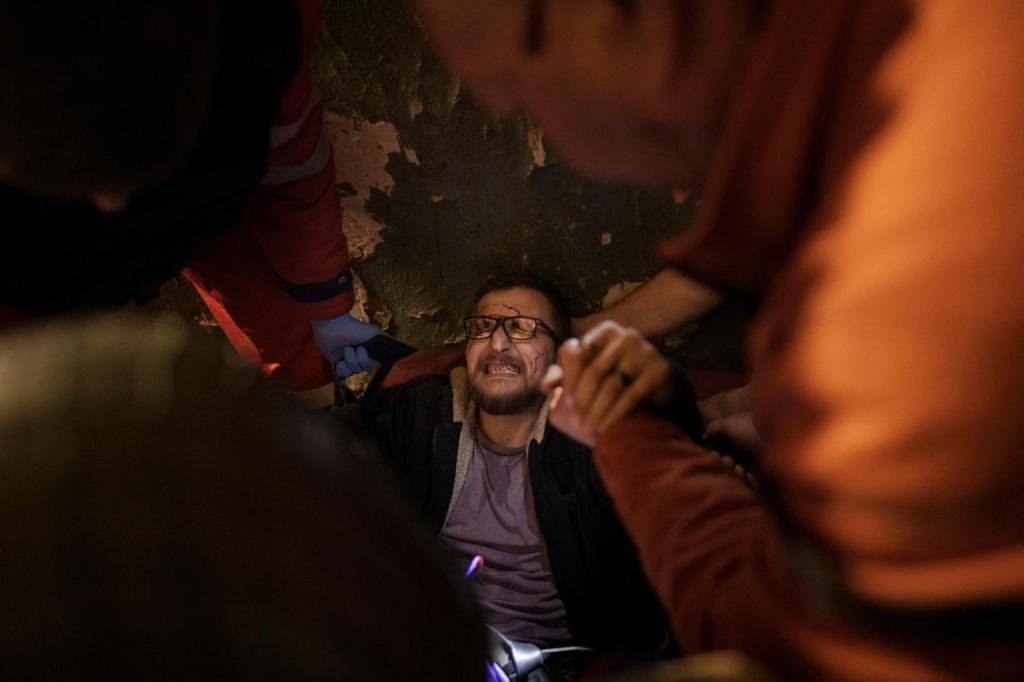 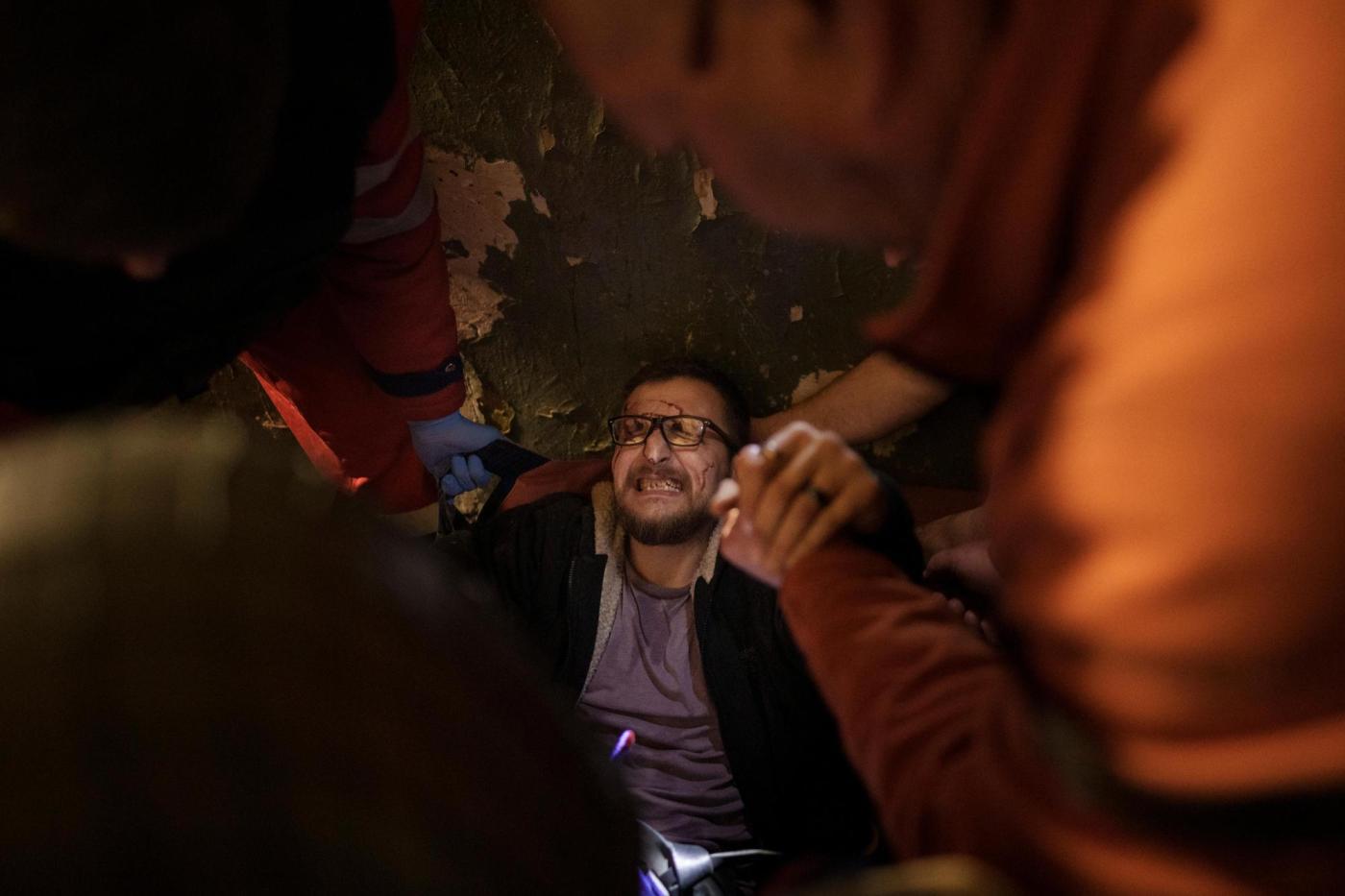 By The Associated Press

RIYADH — Russian President Vladimir Putin spoke with Saudi Crown Prince Mohammad bin Salman on Saturday, their second call since the start of Russia’s invasion of Ukraine. The Saudi Press Agency said the two discussed bilateral relations and “ways of enhancing them in all fields.”

The Saudi readout of the call said the crown prince affirmed support for efforts that would lead to a political solution to the crisis in Ukraine. The kingdom recently announced $10 million in humanitarian aid for Ukrainian refugees.

The Kremlin’s statement added the two also discussed the ongoing conflict in Yemen, where a Saudi-led coalition has been at war for years, as well as their joint work on an oil output agreement, known as OPEC+. The oil pact has kept a cautious lid on production by major producers, supporting oil prices.

Ukraine has urged nations around the world to cut their dependency on Russian oil imports that it says finance Russia’s military war on Ukraine.

KEY DEVELOPMENTS IN THE RUSSIA-UKRAINE WAR:

— Ukraine war far from over as Russia renews strikes in Kyiv

— ‘We pray for you’: Ukrainian Jews mark Passover, if they can

— Ukraine’s port of Mariupol holds out against all odds

— War Crimes Watch: The woman who would make Putin pay

— Go to https://apnews.com/hub/russia-ukraine for more coverage

KYIV, Ukraine — Russian forces shelled an oil refinery in the Ukrainian city of Lysychansk on Saturday, and a large fire erupted, a regional governor reported.

Luhansk regional governor Serhiy Haidai said it wasn’t the first time the refinery was targeted and accused the Russians of trying to “exhaust” local emergency services. He underlined there was no fuel at the refinery at the time of the attack and “the remains of oil sludge” were burning.

Ukraine’s presidential office reported Saturday that missile strikes and shelling over the past 24 hours occurred in eight regions: Donetsk, Luhansk and Kharkiv in the east, Dnipropetrovsk, Poltava and Kirovohrad in the central Ukraine and Mykolaiv and Kherson in the south. The strikes underlined that the whole country remained under threat despite Russia’s pivot toward mounting a new offensive in the east.

In Kharkiv, nine civilians were killed and more than 50 were wounded on Friday, while in the wider region two were reported dead and three wounded, according to the report.

The southern Mykolaiv region was battered Friday and Saturday. According to the presidential office, airstrikes Friday killed five and wounded 15. The head of regional legislature, Hanna Zamazeyeva, said Saturday that 39 people have been wounded in the past 24 hours.

Zamazeyeva said the targets included several residential blocks “where there are no military facilities.”

The besieged Ukrainian port city of Mariupol is still holding out, but the situation there is critical.

KYIV, Ukraine — Ukraine’s Deputy Prime Minister Iryna Vereshchuk said in televised remarks on Saturday that 700 Ukrainian troops and more than 1,000 civilians — more than half women — are currently being held captive by the Russians.

Vereshchuk said Kyiv intends to swap the captive soldiers, since Ukraine holds about the same number of Russian troops but demands to release the civilians “without any conditions.”

FORT IRWIN, Calif. __ U.S. Army trainers are using lessons learned from the Russian war against Ukraine as they prepare soldiers for future fights against a major adversary such as Russia or China. T he role-players in this month’s exercise at a training center in California’s Mojave Desert speak Russian and the enemy force is using a steady stream of social media posts to make false accusations against the American brigade preparing to attack. In the coming weeks, the planned training scenario for the next brigade coming in will focus on how to battle an enemy willing to destroy a city with rocket and missile fire in order to conquer it.

ROME — Italy is barring all Russian ships from its ports starting Sunday, as part of expanded EU sanctions announced earlier this month. Ships already in Italian ports must leave immediately “after completing their commercial activity,″ according to a notice sent to port authorities throughout the country.

BERLIN — Peace activists took part Germany’s traditional Easter marches on Saturday, calling for an end to the war in Ukraine but also in at least some cases opposing helping Ukraine defend itself with weaponry.

A Berlin event drew 400 people and one in Hannover 500, the dpa news agency reported, citing police. Marches took place in cities including Munich, Cologne, Leipzig, Stuttgart and Duisburg. Banners included “End the war in Ukraine” and “He who sends weapons reaps war.”

The country’s vice chancellor, Greens politician Robert Habeck, warned demonstrators against sending the wrong message, saying “there will only be peace when Putin stops his war of aggression.” He said in an interview with the Funke media group that it was “clear who the aggressor is who and who are defending themselves in an emergency and whom we must support, also with weapons.”

The locally organized peace marches date back to the days of the Cold War and focus on issues such as disarmament and abolition of nuclear weapons.

KYIV, Ukraine — Kyiv Mayor Vitali Klitschko said that one person died and several more were wounded in the Saturday morning airstrikes on the Darnytski district of the capital, as Russian forces resumed scattered attacks on the capital in western Ukraine.

“Our air defense forces are doing everything they can to protect us, but the enemy is insidious and ruthless,” Klitschko said on the Telegram messaging app.

The attacks, which the Russian Defense Ministry said targeted an armored vehicle plant in the Ukrainian capital, was an explosive reminder to Ukrainians and their Western supporters that the whole country remains under threat despite Russian forces pivot to the east, where a new offensive is feared.

Klitschko urged Ukrainians not to return to Kyiv just yet in televised remarks Saturday, warning that strikes on the capital are likely continue and its suburbs are rigged with explosives. “We’re not ruling out further strikes on the capital,” Klitschko said. “We can’t prohibit, we can only recommend. If you have the opportunity to stay a little bit longer in the cities where it’s safer, do it.”

The mayor of Kyiv added that because of the mines, Kyiv residents are barred from visiting parks and forests in the northeastern areas that border with liberated territories formerly occupied by Russians.

MOSCOW — Russia has barred the UK prime minister and a dozen other top British officials from entering the country in response to British sanctions imposed on Russia over its military operation in Ukraine.

Russia’s Foreign Ministry announced the move that targets Boris Johnson, a number of British ministers and former prime minister Theresa May, on Saturday.

The ministry’s statement cited “unprecedented hostile actions of the British government, expressed, in particular, in the imposition of sanctions against top officials” in Russia.

“The Russophobic course of action of the British authorities, whose main goal is to stir up negative attitude toward our country, curtailing of bilateral ties in almost all areas are detrimental to the well-being and interests of the residents of Britain. Any sanctions attack will inevitably backfire on their initiators and receive a decisive rebuff,” the statement said.

On Friday evening, the ministry announced the expulsion of 18 European Union diplomats from Moscow, in retaliation for the bloc’s declaring 19 diplomats from the Russian mission to the EU and to the European Atomic Energy Community persona non-grata.

The European Union said the expulsions were groundless, and that EU diplomats targeted were working in the framework of the Vienna convention on diplomatic relations.

KYIV, Ukraine — Kyiv Mayor Vitali Klitschko said in an online posting that Kyiv was struck early Saturday in the Darnytskyi district in the eastern part of the capital, saying there were “explosions.”

He said rescuers and paramedics were on the scene and that victims’ details would be released later.

Klitschko urged residents to heed air raid sirens and warned those who have fled the capital not to return for now for their safety.

Thick smoke rising from the site on the eastern side of Kyiv could be seen from parts of downtown near the Dnipro River.

WASHINGTON — Ukraine is sending top officials to Washington for next week’s spring meetings of the International Monetary Fund and the World Bank, where discussion will focus on the Russian invasion and its impact on the global economy.

Coming to the gathering are Ukrainian Prime Minister Denys Shmyhal, Finance Minister Serhiy Marchenko and central bank governor Kyrylo Shevchenko, according to a World Bank official who spoke on condition of anonymity because the visit had not been officially announced.

KYIV, Ukraine — Ukrainian President Volodymyr Zelenskyy said Friday that existing sanctions on Russia are “painful” but not yet enough to stop the Russian military.

Zelenskyy called for “the democratic world” to ban Russian oil. While U.S. lawmakers and U.S. President Joe Biden have enacted such a ban, Europe relies more heavily on Russian energy supplies, and the U.S. has been working to keep India from stepping up its use of Russian energy.

“In general, the democratic world must accept that Russia’s money for energy resources is in fact money for the destruction of democracy,” Zelenskyy said in his nightly video address to his nation.

He also said: “The sooner the democratic world recognizes that the oil embargo against Russia and the complete blockade of its banking sector are necessary steps towards peace, the sooner the war will end.”

TIJUANA, Mexico — A Russian man and Ukrainian woman were married in the Mexican border city of Tijuana after they were unable to travel together to the U.S.

Daria Sakhniuk was allowed to enter the U.S. as a Ukrainian refugee but her partner, Semen Bobrovski, was unable to travel there following Russia’s invasion of Ukraine. They left Ukraine as the war began.

Bobrovski told El Sol de Tijuana that he believed the marriage Thursday would bolster his chances of entering the U.S. with his new wife. The U.S. allows only Russian nationals with family members in the U.S. to enter the country.

“Without it, we won’t be able to cross because, still to the official American government, we are strangers to each other,” he said.

KYIV, Ukraine — Ukrainian President Volodymyr Zelenskyy said he discussed the fate of the besieged port city of Mariupol in a meeting Friday with the country’s military leaders and the heads of its intelligence agencies.

“The details cannot be made public now, but we are doing everything we can to save our people,” Zelenskyy said in his nightly video address to the nation.

Elsewhere in southern Ukraine, he said Russian troops who occupy areas around Kherson and Zaporizhzhia were terrorizing civilians and looking for anyone who had served in the army or the government.

“The occupiers think this will make it easier for them to control this territory. But they are very wrong. They are fooling themselves,” Zelenskyy said.

He added: “The occupiers’ problem is not that they are not accepted by some activists, veterans or journalists. Russia’s problem is that it is not accepted — and never will be accepted -– by the entire Ukrainian people. Russia has lost Ukraine forever.”

Wildfire burning in Durango sends up a large plume of smoke.