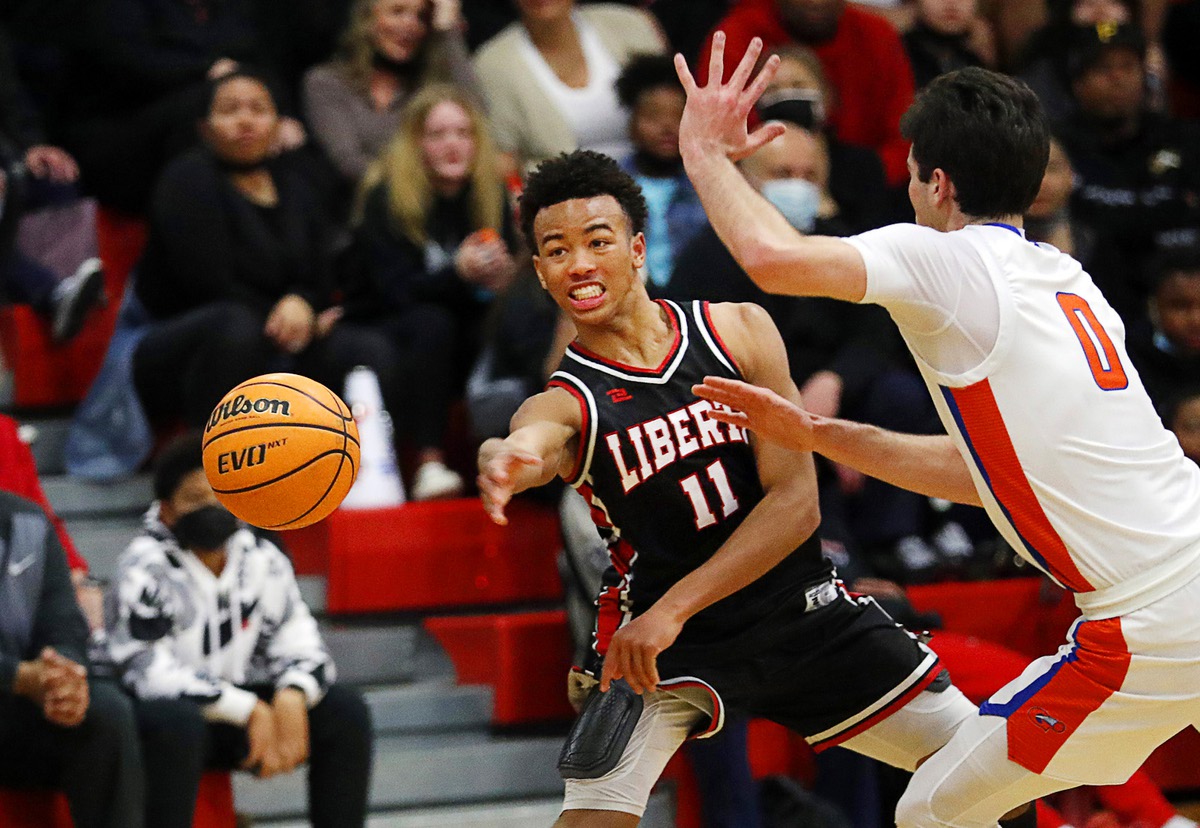 June 15 was a big day for the UNLV basketball program. NCAA rules allow coaches to begin directly contacting rising juniors on that date, so for the first time Kevin Kruger was able to pick up the phone and reach out to his No. 1 recruiting target.

Thomas may still be two years away from graduating, but the Class of 2024 point guard is already UNLV’s top priority on the recruiting trail. Kruger and his staff made that clear by contacting Thomas as early as possible on June 15, and last weekend the entire staff traveled to Arizona to watch Thomas and his Liberty team compete in a summer showcase event.

Thomas is aware of his status atop UNLV’s wish list.

“It’s a great feeling to know that a school wants me so much,” Thomas said. “Knowing that a school loves the way you play and the kind of person you are, it’s just a good feeling.”

UNLV’s infatuation with Thomas runs deep, and with good reason. As a sophomore, the 6-foot-1 floor general averaged 13.3 points, 5.4 assists and 2.0 steals while making 49.4% of his shots from the field and 33.3% from 3-point range. He helped guide Liberty to a state championship and was named to the MaxPreps Sophomore All-America third team.

In terms of style of play, Thomas said he tries to incorporate aspects of Chris Paul’s game into his own, with a dash of Jalen Brunson as well.

“I feel like I can score the ball really well, and I can get my teammates involved,” Thomas said. “I can defend pretty well. And sometimes point guards have to take over games and do whatever it takes to win, whether that’s by defending or getting on your teammates or being a coach on the floor. I think I can control the game that way.”

UNLV was the first school to offer him a scholarship, as former coach T.J. Otzelberger extended an offer back when Thomas was in eighth grade. Houston, Florida, Arizona, LSU and San Francisco have joined the pursuit since then, and UCLA offered him last week.

Thomas was on the UNLV campus last week in an unofficial capacity, and has also taken unofficial visits to Houston and Arizona. He is hopeful that a strong showing this summer will increase his profile and bring in more offers.

For now, it sounds like he is in near-constant communication with UNLV.

“I talk to them every day,” Thomas said. “I’ve built a really great relationship with the coaching staff, especially coach Kruger. Me and him have a really good relationship. And coach [Brandon] Chappell. For the past two years we’ve been building a strong relationship.”

Thomas’ father, Dedan Thomas Sr., was recruited to UNLV by Jerry Tarkanian and was a two-year starter for the Scarlet and Gray. For his career (1991-94), he averaged 6.4 points and 6.5 assists per game.

As a former blue-chip prospect himself and the current director of the West Coast Select AAU team, Thomas Sr. knows the recruiting game. He has tried to use that experience to provide his son with real-talk guidance.

Chief among his list of considerations when making a college decision? Get to know the head coach.

Thomas Sr. also understands that UNLV fans are going to start clamoring for D.J. to choose the hometown school and follow in his father’s footsteps. But the last thing he wants to do is put his thumb on the scale.

If UNLV wants his son, they’re going to have to win him over, fair and square.

“I get it,” Thomas Sr. said. “Being a Runnin’ Rebel, there’s nothing like that. But it’s not me; it’s not my life. I can only tell him the good things about UNLV and be honest with him.

“I understand people wanting him to stay home, because he is a program changer. You get a kid like him, you have a chance to be really good. He’s won on every level now, and he wants to win a college national championship as well. I’m sure he’ll want to be close to his siblings and his mom and myself and his grandparents. It’ll be a tough decision for him, but he’ll have to make that decision. It will be his choice.”

D.J. Thomas appreciates his father’s involvement. He said he’s enjoying the recruiting process so far, and his dad’s advice — and pressure-free approach — has only helped.

“He just told me to enjoy it and soak it all in,” Thomas said. “He’s been through this process, so it makes me feel more comfortable going through it because he can help me make smart decisions. He wants me to make my own decision and create my own path. I’m glad he’s not trying to push me to one school.”

Whichever school ends up landing Thomas will be getting a winner. Liberty coach Kevin Soares said he basically handed the keys to Thomas midway through last season, and despite it being his first year at the varsity level, the youngster took over.

Liberty finished the season 22-4 and defeated Bishop Gorman in overtime to claim the Class 5A state championship in February. In the title game, Thomas scored a team-high 20 points to lead the way.

In addition to his physical abilities, Soares points to Thomas’s intangibles as perhaps his most valuable attribute.

“It’s his floor leadership,” Soares said. “He’s out there and you can tell who’s in charge when he’s on the court. That and his competitiveness. He’s implementing his will, and at the same time he’s making his teammates better. That’s a huge positive for him. College coaches have got to be drooling over that stuff.”

While those colleges continue jockeying for Thomas’s affection, he still has two more years of high school ahead of him. Thomas wants to defend the state championship next year, and he also lists Gatorade State Player of the Year as a personal goal.

As for recruiting? Thomas believes that will take care of itself.

“I want to come back better next year and do whatever it takes to win,” he said. “I just want to win as much as possible. I think that’s what [college] coaches want to see more than anything.”