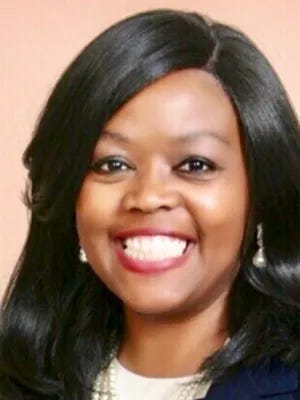 MUNCIE, Ind. — Muncie Democrat Jeannine Lee Lake is making a third bid for a seat in the U.S. House of Representatives.

But this year her race is in a central Indiana district with significantly different boundaries, represented by a different Republican incumbent.

Redistricting since the 2020 election moved Delaware County out of Indiana’s 6th Congressional district and into the 5th district, currently represented by Noblesville Republican Victoria Spartz.

“Instead of (the 6th district’s) 19 counties stretching from Muncie and Randolph County all the way down to Madison, Ind., and Jefferson County,” Lake noted she was now in a district made up of significantly fewer counties, all north of Indianapolis, and including the cities of Muncie, Anderson, Carmel, Fishers, Marion, Noblesville and Kokomo,

“It’s the wealthiest district in the state of Indiana,” she said. “It’s a completely different market. … For me, it’s all new, even though I haven’t moved.”

Her goal this year is to unseat Spartz, a native of Ukraine who was first elected in 2020.

First, however, comes a May 3 Democratic primary race with Matthew Hall, a 28-year U.S. Army veteran who served a year on the Lawrence Common Council.

A message left for Hall at his campaign website did not generate a response.

Lake — who has been a local business owner, and also previously worked as a reporter with The Star Press — acknowledged her new district, like the 6th, appears to be predominantly Republican. However, she said she believed the makeup of the new district offers her a better chance to win election.

For the Muncie Democrat, key issues in this year’s race include affordable health care, dealing with the lingering impact of the pandemic, “still fighting for women’s rights” and addressing infrastructure needs.

Climate change is also a concern, she said.

“Instead of focusing on culture wars, I really hope that the people of this district really take time to just look at the kitchen-table issues that are affecting us on a daily basis.” Lake said.

Should she win her primary race, Lake is ready to shift her focus to Republican Spartz. The Democrat suggested the incumbent has “not served Indiana well.”

STAY INFORMED AND SUPPORT LOCAL JOURNALISM: Subscribe today using the link at the top of this page.

Douglas Walker is a news reporter at The Star Press. Contact him at 765-213-5851 or at dwalker@muncie.gannett.com.