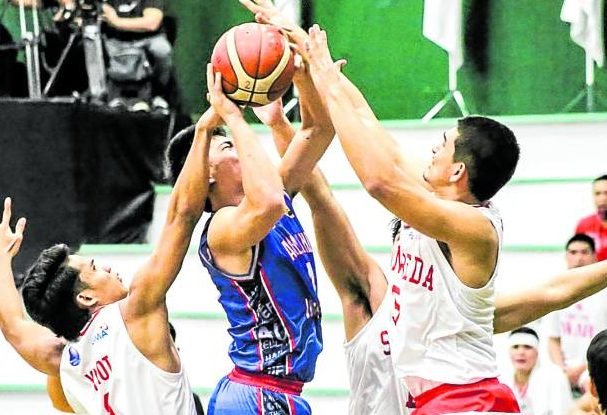 The San Beda defense was unforgiving all game against the Chiefs. —CONTRIBUTED PHOTO

Defending champion Letran and bitter rival San Beda sustained their swashbuckling campaigns in Season 97 of the NCAA men’s basketball tournament on Sunday, carving out contrasting wins to remain unscathed in the elimination round and add more excitement to the anticipation for their titanic clash.

The Knights labored hard against Lyceum before pulling out an 80-77 win over the Pirates where Rhenz Abando shone in the endgame and rescued Letran, even as the Red Lions bludgeoned the Arellano Chiefs, 82-68, at the resumption of action on Easter Sunday.

Letran and San Beda dueled in the title series the last time the tournament was held before the pandemic.

Abando completed a three-point play and connected on a jarring two-handed baseline slam off a Fran Yu feed to lift the Knights to their fifth win in as many games.

James Kwekuteye, meanwhile, tallied 14 points and Gab Cometa added 11 for the Lions, who had to overcome the Chiefs’ strong presence in the shaded area with accurate shooting and methodical playmaking.

San Beda also notched a fifth straight victory as the Chiefs tumbled down to 2-4. Lyceum slid to 1-5.

Leading to that clash, the Knights have a seemingly easier schedule compared to the Lions, who will be facing a murderers’ row of opponents going into the final stretch of their campaign.

After tangling with Perpetual on Wednesday, the Lions will have to close out the elimination round against Mapua and College of St. Benilde before the much-awaited matchup with the Knights, all in a span of six days.

“Well, it’s the schedule. We have no qualms with that,” said Lions coach Boyet Fernandez. “As I’ve said, we are not looking beyond our immediate games. For now, we’ll just be ready against Perpetual.” INQ