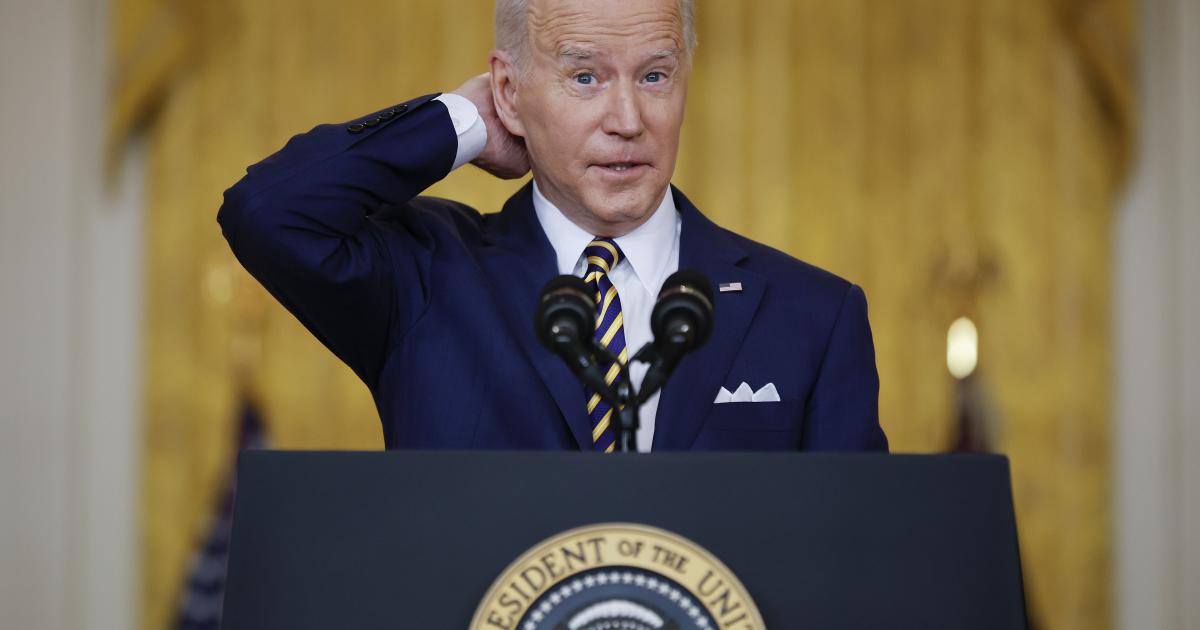 Joe Biden took the podium at Thursday’s post-NATO summit press conference and was subsequently hammered by the press about his administration’s devastating track record that has triggered crisis after crisis.

If he wasn’t throwing the supreme court under the bus over Roe V Wade, he was just flat out lying about his failing economy and making the usual fool of himself on the world stage.

It’s a wonder they allow this man near a microphone anymore.

TRENDING: Cruel and Unusual Punishment: DOJ Instructs VA to Suspend All Benefits of January 6th Prisoner Held in DC Gulag – This is What Happens When “Vindictive Leftists get in Charge”

Facing questions about out-of-control gas prices that have skyrocketed since he took office, Biden declared that Americans should expect to pay elevated prices at the pump until the ongoing war between Russia and Ukraine is over.

In other words, there is little to no end to the gas crisis in sight.

“How long is it fair to expect American drivers and drivers around the world to pay a premium for this war?” a New York Times reporter asked Biden.

“As long as it takes,” Biden responded. “So that Russia cannot in fact defeat Ukraine and move beyond Ukraine.”

As he again blamed the skyrocketing price of gas on Putin, Biden added that “this is a critical, critical position for the world” in an effort to add some urgency.

REPORTER: “How long is it fair to expect American drivers…to pay that premium for this war?”

BIDEN: “As long as it takes.” pic.twitter.com/ewlUvFyoZK

Americans have been hearing the same tired lines out of the Biden Administration for months, always claiming that we are in a critical position and that Russia is an existential threat to democracy as we know it – as the DC Swamp literally takes a wrecking ball to our Constitutional republic. We have sat by and watched the corrupt military-industrial complex funnel tens of billions into the notoriously corrupt government of Ukraine, with little to no results to show for it. And now, Biden, whose family has profited in Ukraine for years, is telling Americans to suck it up and pay up at the pump indefinitely in order to prop up the globalist empire’s proxy war effort.

Meanwhile, Biden and the rest of the talking head experts are shamelessly gaslighting the public by claiming every issue stateside is due, almost exclusively, to Putin and Russia’s actions. It’s a sick joke.

Nevertheless, Biden hammered this tired lie home on Thursday, claiming, yet again, that the “reason why gas prices are up is because of Russia. Russia, Russia, Russia” (not a typo). It’s not just gas, either. Biden also blamed the food crisis on Putin.

“The reason the food crisis exists is because of Russia,” Biden added.

Pay no mind to the hundreds of incidents that have happened over the past few months in which food processing plants and warehouses have mysteriously shut down or have been destroyed in some way (fire, plane crash, etc).

It’s all Putin’s fault, and it’s your job as an American to pay for it – indefinitely. Don’t worry about the big guy and his 10%, it’s just the standard vig.

That’s the Build Back Better agenda.