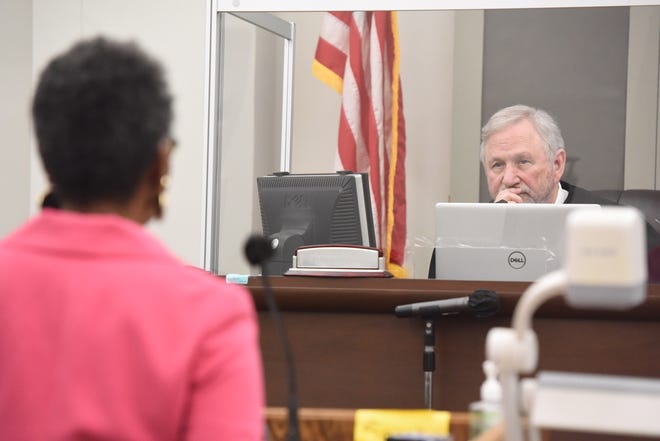 A special judge overseeing a lawsuit between Jackson Mayor Chokwe Antar Lumumba and the City Council over a garbage contract heard from attorneys Friday about whether he should rule on an issue raised about the mayor’s veto power.

Jess Dickinson said to make a decision, a main consideration will be whether a legislative body such as the council voting no on a contract is the same as adopting an ordinance. He said that issue hasn’t been decided in Mississippi.

“It’s going to get decided sooner or later, for the people of Jackson,” Dickinson said toward the end of the hearing in Hinds County Chancery Court.

A decision is expected in the coming weeks.

How did we get here?

Dickinson ruled in the case April 1, the day Jackson’s former emergency garbage collection contract expired. In the ruling, he wrote an enforceable contract negotiated through the competitive bidding process or a declared emergency needs to be approved by the council.

But in a footnote, Dickinson posed a “possible exception,” for an emergency contract to be valid without a council vote.

Lumumba said last week the judge’s decision enabled him to use the veto power on a ratified garbage contract that a majority of councilmembers voted down twice. After the council meeting, he said the contract is valid and Richard’s would begin picking up trash, which it did.

The next day, Dickinson vacated his initial order and updated it by taking out the footnote, saying the issue raised in it wasn’t before the court.

City Council attorneys: Mayor’s use of veto could give ‘an authority no mayor has had before’

At the Friday hearing, Attorney Deshun Martin said the issue at hand is the extension of executive power. He cited the Mississippi Constitution and what it says about separation of powers between the branches of government, including how one branch can’t exercise powers of another branch.

Martin asked: If Lumumba claims he can veto a no-vote by the council, could he veto any city contract without a majority vote?

“This could give the mayor an authority no mayor has had before,” Martin said.

Even though the mayor’s veto is included in the state Constitution, Martin said there are principles at stake. He said the legislative branch has its own powers, including the approval of contracts, and in a democracy majority vote rules.

Attorney John Scanlon, who was hired by the council last week to work with Martin, argued the council’s voting no on the emergency contract is not the same as approving an ordinance.

He argued that the word “adopt” implies positive action, which did not happen with the Richard’s contract.

Attorneys for mayor, Richard’s Disposal: These issues shouldn’t be before the court

Jessica Ayers and Felecia Perkins, who represent Lumumba, argue there are no pending issues for the court to consider because the judge already made a final ruling.

Ayers said the council and Waste Management filed motions after the judge’s initial ruling on March 31, which is not valid under court procedural law.

Those motions were filed the morning and afternoon of April 1 and Dickinson’s revised ruling came the evening of that day. She said emails the judge sent to attorneys indicated he reviewed those filings before issuing his ruling.

John Walker, who represents Richard’s Disposal, agreed with Lumumba’s position the motions were filed too late. Walker filed a motion to strike those actions.