It’s Easy to Buy a Snake in Texas. Maybe Too Easy. – Texas Monthly 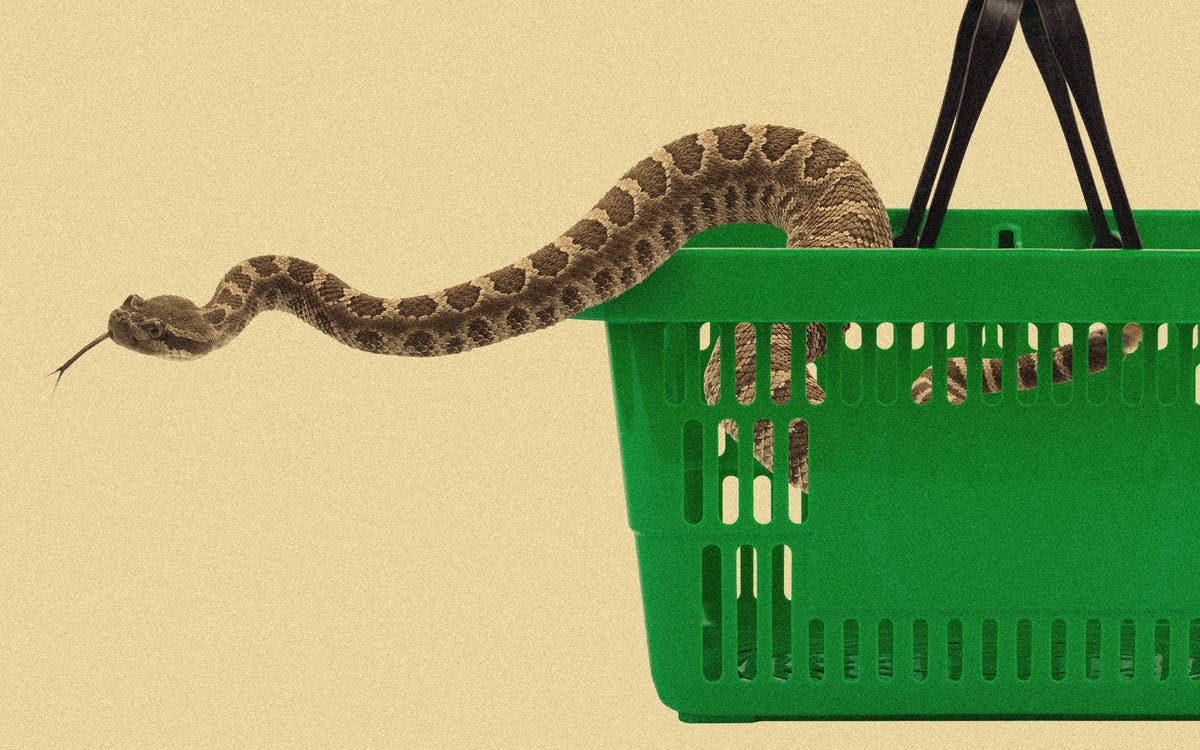 How do you put a price on a sunset? Or a warm summer breeze ruffling your hair? A tiny, glittering hummingbird flitting from flower to flower like a living jewel? Some things in life seem to transcend the insensate forces of the market economy. They belong to something much greater and more ineffable—to nature and to the universe, in all its huge and terrifying complexity. What I’m saying is, I had no idea a rattlesnake costs $75.

I made this discovery at the end of April, in the Premier Athletic Complex in Leander. The facility is primarily used for rec basketball leagues and youth volleyball camps, but that weekend it was hosting the HERPS Austin Exotic Reptile and Pet Show. The event’s Facebook page promised “thousands of reptiles, amphibians, inverts, feeders, small mammals, supplies, and more,” including venomous snakes and large constrictors. There would also be snacks. “This show is HOT!” the event description crowed.

The event was indeed packed. Outside, cars with lizard bumper stickers crept around the overflowing parking lot looking for a spot. Inside, hundreds of buyers and voyeurs squeaked along the shiny maple courts, perusing the offerings that had been laid out on folding tables. Small snakes ($150), geckos ($150), scorpions ($45), tree frogs ($65), and tarantulas ($35) peered out from beneath the lids of small plastic takeout containers. Larger tanks held baby caimans ($300), water monitors ($250), and hedgehogs ($150). None of the prices seemed right to me. Not so much because of the amounts themselves, but because it seemed wrong that the same currency I use to pay for my groceries and streaming services could also be used to purchase a scorpion.

The expo felt like a cross between a petting zoo and a sample sale. At one booth, a vendor lifted a gigantic constrictor into the arms of a mulleted man, whose knees buckled slightly under its weight. “She’s sixty pounds, but a heavy sixty,” the vendor explained. At another, each half of a young couple took turns cradling their newborn while the other handled a series of leathery chuckwallas. They weren’t sure whether they should get older lizards that they could start breeding right away or younger lizards with whom they could form a deeper bond. Both the older and younger chuckwallas seemed indifferent to them. I watched the couple deliberate for several moments before I realized my face was inches from a large, bored-looking chameleon. It was balancing on a lamp, one of its eyes trained on me while the other swiveled around, scanning the room. I stepped back to give it space. There was an actual petting zoo near the entrance, too—$5 to pet chickens and small goats—though at first glance I had assumed it was a concession stand for the constrictors.

Besides the critters themselves, vendors offered a whole constellation of reptile-adjacent goods. The Rodent Shoppe sold frozen rats, mice, quail, chicks, and rabbits as feed for carnivorous pets. Other vendors offered tanks, fake rocks, python hooks, and boxes full of live crickets. One booth advertised, simply, “Rodent hammocks!” Then there was the merch: decor and clothing that allow you to loudly and proudly announce to the world that you are a reptile person. One stall sold signs that said “Geckos > People.” Another sold T-shirts that said “My Snake and I Talk S— About You” and “Whoever Said Money Can’t Buy Happiness Hasn’t Been to a Reptile Show!” For the younger guests, there was a face-painting station.

“This is a great turnout,” said Shawn Gray, the founder of the HERPS expos. Gray was decked out in purple and neon green, the official colors of HERPS. He had spent the morning patrolling the front of the building on a hover-board, answering questions and helping visitors find parking. He and his wife, Lori Gibson, started the expos in 2015, after years of breeding leopard geckos and attending what they considered to be subpar reptile shows. According to Gray, the other shows didn’t do any promo or vet their vendors. It wasn’t uncommon for Gray and Gibson to set up their booth next to breeders selling animals that were half dead. The duo started heavily promoting their expos on social media, and the number of shows multiplied faster than a feisty pair of bearded dragons. The first year, they held three expos. Now they do almost thirty a year, mostly around Texas, but also in Colorado, Louisiana, and Oklahoma.

Vendors told me that thanks to social media and online sellers, reptile ownership has grown from an eccentric hobby to a mainstream interest. “It used to be the tattooed weirdos, and it’s really not anymore. Kids love it,” said Traci Duncan, a snake and T-shirt vendor who had brought along her pet coatimundi, a South American cousin of the raccoon. “Not all the parents are into it,” she admitted. “I tell people who are afraid of snakes: ‘You just haven’t met the right one yet.’ ”

For some buyers, the right snake is one chock-full of hemotoxins.

“People look at the seventy-five-dollar rattlesnakes and go, ‘That’s cheap!’ ” said Rachelle McCandless, an assistant vendor at E² Exotics, which offered a selection of venomous snakes, as well as leopard geckos, chuckwallas, and framed butterflies. “I’m like, ‘Yep, and it’s a fifty-thousand-dollar hospital bill if you mess up and get bit.’ ”

And a debilitatingly expensive hospital bill is not the worst-case scenario. The weekend after HERPS, an experienced rattlesnake handler died after a rattlesnake bit him on the shoulder while he was performing at the annual Rattlesnake Roundup in Freer, near Corpus Christi.

Texas laws are fairly lax about venomous snakes and large constrictors. All you need to own one is a $20 Controlled Exotic Snakes Permit from Texas Parks and Wildlife. You can obtain the permit after you purchase the animal, meaning anyone without a permit can walk into a pet store and buy a venomous snake. Still, McCandless explained that she wasn’t about to sell a wildly affordable rattler to just anyone. “You need very secure locking enclosures. You need tools, like hooks and tongs, because you never want to put your hands on a venomous snake.” If an interested buyer doesn’t already know this and asks McCandless what they need to bring their new hemotoxic friend home, she tells them they need “a lot more information.”

One buyer who did make the cut at E² Exotics was Zane Dortch, 22, who bought a prairie rattlesnake with his girlfriend, Catherine. “I’m trying to collect all our [snake] species in Texas, and I’m going to start a YouTube channel and start showing ’em off,” Dortch explained. He already has rat snakes, garden snakes, three copperheads, and an Eastern black-tailed rattlesnake, but he still needs to add about ten more species before he can complete his collection and start his channel. “The last rattlesnake we’ll be getting is the Mojave,” he said, explaining that it’s a species with both neurotoxic and hemotoxic venom. “They got a cocktail on that one.”

Venomous snakes aside, many HERPS attendees made the case that reptiles can be easy, beginner pets because they’re hypoallergenic, they don’t need to be taken out multiple times a day, and they don’t need to be fed as often as cats or dogs. In front of a row of tarantulas, I met Shelby and Jenny, a couple who were in the market for a bearded dragon. They already owned a ball python, a leopard gecko, a scorpion, and a tarantula. They said they liked the convenience of reptiles. “It’s easier if you’re traveling, because you only have to feed them once a week,” Shelby said.

The idea that an exotic reptile is a convenient alternative to, say, a Labrador, is one animal rights groups have been pushing back against. “People will buy one on a whim and then they’ll quickly become overwhelmed by the level of care that’s actually required,” said Debbie Leahy, a senior strategist for captive wildlife protection for the Humane Society of the United States. The Humane Society opposes keeping wild animals as pets, she noted. “And that includes reptiles.”

Daphna Nachminovitch, the senior vice president of PETA’s Cruelty Investigations Department, said that while sellers often advertise reptiles as being easy to care for, “they’re actually quite complex animals.” For an animal to just survive, she explained, owners need to know its ideal humidity and temperature levels, what kind of heat lamps or rocks to get, and how to properly feed it.

Once the novelty of a new reptile wears off, Leahy said, many owners realize they’re not equipped to care for it. Some try to off-load their exotic pets onto local animal shelters, which may or may not have the necessary knowledge and material to care for those specific creatures. Other owners simply release their critters into the wild, where, as Leahy explained, “they’re either going to perish, or they’re going to become established and threaten native ecosystems.” In any case, the prospects for a reptile that gets purchased by an inexperienced owner are not bright.

Shawn Gray is familiar with the arguments against expos like his. “There are a lot of animal rights groups going after us,” he acknowledged. “But they don’t understand.” The shows, he said, provide a chance for visitors to familiarize themselves with creatures that are often demonized in popular culture—and to develop a passion for animals. “A lot of these kids running around, they’re going to be conservationists and biologists,” Gray speculated. That theory didn’t hold much water with Leahy, who pointed out: “Kids are fascinated by dinosaurs, but no kid has ever seen one.”

As I roamed through the rows of scaly creatures, I wondered whether I had it in me to become a reptile or bug person. It felt bizarre that for less money than I’d recently paid for a pair of jeans, I could leave this suburban gym with an exotic animal. At one stall, I let a tarantula scuttle across my palm. At another, a woman draped her pet ball python, Avery, over my shoulders. It was fine. I felt no fear or aversion. Nor did I feel any emotional tug toward those animals, as I have with every dog I’ve ever met (or even just seen in a picture). It was difficult for me to understand the draw of a pet you have to handle so delicately, when my own favorite game to play with my dog is one in which I chase her, tickle her, and then bury my face in her soft belly and hope our two bodies will eventually fuse into one.

I left with only two framed butterflies ($20 each). But for the next couple of weeks, whenever I found myself trapped in a conversational lull, I’d ask: “How much would you guess a rattlesnake costs?” You can’t put a price on a good conversation starter.