How football coaches reacted to MHSAA adding a seventh classification 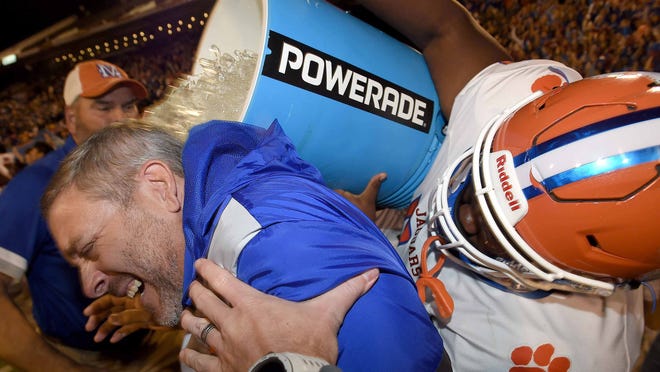 “I think the purpose of classification is to keep schools in a fairly even playing field as far as numbers,” Kuhn said. “The discrepancy between the top and the bottom in 6A just became too much.”

MISSISSIPPI STATE FOOTBALL RECRUITING:Malik Ellis wants to reach the NFL. Mississippi State football already has given him a blueprint.

The Chargers are the second smallest school in Class 6A with 1,047 students. Grenada was included in the Class 6A-Region 2 during the last MHSAA reclassification with Tupelo (1,907 students), Madison Central (1,628 students) and Clinton (1,565 students) among others.

The Chargers started the season 0-4 in non-region play before finishing the season 1-6 in regional games. Kuhn doesn’t blame his team’s record on the discrepancy in enrollments between teams — Grenada’s regional schedule was a gauntlet regardless of school size, including the Class 6A state champions Madison Central. However, depth issues become glaring for smaller programs later in the year.

“The division we’re in is really tough to begin with,” Kuhn said. “There are some really good football teams, but then you factor in the number of size differential in the schools. We knew going in that we kind of had our backs against the wall.

MHSAA executive director Rickey Neaves believes the additional classification will alleviate the gaps in enrollment in Class 5A and 6A. Class 6A will move from 32 teams to 24 schools in the next reclassification with the 24 programs with the highest enrollments moving to Class 7A.

The next 24 schools will be filled into Class 6A and 5A, respectively. Classifications 4A through 2A will include the next 40 schools with the highest enrollments. All remaining schools will compete in Class 1A.

Laurel coach Ryan Earnest was behind adding the seventh classification since the MHSAA executive board started discussing the idea in February. The Tornadoes had the smallest enrollment in Class 5A in the latest reclassification and Laurel (10-4) advanced to the state semifinals last season. However, he believes that problems in Class 6A needed to be solved.

“That puts people at a competitive disadvantage in some situations,” Earnest said. “It wasn’t a big issue for us, but I can see where it can be an issue with other schools.”

OLE MISS FOOTBALL RECRUITING:Why Lane Kiffin has impressed Dante Dowdell and what Derrick Henry has to do with recruiting

The additional opportunity for a program to claim a state championship was a huge selling point for Pearl football coach Justin Hunter. The Pirates had the 28th highest enrollment in the 2020 MHSAA reclassification. The program is in position to remain in Class 6A or jump to Class 7A based off the enrollment numbers MHSAA collects next fall.

However, Hunter will be happy to see a seventh team win a state championship in 2023.

“Go back to 2017 when we were fortunate enough to win it, you’ve got old men who were crying on the field,” Hunter said. “Absolutely crazy because they didn’t think they would ever see the Pirates win a state championship in football. We won and we’ve got grown men that are huge people in the community, that everybody knows, just bawling.

“Why would you not add one of those?”