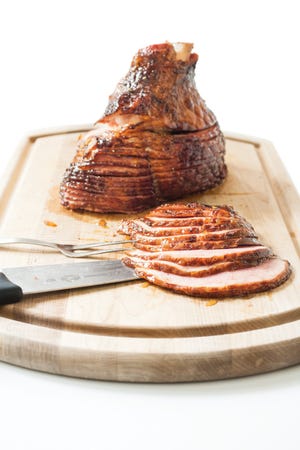 Easter is prime time for ham and every year questions crop up about it. What’s the difference between the butt and shank portion? How much should I buy? Do you glaze the ham?

Relax. We are here to help.

One thing is for sure is that if your plan is to have ham for Easter the price is right.

Given all the grocery price hikes consumers are being hammered with, there are plenty of bargains are area grocery stores on hams. And there appears to be plenty of them. And that makes buying a ham a good value.

A glance at sales flyers and store websites and hams are on sales starting at 79 cents a pound depending on which portion you buy and if it’s spiral-sliced. There are, of course, limits on how many you can buy. Buy two if you can because leftover ham has many uses: quiche, salads, sandwiches and soups. But even if you scoop one, a ham at 79 cents a pound is a great value for the price.

Here are some answers to frequently asked questions about ham along with one of our favorite recipes from the Detroit Free Press, part of the USA TODAY Network, recipe archives.

Should I buy a whole or a half ham? How much ham will I need per person?

A whole ham typically weighs more than 10 pounds. That’s a large hunk to wrestle with in a roasting pan, which is why you’ll find so many half hams (whole hams cut in half). But if you’re feeding a lot of people, you might consider it. With a bone-in ham, plan on ⅓ to ½ pound of meat per person (or 2 to 3 servings per pound), or more if you want leftovers. For a boneless ham, figure about ¼ pound per person, or more for leftovers.

Easter brunch: This 8-ingredient quiche Lorraine is a must-try

Butt or shank portion of ham?

The answer is purely a matter of preference, though the taste and cost are factors to consider. A ham labeled “butt end” comes from the upper thigh, closer to the hip. It typically costs a bit more and is fattier and meatier. Carving can be an issue with the butt end because of its irregularly shaped aitch bone. A ham labeled “shank end” is larger so you’ll get more servings out of it. It’s easier to carve, has less fat and costs less.

Personally, I prefer the flavor of the shank end, which isn’t as fatty.

A boneless ham costs more than shank and butt portions, but there’s also less waste and you will get more servings. Boneless will have a binder that holds it together in one solid piece.

As for flavor, many cooks and meat experts would agree that choosing a ham with the bone in provides more flavor. And you can use the leftover bone to make soup.

Spiral-sliced hams are sliced in a spiral fashion around the bone, making serving easy. But you need to watch them closely because they can dry out when reheated. Allow 10 to 18 minutes per pound reheating time for a whole or half spiral-sliced ham. I’ve had good luck reheating spiral sliced hams cut side down in the roasting pan.

How long should I cook it?

Ham labeled fully cooked needs a gentle rewarming in the oven. Most package directions recommend heating ham in a 325-degree oven. Set it out at room temperature for about an hour before placing in the oven. This way, it won’t take as long to reach the recommended internal temperature. The U.S. Department of Agriculture says the center of the ham needs to reach 140 degrees to fully reheat. Figure 18 to 24 minutes per pound for half, bone-in hams and 10 to 15 minutes for boneless. Allow 15 to 18 minutes per pound when reheating a whole ham.

Glazes often contain a lot of sugar, which can burn, so many recipes call for adding them toward the end of cooking. But I think they keep the ham moist. You can apply some at the beginning of cooking (make sure the ham is covered with foil) and again after it has reached the 135-degree mark.

We prefer a tapered shank ham, but a rounded sirloin ham will work in this recipe. You can bypass the 1½-hour soaking time, but the heating time will increase to 18 to 20 minutes per pound for a cold ham. If you skip the soaking step, the ham will be a bit less juicy.

Remove ham from oven and increase oven temperature to 350 degrees. Cut open oven bag and roll back sides to expose ham. Brush ham with one-third of glaze and return to oven until glaze becomes sticky, about 10 minutes (if glaze is too thick to brush, return to heat to loosen).

Remove ham from oven, transfer to carving board and brush entire ham with one-third of glaze. Tent ham loosely with aluminum foil and let rest for 15 minutes. While ham rests, add 4 to 6 tablespoons ham juices to remaining one-third of glaze and cook over medium heat until thick but fluid sauce forms. Carve and serve ham, passing sauce separately.

Tested by Susan Selasky for the Free Press Test Kitchen.