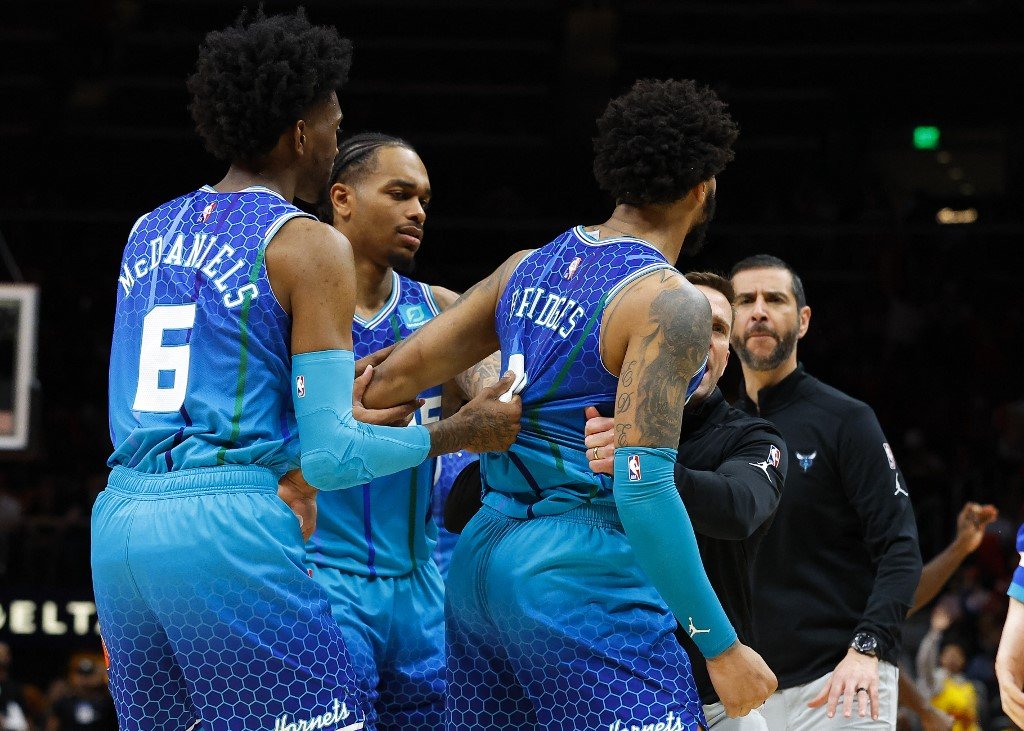 Miles Bridges #0 of the Charlotte Hornets is restrained after a foul is called and he is ejected during the second half against the Atlanta Hawks at State Farm Arena on April 13, 2022 in Atlanta, Georgia. Todd Kirkland/Getty Images/AFP

The NBA fined Charlotte forward Miles Bridges $50,000 on Thursday for throwing his mouthpiece into the crowd after he was tossed from the Hornets’ play-in loss to the Hawks in Atlanta.

Bridges had been called for goaltending in the fourth quarter of the Wednesday game, and after complaining to referee James Williams, he received two technical fouls and was ejected from the game.

As he departed the court, a Hawks fan yelled at him, and Bridges turned and threw his mouthpiece — which hit a young woman who was standing nearby.

“I was upset about a call, a couple of calls really,” Bridges said after the game Wednesday. “I let my temper get the best of me. That was definitely the wrong thing to do.

“I was aiming for the guy that was screaming at me and it hit a little girl… I take full responsibility and will take any consequences the NBA gives me.”

The Charlotte Observer reported that the fan who was hit was a 16-year-old girl, who declined to be interviewed by the newspaper.

Bridges said he hoped to be able to get in touch with her to make amends.

In other disciplinary action on Thursday, the NBA fined Minnesota guard Patrick Beverley $30,000 for “inappropriate statements during a media interview and on social media, including the egregious use of profanity” following the Timberwolves’ play-in victory over the Los Angeles Clippers on Tuesday.