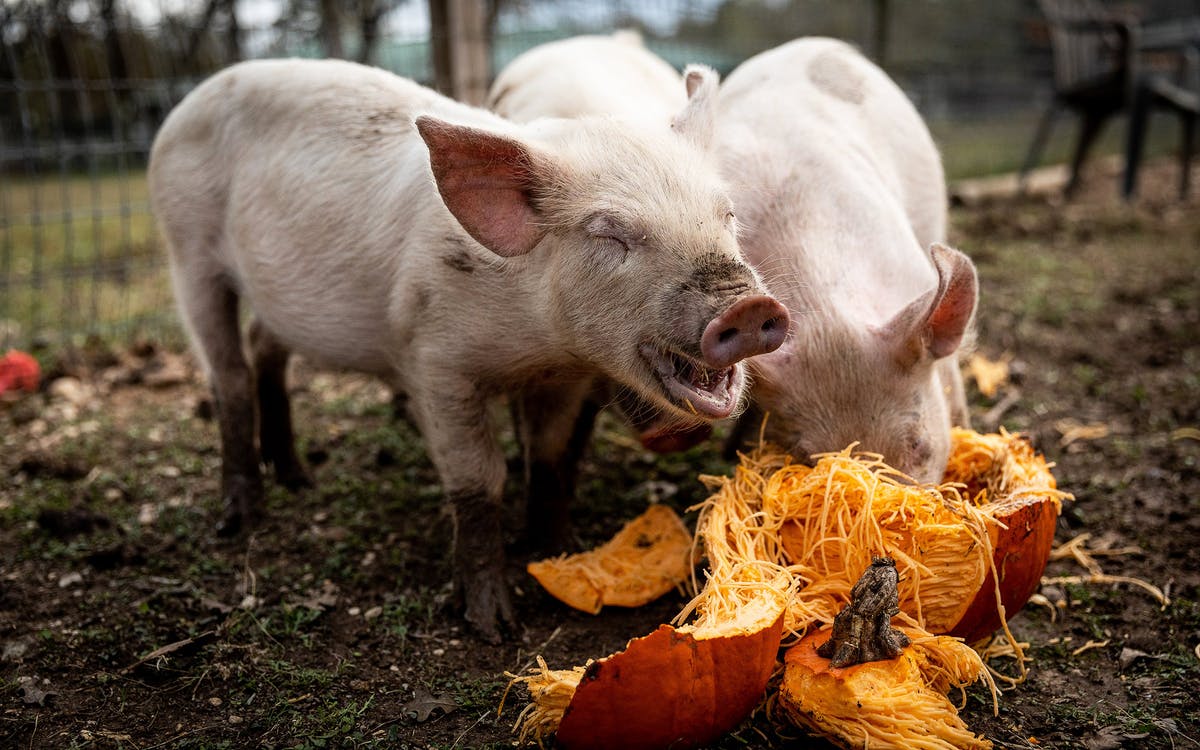 A rooster’s piercing crow urges a volunteer in overalls and rubber boots to hurry up and scatter cobs of corn. Flocks of chickens frolic through sprinklers like kids on a summer day. Here at the Austin Farm Sanctuary, in the tiny Bastrop County town of Paige, animals are living the good life. Gated areas are spread out over the sprawling, forty-acre property. Several pigs housed to the east snooze in a muddy patch under the sun, while cattle graze on fresh grass by a pond to the west. I’m struck by how different the experience is from visiting a zoo. Here, it smells like animals and dirt. The enclosures are roomy, and none of the residents seem bored or frustrated (pacing is a common sign of this at zoos). In one gated section, I watch a dozen goats climb atop wooden structures and happily headbutt yellow balls.

A sanctuary is a place where animals are never bred or sold, where they receive quality care and either get rehabilitated and rehomed or stay for the rest of their days. If you’re looking to plan a family day trip or a date, or if you just want to hang out with some goats, visiting a sanctuary offers an up-close-and-personal experience. In Texas, you have dozens of options to choose from. Since this is a lightly regulated industry, it’s important to verify that a sanctuary is a 501(c)3 nonprofit organization or has appropriate accreditation, such as that granted by the American Sanctuary Association or the Association of Zoos and Aquariums. If the sanctuary keeps exotic animals, look for it to have a USDA license. It’s usually a positive sign when a facility invites guests to come see what it does, but safety protocols should be in place.

Whether you end up at an expansive property that’s been around for decades or a newly opened small farm, whether a sanctuary allows only observation or offers an opportunity to touch or feed its denizens, as you interact with the animals you might hear their stories and learn how much they’ve overcome. Below, we’ve rounded up seven of our favorite sanctuaries from across the state.

On their three-acre property about an hour north of Fort Worth, Jennifer and Josue Arizpe—a hairdresser and a telecommunications tower climber—have created a safe place for more than 125 abused and neglected farm animals. Their menagerie includes rabbits, pigs, turkeys, ducks, horses, goats, and cows. Several of the critters are vision-impaired, including Raven, the blind calf, and Vic, the blind goat. It all started when Jennifer, who grew up in the Netherlands riding horses, heard about a rescue horse that needed help. Three and a half years later, the couple also keeps chicken coops and a new bunny barn.

The Arizpes partner with local shops and restaurants to host a wide range of events, including an Easter candy hunt, vegan cookouts, and summer camps for kids. They also offer private tours and volunteer opportunities on Sundays. Students can earn volunteer hours by helping out. “I still do hair and have my own salon in Fort Worth where all the products are cruelty-free. But I prefer to be outside cleaning up chicken poop,” Jennifer says.

Two dogs bearing scars of the lives they’ve left behind—one a tripod missing a front leg, the other with a poorly healed wound around its left eye—prance about with wagging tails during my visit to Austin Farm Sanctuary, about an hour southeast of the city. Since founding their nonprofit in 2017, husband and wife team Chris and Angela Fuller-Wigg have amassed nine “big pigs,” almost a dozen “little pigs,” and 25 goats, as well as sheep, chickens, roosters, cows, cats, and Wiz the tortoise, who loves scratches on his shell so much he dances upon receiving them.

Take advantage of the BYOV (Bring Your Own Veggies) policy: visitors are encouraged to bring lettuce, carrots, cabbage, and fruit to feed the animals. You can take a scheduled tour of Austin Farm Sanctuary any day of the week, or sign up to volunteer with cleaning, watering, and feeding. The majority of the residents were either surrendered from the meat, dairy, and egg industries or taken in as strays. Yet the animals—like Buddy the blind goat, who basks in the sunshine—seem unburdened by their past.

This 172-acre ranch was once a dairy farm, but is now home to about one thousand donkeys, making it the largest donkey rescue in the nation. The abundant land provides plenty of pasture for grazing, as well as space for standing troughs of hay, and numerous stables and lean-tos to offer shelter. A nonprofit that operates nationwide from its Texas headquarters, Peaceful Valley has 24 sanctuaries and 26 adoption centers; it’s saved more than eight thousand abused, neglected, and abandoned domestic donkeys and wild burros. Founders Mark and Amy Meyers bought their first donkey as a companion for their horse, then began hearing about other donkeys in unsafe situations. Now they manage fifty employees in four states. In San Angelo alone, up to one hundred volunteers stop by each month to clean, feed, groom, and socialize the donkeys. The Meyerses describe the species as smart, loyal, affectionate, and always ready to make you laugh. “I care about them because nobody else does,” Mark says. Scheduled tours are available Mondays through Saturdays.

Renee King-Sonnen was a meat-eater when she married a fourth-generation cattle rancher. For years, she watched a red trailer packed with cattle drive off their property, merge onto the highway, and disappear. When her husband, Tommy, roped her into bottle-feeding an orphaned calf, Renee got attached to the animal and named it Rowdy Girl. This relationship gave her the idea to raise the $36,000 needed to buy the herd from her husband so the animals wouldn’t be sent to slaughter. Now she and Tommy are vegan activists who run their sanctuary on 147 acres in Waelder, an hour east of San Antonio. Renee sings and plays guitar to the cows, five-hundred-pound hogs, goats, chickens, roosters, horses, ducks, dogs, cats, sheep, and donkeys. The couple sees their conversion from beef cattle ranchers to nonprofit sanctuary operators as the utmost expression of Texan independence. They’ve pioneered a first-of-its-kind Rancher Advocacy Program, which helps motivate ranchers to consider plant-based farming by focusing on financially viable partnerships between industries. Rowdy Girl also works regularly with Future Farmers of America and 4-H students. Public and private tours are available, and volunteer help is welcome. As for the red trailer, it’s still on the property, unused and rusting.

This oasis an hour north of Houston is the state’s only USDA-licensed wolf sanctuary, confirming its ability to properly source and handle food for carnivores. Open for twenty years, Saint Francis Wolf Sanctuary currently protects 16 wolves, which are mostly paired up in caged enclosures of at least an acre. A planned expansion will increase the capacity to 36.

The facility provides a permanent home for rescued wolves and hybrid wolfdogs, most of which were once privately owned and therefore cannot be released into the wild. “When you realize you have sentient beings who are dependent on you,” says executive director Nicole Rogers, “it becomes a mission in life to be there for them.”

There are plenty of seating areas on the grounds for watching the wolves, and although the sanctuary is open for tours and Howl Nights—a unique overnight experience that includes sitting around the campfire and listening to the pack—no direct contact with the animals is allowed. Not even staff members touch the wolves. “Our goal is to ultimately work ourselves out of existence. Wolves shouldn’t be living in captivity,” Rogers says.

This nonprofit functions a bit like a hospital for wildlife, filling a gap in the rural Panhandle and South Plains region. There’s a bright red barn and an impressive outdoor aviary, coupled with an outdoor amphitheater; a small drop-off building is open 24 hours a day to accept injured creatures. South Plains Wildlife Rehabilitation Center’s mission is twofold: to rehabilitate wounded, abandoned, or displaced wildlife and return it to its natural habitat, and to provide environmental education. Toward the latter aim, the group welcomes more than one thousand visitors during its annual fall open house, where it offers crafts for kids, speakers on conservation, live music, and the chance to marvel at the animals. South Plains Wildlife offers more than 110 events and tours a year, including a volunteer program for adults. The center offers internships for college credit, including lessons on triage and medication protocol. There’s also a Junior Volunteer program, in which twelve- to seventeen-year-olds learn how to appreciate and conserve native wildlife.

This El Paso nonprofit holds state and federal licenses to rescue migratory birds, waterfowl, songbirds, shore birds, and more. Husband-and-wife founders Julie Ito Morales and Jaime Morales, teachers by trade, opened Stick House Sanctuary twelve years ago. (The name is an homage to the idea that many wild animals build homes out of sticks.) Stick House also rehabilitates mammals such as foxes, squirrels, voles, chipmunks, and mice, and has taken in roosters confiscated from cockfighting rings. The Moraleses aim to keep interaction with wildlife at a minimum in order to allow for rerelease, if possible.

Asked to name her favorite creature at the sanctuary, Julie, who became a vegan after growing up in the hunting and farming cultures of Wisconsin and Iowa, says she can’t pick one. “On any given day I am excited about spending time with twenty-seven bottle baby skunks, or six raven hatchlings, eighteen ducklings, or herons who really want to poke us in the eye,” she says. Stick House hosts educational events and takes presentations to nearby schools. Volunteers help manage the vegetable garden, which allows the sanctuary to be self-sustaining.