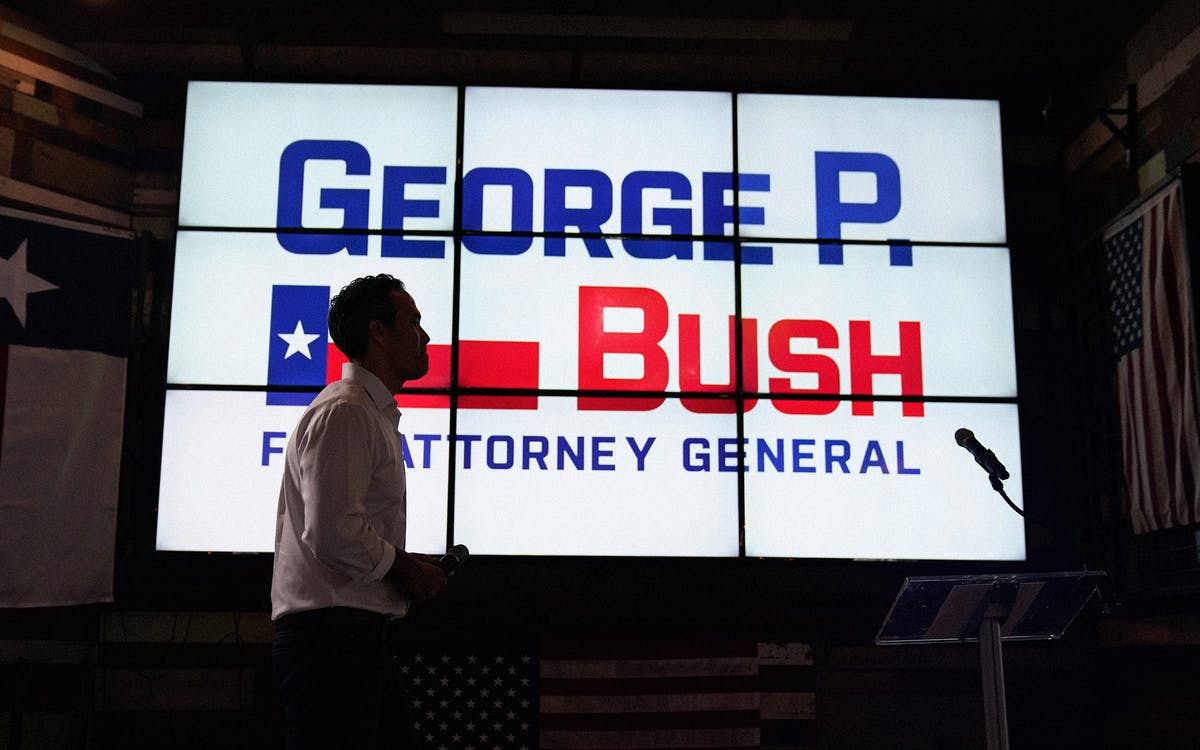 And so this is how the Bush dynasty ends: not with a bang but with a whimper. Just 37 minutes after polls closed in most of Texas, the Republican primary runoff for Texas attorney general was called for incumbent Ken Paxton. At press time, he was leading Bush two to one—in the parlance of George W., a thumpin’. It’s an ignominious end to a half-century run by the House of Bush. Once the great handsome hope of the Bush brand, the young man they half-jokingly called 47, P. has been thoroughly defeated by a man who he claims will soon be “perp-walked into jail for the second time.” This family of senators, governors, and presidents must settle, in its final act, for the office of land commissioner, a position P. once compared to “dogcatcher”—and only a week after George W. Bush inadvertently admitted that his Iraq War was “unjustified and brutal.” Donald J. Trump and Ken Paxton made good on their promises to end the Bush dynasty.

Let’s give P. Bush this: he had a nigh-impossible task. The 46-year-old land commissioner had to beat a statewide incumbent in a runoff, a feat that has been accomplished just once in the last decade. And he had to do so by somehow convincing the base of the radicalized Texas GOP that he, a Bush through and through, was an authentic Trump-loving MAGA conservative even though Trump had endorsed his opponent, Paxton, and repeatedly made it known that he wanted to see the Bush dynasty consigned to the ash heap of history. P. had to somehow embrace his family—and its money—while also distancing himself from the politics of his grandfather, uncle, and dad. He had to abide Trump’s humiliation of “low-energy” Jeb in the 2016 presidential primaries, while trying not to be humiliated himself by Trump. He had to persuade a hard-right Republican runoff electorate—a sliver of a sliver of a sliver of the voting-age population—that it should trade Paxton, a no-apologies warrior for right-wing causes, for the fourth generation of an establishment dynasty. Like Schrödinger’s cat, he had to be both Bush and not-Bush.

In the end, it was too much. Given a choice between an (alleged) crook and a cuck, Republican voters eagerly went with the former. Bush certainly worked the angles during his campaign. Who could forget George H.W.’s grandson straddling a four-wheeler as he zipped alongside the border wall? Or the son of pro-immigrant Jeb and Mexican immigrant Columba musing to a Fox affiliate about arresting “illegals”? Or the whole koozie episode?

P. had entered the race against Paxton after a lifetime of speculation about his ultimate political ambitions—a whiff of entitlement that Paxton tried to call attention to. “It is a reality that he’s kind of the last [Bush] and they had big plans for him to be probably governor or president of the United States, and this was just a stepping stone,” he told Fox recently. Stepping stone or not, Bush clearly saw an opportunity in an incumbent with many self-inflicted wounds. In brief: the incumbent’s pending-for-seven-years criminal indictments for securities fraud, a federal investigation into corruption and bribery alleged by a half dozen of his top aides, and Paxton’s investigation into the state bar’s apparent investigation of him—not to mention that $1,000 Montblanc pen he allegedly boosted from another attorney. There was a lot to work with. And in his closing arguments, Bush tried to get voters to focus on Paxton’s deeds. “This race isn’t about my last name,” he said in a recent TV ad. “It’s about Ken Paxton’s crimes.”

In conventional times, Paxton’s baggage should have been enough to sink his reelection bid. But we decidedly do not live in conventional times. We live in an era in which many Texans cheered when the top law enforcement officer of the nation’s second-largest state—that’s Ken Paxton—brazenly tried to use the courts to overturn the presidential election results in four other states, in an apparent bid to win a pardon from the president. If the voters can stomach world-historical antidemocratic chicanery, how much can they be expected to care about some hard-to-explain white-collar crimes?

As one GOP consultant told me earlier this year, scandals just don’t register with voters as much as they used to. (That’s true on the Democratic side too.) Most Americans think most politicians are corrupt. Unfortunately, such a view is far from a political prophylactic. Quite the opposite, in fact. It allows for a further poisoning of the body politic through an excuse-making game of moral equivalency. If, roughly speaking, all politicians are corrupt, then you either withdraw from politics, as many do, or you throw in with whichever corrupt politician represents your views.

Paxton, it seems, intuited all of this. Rather than run from his alleged crimes and ethical lapses, he fashioned himself a martyr—it was him and Trump against the world. There’s been no Nixonian “I am not a crook” speech for the Texas AG. Paxton recently told Fox News that his legal troubles were the result of “the people I’ve taken on—the Biden administration, big tech.” This is absurd. His criminal indictment was handed down by a grand jury in Paxton’s home county . . . in 2015, five years before Joe Biden was elected president. The ongoing federal investigation stems from allegations made by his own former top aides, including Jeff Mateer, whose own far-right views on social issues derailed his nomination to the federal bench. Liberals these are not. But it didn’t matter.

Paxton, like Trump, understands something that Bush, a much more conventional politician, may not. Politics is tribal—and nowhere more so than in the malarial jungle of the GOP. Paxton bet that his bona fides as a tireless combatant in the culture wars, as an enemy of the libs, would matter more than his personal conduct. He was evidently right. It’s almost as if Republican voters have said: He may be a bastard, but he’s our bastard.

Join us Aug. 24 for a Tribune event with Rio Grande Valley-area lawmakers.