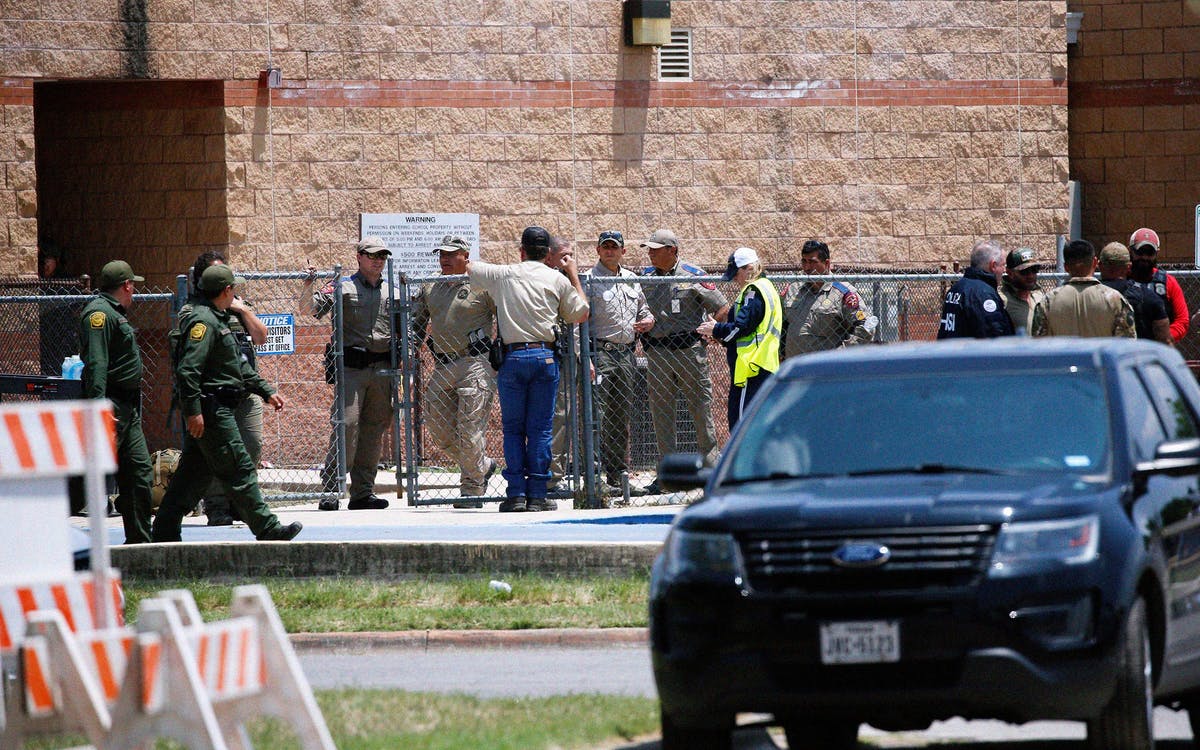 On Tuesday morning, an eighteen-year-old went into Robb Elementary in Uvalde, a small city 85 miles west of San Antonio, and began shooting children. By the time it was all over, he was dead, and so were at least eighteen kids, and at least one teacher. Seventeen children were taken to Uvalde Memorial Hospital, transported via ambulances or in the same school buses that brought them to school that morning. Two of them were dead by the time they arrived. Meanwhile, parents waited at the SSGT Willie de Leon Civic Center to find their kids. At least eighteen of those parents would be left to wait and watch as others were reunited with their sons and daughters until, eventually, they learned that they no longer had anyone to wait for.

At a news conference in the afternoon, Greg Abbott described what had happened. “He shot and killed horrifically, incomprehensibly, fourteen students and killed a teacher,” the governor said. In the hours that followed, the toll grew.

The shooting was without a doubt horrific. It wasn’t, however, incomprehensible. Abbott, who first won election in 2014, has had a lot of opportunities to learn how to comprehend this kind of violence. In November 2017, a man entered the First Baptist Church in Sutherland Springs and killed 26 people. Six months later, a seventeen-year-old high school student shot and killed eight of his classmates and two teachers at Santa Fe High School, outside of Houston. A little more than a year later, in August 2019, a far-right gunman who had posted a manifesto online drove from Dallas to El Paso and murdered 23 shoppers in a Walmart. Later that month, a shooter killed 7 people in Odessa and injured 25 others. Thus far in 2022 alone, there have been 21 mass shootings in Texas. Uvalde is just the deadliest.

Describing the shooting as “incomprehensible” is satisfying in some ways, because none of us want to live in a world where the murder of children makes sense. And most of us are in positions where each subsequent massacre can remain incomprehensible to us, as individuals who just live here, in a state where a trip to Walmart or a morning of worship or an ordinary school day can turn deadly, seemingly at random.

Abbott, however, is the governor of Texas. There are likely to be children who were killed in Uvalde whose entire lives, from beginning to end, were spent under his leadership. He sets the agenda for the Legislature, which his party controls. In 2018, after the Santa Fe shooting, he and Lieutenant Governor Dan Patrick briefly seemed interested in pursuing “red flag” laws, but those considerations ultimately fizzled out. Abbott may believe that gun control measures would be ineffective in addressing mass shootings, as Ted Cruz insisted in the immediate aftermath of the Uvalde massacre. He might maintain that the principle of gun ownership as a fundamental right outweighs the feelings of those who believe that they and their children would be safer in a Texas that had less access to deadly weapons. He may feel strongly that the steady expansion of gun rights Texas has enacted during his time in office—most recently with a law allowing the permitless carry of handguns—is more consistent with the values of his constituents than choosing not to pursue those actions. Those are policy issues, and of course Abbott may choose what gun policies to pursue as governor.

But this is a governor who continues, after nearly eight years in office, to find it incomprehensible when someone walks into a public place and murders a number of his constituents. Maybe Abbott just couldn’t find a word that means that it is very sad but not something he is interested in taking action to prevent from happening again.

Texans might want a governor who can comprehend tragedies that occur with terrifying frequency, but the issue of gun control in the state is a complicated one, and the only real alternative to Abbott in 2022 is El Paso Democrat Beto O’Rourke. O’Rourke feels strongly about guns and was at his most passionate on the subject in 2019, after the Walmart shooting in his hometown. “Hell, yes, we’re going to take your AR-15,” O’Rourke declared from the Democratic debate stage as he sought the party’s presidential nomination—a line that has haunted him ever since.

Texans may not support Abbott’s expansion of gun rights—59 percent of voters oppose the permitless carry law—but there are plenty who also don’t like O’Rourke’s proposal for mandatory buybacks of semiautomatic weapons. Which leaves Texans who are skeptical of O’Rourke, but who would also prefer to see the state take some sort of action in response to massacres like the one in Uvalde, without an avenue for change.

For the parents who spent Tuesday waiting at the civic center in Uvalde to see if their children would be getting off a bus, that’s unlikely to provide any comfort. For those parents, the world is more incomprehensible today than ever. It’s unfortunate that their leaders appear to be just as lost as they are.