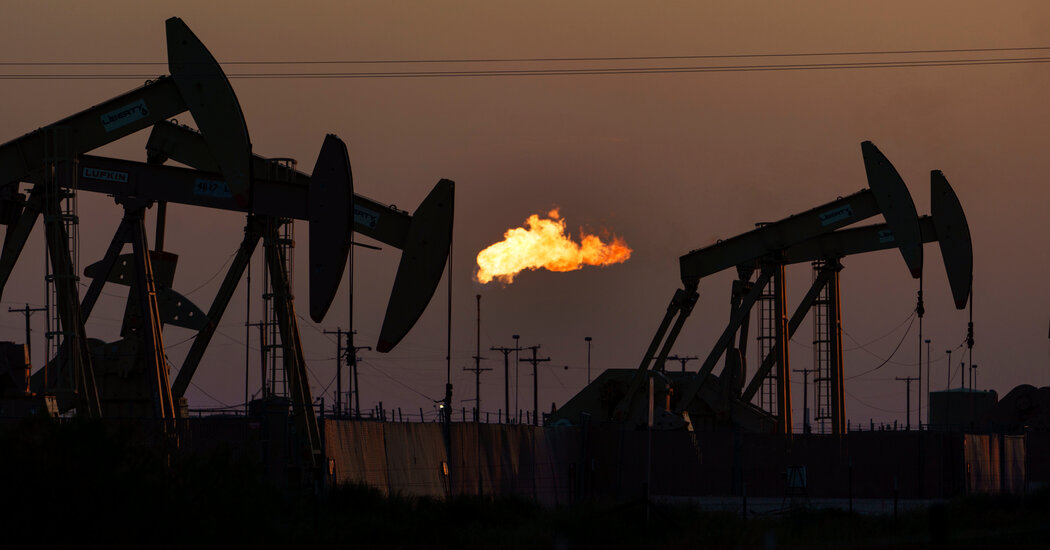 The oil industry practice of burning unwanted methane is less effective than previously assumed, scientists said Thursday, resulting in new estimates for releases of the greenhouse gas in the United States that are about five times as high than earlier ones.

In a study of the three largest oil and gas basins in the United States, the researchers found that the practice, known as flaring, often doesn’t completely burn the methane, a potent heat-trapping gas that is often a byproduct of oil production. And in many cases, they discovered, flares are extinguished and not reignited, so all the methane escapes into the atmosphere.

Improving efficiency and ensuring that all flares remain lit would result in annual emissions reductions in the United States equal to taking nearly 3 million cars off the road each year, the scientists said.

“Flares have been kind of ‘out of sight, out of mind,’” said one of the researchers, Eric A. Kort, an atmospheric scientist at the University of Michigan. “But they actually matter more for climate than we realized.”

“So if we clean up our act with these flares, we actually would have a much more positive climate impact than we would have realized initially,” Dr. Kort said.

Wildfire smoke pollution. Smoke from wildfires has worsened over the past decade, potentially reversing decades of improvements in Western air quality made under the Clean Air Act, according to new research from Stanford University. Some areas in the Western United States had increases in particulate pollution from smoke that were about the same amount as the improvements in air quality from regulating factories and other sources of pollution.

Relinquishing a fortune. Yvon Chouinard, the founder of the outdoor apparel maker Patagonia, transferred ownership of his company to a trust and an organization devoted to fighting climate change. The move comes at a moment of growing scrutiny for billionaires whose rhetoric about making the world a better place often don’t match reality.

Melting ice. In a more drastic forecast than earlier assessments, a new study found that the melting of the Greenland ice sheet could eventually raise global sea levels by at least 10 inches. The study reached the conclusion in part because it used a different measure to gauge ice loss that takes into account the warming that has already occurred.

Because methane is a stronger, though shorter-lived, greenhouse gas than carbon dioxide, efforts to identify and reduce methane emissions have intensified in recent years.

Methane is the primary component of natural gas, also known as fossil gas, which can leak into the atmosphere from wells, pipelines and other infrastructure, and is also deliberately released for maintenance or other reasons.

But vast amounts are flared.

Gas that is flared is often produced with oil at wells around the world, or at other industry facilities. There may not be a pipeline or other means to market it economically, and because it is flammable, it poses safety issues. In such cases, the gas is sent through a vertical pipe with an igniter at the top, and burned.

The International Energy Agency estimated that worldwide in 2021, more than 140 million cubic meters of methane was burned in this way, equal to the amount imported that year by Germany, France and the Netherlands.

If the combustion is efficient, almost all of the methane is destroyed, converted into carbon dioxide, which has less of an immediate climate impact. The Environmental Protection Agency, in studies conducted in the 1980s, calculated that flares destroyed 98 percent of the methane sent through them.

But the new research found that flaring was actually far less effective, especially when unlit flares were taken into account. Emissions from improper flaring accounted for as much as 10 percent of all methane emissions in the oil and gas industry, the scientists said. The findings were published in the journal Science.

The researchers looked at operations in the Permian and Eagle Ford basins in Texas and the Bakken in North Dakota, which together account for about 80 percent of the flaring in the United States. “The idea was if we can go do a nice representative sample in those domains, we’d get a good picture of what it looks like looks like across the U.S.,” Dr. Kort said. They sampled gas plumes from the flares by flying through them in a small plane.

They found that flares that were burning destroyed only about 95 percent of methane, not 98 percent. And they found that in some basins as much as 5 percent of flares were unlit. That brought the overall efficiency down to about 91 percent.

Flares can be affected by wind, which can allow some unburned methane to escape, or by the presence of other gases. Wind, changes in gas pressure or problems with the igniter can cause the flame to be extinguished, and if there is not routine monitoring, flares can remain unlit for a long time.

Riley Duren, chief executive of Carbon Mapper, a nonprofit group that is launching satellites next year that will detect and monitor sources of greenhouse gas emissions, said the findings were not surprising to those who have studied emissions from these oil and gas basins and know the amount of flaring that is done.

But the researchers’ comprehensive survey shows that inefficient flaring “is a more systematic issue,” said Dr. Duren, who was not involved in the study.

Elsewhere in the world, there is little direct observational evidence of flaring efficiency, Dr. Duren said. But globally, he said, “it’s likely the case that combustion and flaring is less efficient than assumed.”