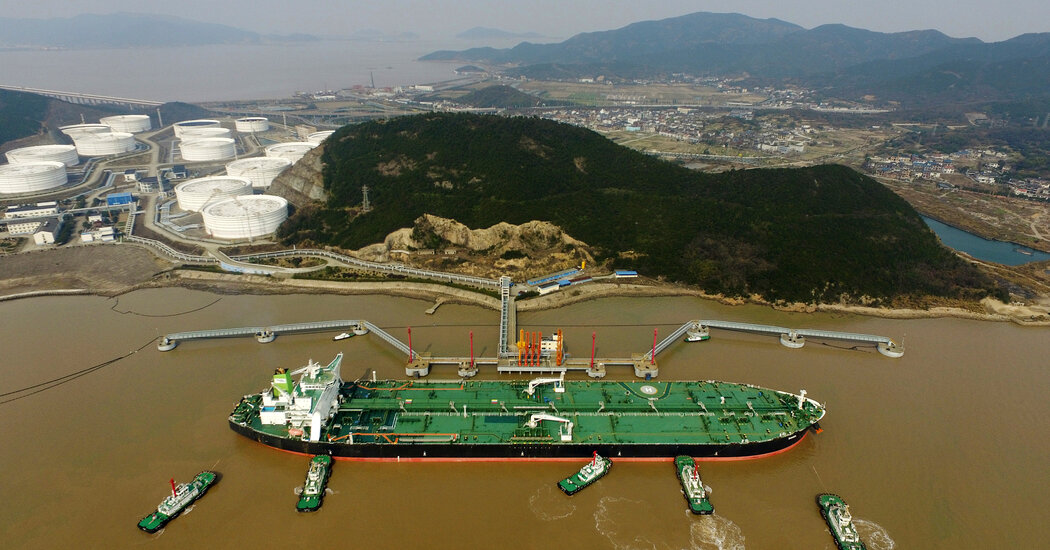 WASHINGTON — Shifting to a tougher stance on Tehran amid signs that efforts to restore the 2015 Iran nuclear deal have failed, the Biden administration announced on Thursday that it would impose sanctions on two Chinese companies that transport and store Iranian oil.

The Treasury Department also said eight entities based in Hong Kong, Iran, India and the United Arab Emirates had been designated as sanctions violators.

The actions come as officials in the Biden administration worry that more than 18 months of negotiations to contain Iran’s nuclear program may have reached a dead end and suggest they have begun reaching for new forms of leverage over the country’s hard-line leadership.

The sanctions against Chinese companies could also presage a tense confrontation with Beijing over its substantial purchases of Iranian oil, which have provided Iran’s government with a badly needed windfall, to the frustration of the Biden administration.

President Donald J. Trump withdrew from a 2015 agreement clinched by the Obama administration and imposed new sanctions on Iran, leading Tehran to significantly accelerate its nuclear program. U.S. officials estimate that Iran could be within one month of having enough highly enriched uranium to produce a nuclear weapon, which might take a year or more to build.

This month, the United States and Iran appeared on the brink of restoring the nuclear deal after the European Union presented a “final text” for their joint agreement. Biden officials say that Iranian negotiators raised 11th-hour obstacles, including a demand that the International Atomic Energy Agency close an investigation into past undeclared Iranian nuclear activity.

During a visit to the U.N. gathering, Iran’s president, Ebrahim Raisi, struck a bellicose tone and demanded more U.S. concessions.

As Iran struggles with punishing American sanctions imposed by Mr. Trump after he unilaterally abandoned the nuclear deal in 2018, China has helped Tehran stay solvent by purchasing large quantities of oil, which is its main export. Reuters reported in March that China now imports more oil from Iran than it did before Mr. Trump piled new sanctions on Tehran, citing data from three tanker-tracking companies that indicated China was importing around 700,000 barrels per day.

“China is principally responsible for keeping the Iranian regime in business through oil purchases that have totaled $38 billion since President Joe Biden assumed office,” the nonprofit group United Against a Nuclear Iran said in a report last week.

“China has therefore proven to be the savior of Tehran by continuing to import millions of barrels of oil every single day,” the group said, calling for tougher U.S. action against Chinese entities.

A State Department spokesman said on Wednesday that some public estimates of Iranian oil trade with China “have been inflated.”

Existing U.S. sanctions allow for penalties against foreign governments whose companies import oil from Iran, but the Biden administration has refrained from taking that step against China.

Instead, the administration has tried for months to persuade Beijing to prevent Chinese companies from facilitating the export of Iranian oil, but to little avail. Thursday’s action suggests that the Biden administration may be losing its patience with China and will take increasing unilateral steps.

The State Department said in a statement that as Iran pursues its nuclear program in violation of the 2015 agreement’s limits, “we will continue to accelerate our enforcement of sanctions on Iran’s petroleum and petrochemical sales under authorities that would be removed” under a restored nuclear deal.

“These enforcement actions will continue on a regular basis, with an aim to severely restrict Iran’s oil and petrochemical exports,” the statement said. “Anyone involved in facilitating these illegal sales and transactions should cease and desist immediately if they wish to avoid U.S. sanctions.”

The United States first imposed sanctions on a Chinese company for violating restrictions on the purchase of Iranian oil in July 2019, when Mike Pompeo, then the secretary of state under Mr. Trump, announced penalties against a state-owned oil trading company, Zhuhai Zhenrong, and its chief executive, Li Youmin.

After Washington imposed expansive sanctions on Iran in 2018, the Trump administration granted waivers to eight governments, including that of China, to continue importing limited amounts of oil. But those waivers expired in May 2019.

Zhuhai Zhenrong and Sinopec, another state-owned enterprise, were the largest importers in China of Iranian oil.

A New York Times investigation from August 2019 found that China and other countries were receiving oil shipments from a larger number of Iranian oil tankers than previously known. Even after the waivers expired that year, 12 Iranian tankers loaded and delivered oil across Asia and the Mediterranean, with six of those unloading their cargo at ports in China.

Last month, the State and Treasury Departments announced sanctions against six companies, four of them based in Hong Kong, for helping sell tens of millions of dollars of Iranian oil and petrochemical products.

Out on a spacewalk with Nasa astronauts at the ISS