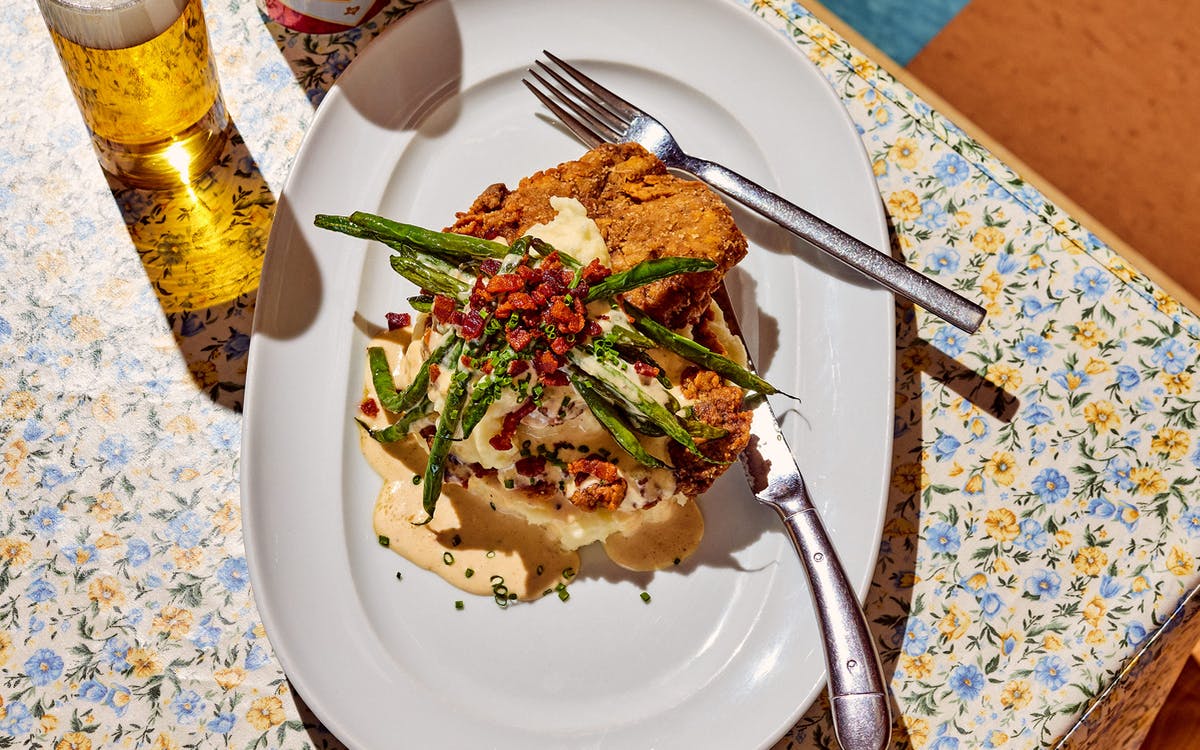 I was definitely expecting a restaurant dedicated to Texas eats to have some typical Texas touches. You know, a cowhide or two on the floor, a braided lariat on the wall, bandanna napkins. Makes sense, right? But the designers of Wild Oats had a different idea for this three-month-old spot, located in the newly revamped Houston Farmers Market. They went for knotty-pine benches, oilcloth-covered tables, and a checkerboard linoleum floor. The only buckaroo touch in evidence was near the bar, where rows of cowboy hats were mounted on the wall like so many deer trophies. This place is not about the Texas of big skies and wide-open spaces, the decor seemed to be saying. It’s about your grandmother’s kitchen.

“We are just scratching the surface of what we can learn about Texas food,” said Nick Fine, the enthusiastic 39-year-old executive chef, as he stopped by our table on the first of my two visits to the restaurant in March. Wild Oats is the latest in the ever-growing roster of dining concepts led by indefatigable Houston chef Chris Shepherd, head of Underbelly Hospitality. Ever since Shepherd and Fine, his culinary director, started to dream up the project, back in 2020, Fine has been obsessed with the dishes Texans think of as their own, seeking out local specialties when he travels and poring over traditional recipes. “I wish you could have seen the stack of old cookbooks I had on the dining room table,” he said. “The ones from church groups are amazing. I’d come home from work and go through them every night. I must have written down a hundred and fifty or more ideas that sounded promising. My wife finally said, ‘Nick, you’ve got to stop.’ ”

The Boerne-born chef intends to honor traditional recipes, while giving each one a distinctive twist. Underbelly, his partner Shepherd’s most famous restaurant (open from 2012 to 2018), celebrated the dishes of Houston’s huge and diverse population of immigrants, in both their pure form and with modern spins. In that spirit, Fine and Shepherd are respectfully riffing on Texas’s archetypal recipes. “I want,” Fine says, “to expand how we think about the food of our state.”

The menu at Wild Oats is not long, but choosing is hard because you want everything—this is our comfort food, after all. Following a lot of hemming and hawing, my fellow diners and I decided we should do chili shots as our first appetizer. You can get a cup or bowl of red, of course (the bowl comes with a bag of Fritos for a DIY Frito pie), but two-ounce shots turned out to be the right choice, the chili thin and brothy, with toppings that included yellow cheddar, jalapeño slices, and, of course, Fritos.

Next we decided to check out a party classic I hadn’t seen in ages: an unapologetic block of cheese covered in jalapeño jelly. “That was mainly inspired by my mom,” says Fine. “She always took it to get-togethers.” His version makes two great improvements: it trades in the stodgy cream cheese for a house-made ricotta-and-sour-cream blend and switches out the crackers for fantastic Texas toast brushed with jalapeño butter.

For our last appetizer, we went with a dish that Fine confesses he just discovered a few years ago: parisa. “My wife and kiddos and I were on a road trip,” he says, “and I saw it at a convenience store when we stopped in Hondo.” Listed on the menu as Medina County Steak Tartare, it’s a raw-meat-and-cheese specialty that was brought to South Texas in the nineteenth century by immigrants from Alsace, a region of eastern France whose culture incorporates distinct German influences. Wild Oats’ mild-mannered take on parisa consists of hand-chopped sirloin enriched with a local white cheddar and brightened with serrano vinaigrette. I quite liked it, but I do have a suggestion: don’t deep-fry the saltines that come on the side. It’s a fun idea, but it throws off the flavor balance.

Although we had just finished a meaty appetizer, we decided, for sentimental reasons, to try Tootsie’s Pork Steak, an entrée named for legendary Central Texas pitmaster Tootsie Tomanetz, of Snow’s BBQ. But the smoked and grilled pork shoulder came off uneven—some parts tender, others tough. A better option was the redfish on the half shell, brightened with an herby,
Mediterranean-style salsa verde and dabs of tart tomatillo chowchow.

Of all the entrées that night, the one that blew us away was the simplest: a half chicken dusted with Creole seasoning and a bit of paprika and so adroitly brined that even the white meat was juicy. (The thing was cooked, incidentally, over a live-fire grill, which the staff calls Grillie Nelson, designed and built by Austin’s barbecue maestro, Aaron Franklin.) If you get the fowl, you should consider a side of the pretty, multicolored whole carrots, lusciously simmered in orange juice and then lightly pan-fried along with smoke-tinged barbecue seasonings.

Despite having seriously overindulged the evening before, I was back the next day with a different group of friends. With supreme self-control we navigated the starters, first trying the Armadillo Eggs, a tailgate-style munchie that consists of a cheese-stuffed jalapeño wrapped in sausage and bacon and then smoked and fried. We ordered the intensely tart-sweet Bellaire Campechana, which was pure Houston fusion, the chilled crab and shrimp splashed with a mix of tomatillo salsa and Thailand’s funky-sweet nam jim sauce and then served up with Mexican tostadas and white, puffy Vietnamese sesame-seed rice crackers. And we sampled an inspired reimagining of county fair corn dogs: fat fried Gulf shrimp, their tails standing in for the usual skewers, coated in an exceptionally light batter, a technique inspired by Fine’s buddy Randy Evans, a former Brennan’s chef.

Then we got to the entrées. The night before I had skipped the chicken-fried Wagyu sirloin because while my inner Texan was basically shrieking “OMG!” my inner food critic was yelling, “What maniac would chicken-fry an expensive Wagyu steak?” Tonight, though, I decided to go for it, and three bites later, my eyes opened wide: the frying was expert, and the jalapeño-bacon cream gravy was ridiculously flavorful. Was it worth $42? Considering that I tasted sirloin and not a cheap, machine-tenderized beef cutlet; that the platter could have easily fed two; and that it came with an avalanche of buttery mashed russet and Yukon Gold potatoes—heck yeah.

But if you understandably decide to skip this gazillion-calorie treat, there’s another Texas classic that may be more to your liking: fajitas. These aren’t made with the conventional skirt steak. Instead, they feature short ribs, beautifully cooked in a marinade amped up with umami-rich Maggi sauce. Thoughtfully sliced from the bone, the meat came with all the usual over-the-top Texas accompaniments, including grated cheese and sour cream. (I think the kitchen needs a new supplier of flour tortillas, though; ours started out great and turned to leather in five to ten minutes.)

I was less impressed with the shrimp and grits. The crustaceans were lovely, but the so-so grits had been mixed with masa, which messed with the grits’ natural mild sweetness. A crispy-crusted pork shank, glazed in a local coffee-infused ale, was stellar, accompanied by almost yeasty spaetzle, a nod to Central Texas’s German heritage.

By now we were in the home stretch, with just enough room to try a few of the easygoing desserts. The dairy-soaked Mexican-chocolate tres leches cake was properly squishy. The cakey-style fruit cobbler was properly homey, with canned peaches for an after-school touch. But the most fun was the cocoa-flavored Texas sheet cake, which came in a half-size baking pan sided by ramekins of chopped pecans, multicolored sprinkles, and spread-it-yourself dark-chocolate icing.

Staggering out of the restaurant, I said goodbye to my friends and sat down to wait for my Uber and think about what Shepherd and Fine have wrought. As Fine has said, Wild Oats is their love letter to Texas. “It’s like what Chris did, expanding the Houston food scene,” he explained, speaking of Underbelly’s game-changing dive into the city’s immigrant cuisines. “My dream and hope are that we are doing things people have not seen in a Texas restaurant,” he said, “and that will expand what we think of as Texas food.” Judging from what I tasted, he’s got that part nailed.

This article originally appeared in the May 2022 issue of Texas Monthly with the headline “Recipe Revivalist.” Subscribe today.