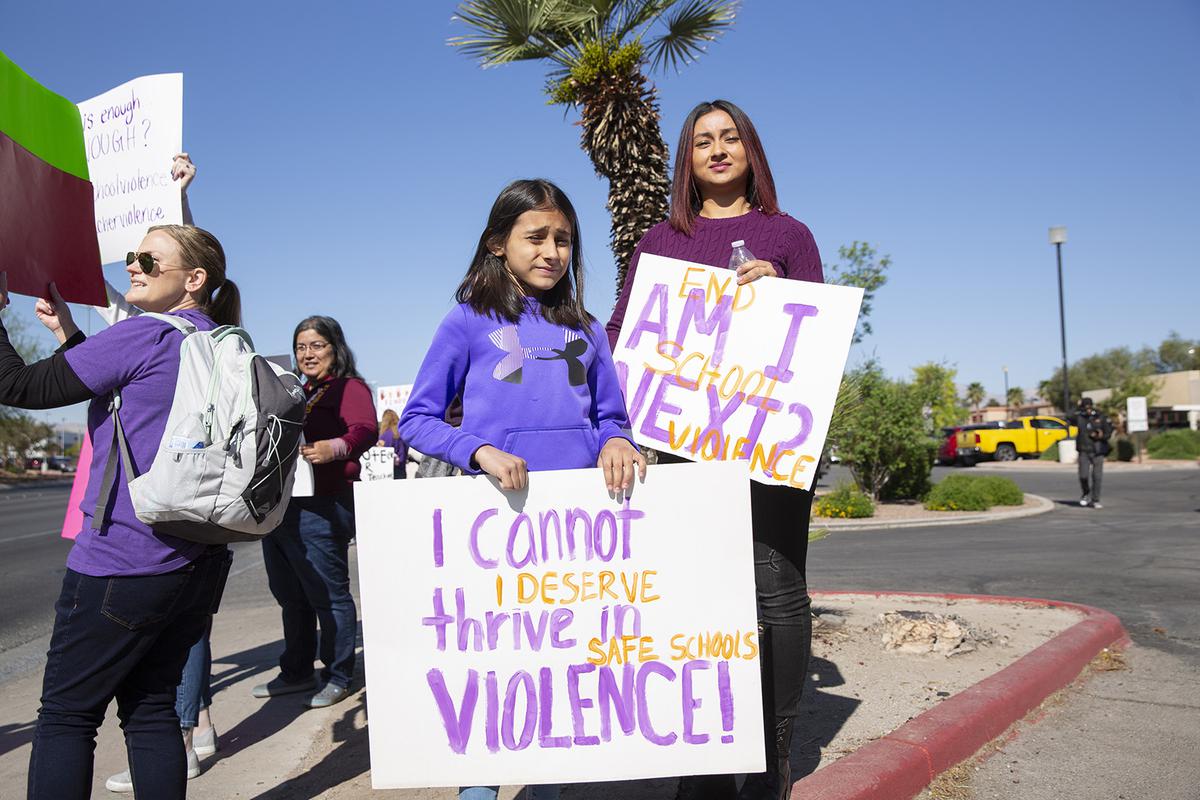 Teachers, parents and other concerned community members gather in front of the Clark County School District administrative offices to protest against campus violence and advocate for school safety, Wed. April 13, 2022.

On a Monday morning in January, a melee broke out at Canyon Springs High School.

It wasn’t one fight, but, according to Clark County School District Police reports obtained by the Sun, several that rolled through the quad and into the gym at the North Las Vegas school.

Nine students received criminal citations but at least 50 formed the initial nucleus of the fighting reportedly triggered by one boy calling another a racial slur in class, according to the report of one officer who responded to the Jan. 24 burst of violence.

As the fights snowballed, two assistant principals, a civilian security monitor and a janitor were pushed and struck as they intervened, reports stated. One of the assistant principals was kicked and punched in the head and legs as he was shielding a student on the ground. Officers reported deploying pepper spray at least five times.

“It is important to note, there was a large crowd (about 800 to 1,000 students) of scared students that had no involvement in the fights or disturbance trying to flee the area and get to a safe place,” one officer wrote.

School officials put the campus on lockdown, but the fighting continued in the gym where students were sent for their safety.

This wasn’t the only time something like this has happened recently in CCSD. It’s one of several high-profile incidents within the past few weeks that have teachers, parents and students calling for reforms.

Desert Oasis High School went into lockdown one day in March following brawls that included a parent and led to 11 arrests. The day before, it was locked down because of a false alarm over a student with a gun. Students described being terrified as they crouched in darkened rooms.

Unlike the churning scrums at Canyon Springs or Desert Oasis — and unlike anything that has ever happened in CCSD, campus police said — was the April 7 attack of an Eldorado High School teacher in her classroom after school. A 16-year-old student is being charged as an adult with 15 felonies, including attempted murder and sexual assault.

District officials and prosecutors admit that the intensity is increasing.

The Sun analyzed four years worth of data from CCSD Police, and found that the frequency of police calls is growing, too. This is what we found:

How many calls have school district police taken?

For the first seven months of this school year — August through February — CCSD Police took 6,827 calls for violent offenses. Police coded them under 11 categories:

How often are suspects arrested?

Of the roughly 6,800 violence calls, 775 led to arrests and citations, mostly for fighting, assault and battery.

“Arrest” means police booked the suspect into an adult or juvenile jail. A “citation” is a non-custody arrest, meaning the suspect was released with orders to appear in court later.

Is it getting worse?

With three months until graduation and five months until the next school year starts, this year was almost even with the 7,001 calls in all of 2018-19, the last complete school year without pandemic interruptions to in-person learning.

Because the shutdown spread over two school years, it might be more illustrative to compare points in time.

Calls for assault, battery and fighting:

Calls for harassment and threats:

All violent incidents leading to arrests and citations:

Does every call equal an actual incident?

Not necessarily. Some reports are closed without follow-up as “gone on arrival” or “unable to locate.” Others are deemed “unfounded.” There can be misunderstandings, like a noise that sounded like gunfire or explosives but was not, CCSD Police Chief Mike Blackeye told School Board members in March.

What doesn’t the call data tell us?

Dispatch logs show where the calls originated from, but not necessarily the incident. If an off-campus incident is reported to a school staffer who reports it to police, the call will show as coming from that school, Blackeye explained.

While dispatch logs may say if a suspect was arrested or if school personnel handled an incident without further police involvement, they don’t say if a student was suspended, expelled or sent to a behavioral school, nor if criminal charges were held up and how those suspects were sentenced.

It’s also unclear from the logs alone whether suspects or victims were students, staff or parents. In other words, it’s not clear from this summary how many calls involved student-on-student violence, staff as victims, or if the people involved were connected to the school at all.

But attacks on school staff are well-known. The incident at Eldorado was the most heinous, though not the first time this school year a staffer has been attacked by a student.

A recent survey by the Education Support Employees Association union showed that a quarter of CCSD support staff say they’ve felt threatened by a student or parent in the past year, and more than half say they feel less safe at work.

Brian Rippert, president of the Las Vegas-based Nevada State Education Association, said at a Wednesday rally for school safety that everyone in schools was in “survival mode,” and when they’re in that mindset, they “can’t do much else.” Children who feel unsafe can’t learn, he said.

Alexis Salt, who teaches English at Indian Springs middle and high schools, said the speaking out by exhausted and angry teachers would grow because the violence can’t continue.

“If teachers are not safe at school, I need every parent in Clark County School District to understand that neither are your children,” she said.

Where do these calls come from?

CCSD has about 350 schools, and about 320 of them reported at least one violent incident this year. The top 10 were:

What is CCSD doing about it?

District leaders have announced that batteries that net alleged student offenders a criminal citation, and fights that result in “significant campus disruption,” will now lead to expulsion, if confirmed by a newly reactivated expulsion review board. Expelled students will be reassigned to alternative education programs — in behavioral schools, or online or hybrid — and have to undergo rehabilitation before returning to their regular schools. The district will also funnel campuses to single points of entry.

The SAFE (Signal Alert For Education) System outfits staff with personal panic buttons they can use to notify first responders on a number of issues, such as school shooters or medical emergencies. Once the button is pressed, the system sends the employee’s specific location to responders, and distress messages can be delivered to colleagues via text and email.

Educators already have direct communication with school police, such as radios that allow principals to patch into dispatch as an officer would, and a code that teachers can enter into their classroom phones that alerts police and puts the school on lockdown.

“We are going to find the resources within the Clark County School District to protect our employees,” Jara said.

Clark County Education Association President Marie Neisess pleaded that this needs to be the beginning of the end of the extreme violence. Additional surveillance cameras and panic buttons are vital, and she said the burden was on Jara and the school district to get them in place as soon as possible.

“This cannot wait one more day,” she said. “We must act now.”

Democrats’ most crucial challenge, not just this year but in 2024