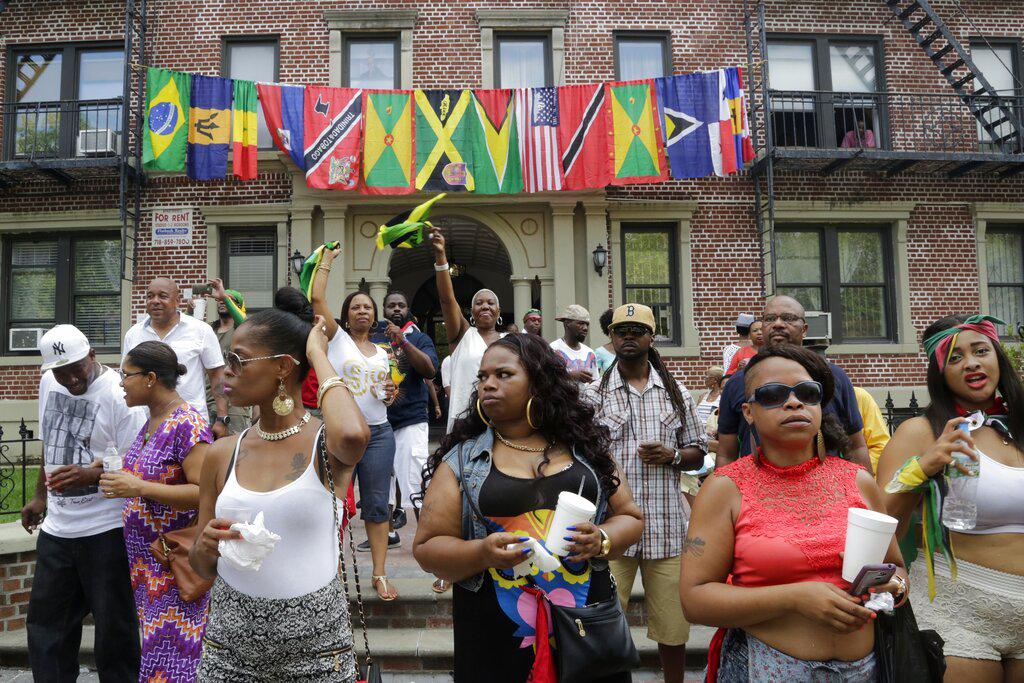 FILE – Flags representing Caribbean nations drape the front of a residential building as people gather outside to watch the annual West Indian Day Parade, celebrating Caribbean heritage, Sept. 1, 2014 in the Brooklyn borough of New York. A new report on Thursday, April 14, 2022 by Pew Research Center says a majority of Black Americans believe being Black is central to how they think about themselves and shape their identities, even as many have diverse experiences and come from various backgrounds. (

A majority of Black Americans say being Black is central to how they think about themselves and shape their identities, even as many have diverse experiences and come from various backgrounds, according to a new report by Pew Research Center. About three-quarters of Black people said so despite where they come from, their economic status or educational backgrounds.

Overall, 14% say being Black is only somewhat important to their identity and 9% say it has little to no impact, highlighting the diversity of thought among Black Americans, which include U.S.-born Black people and Black immigrants, and different ethnicities, political party affiliations and ages.

Pew Research Center released its report on Black identity on Thursday, and the results pinpoint the critical role race plays in shaping identity in the U.S.

Cox, who has worked with Pew Research Center in Washington, D.C., for about four years, said they wanted to make sure they had a large enough sample to “get this kind of nuance within racial and ethnic groups, but also to understand sort of life and society as Black people understand it.”

Shelly Eversley, a professor at The City University of New York, said the 76% of survey respondents who consider their Blackness important to their identity was still less than she would expect it to be because “race informs every asset of Black life.”

“Understanding the way race informs daily life is protection for a lot of Black people,” said Eversley, who has taught about race for 20 years and is interim chair for the Department of Black and Latinx Studies. She was not a participant in the report.

She said being Black is something you are aware of at a young age. Black children are often disciplined harder at school and other places, and their parents tend to have conversations with them about the dangers of racism when they are still young, she added.

The report also points to how the importance that people place on being Black fosters a sense of connectedness among communities, Cox said.

People who say that being Black is an important part of their personal identity were more likely to express a sense of connection with Black people in their local communities, in the U.S. and around the world than those who said Blackness is relatively less important.

Cox also said she was shocked to learn that place — or where people grew up and were living — played a large role in identity and how people shaped their values and what they viewed as important issues.

Black Americans cited violence and crime, along with economic issues such as poverty and homelessness as the most important issues to address in their communities, according to the report. The most important local issues named across subgroups of Black Americans does vary but often violence and crime, economic issues and housing issues rank among the top three.

Overall, 17% of Black Americans said the most important issue is violence or crime — a category that includes drug activity, theft and vandalism, among other offenses. Eleven percent cited economic issues as the most important, 7% cited housing and 6% cited COVID-19 and public health. Nearly half of Black adults said local leaders are most responsible for addressing these important issues.

A separate poll conducted in March by The Associated Press-NORC Center for Public Affairs Research revealed an overwhelming majority of adults say more progress is needed in achieving equal treatment for Black people in dealings with police and the criminal justice system. That’s two years after protests against the police killing of George Floyd in Minneapolis sparked a racial reckoning across the country.

When asking about community issues, the survey used an open-ended question, so “the answer of what Black Americans think is important is a little more multilayered than just violence or crime,” Cox said, noting that there is so much more that goes into that category than police violence.

The report also showed that about half of Black people who say being Black is crucial to personal identity feel very or extremely informed about the history of Black people in the U.S. Of that group, about half say they learned that history from family and friends. A large majority, regardless of how Blackness shapes their personal identities, say they have spoken to their families about their own history.

“The clarity in which family as a source of history for both U.S. Black history, like the kind of history we expect to learn in school, and ancestral history, what we learn about our family histories, was very interesting. It came through so strongly,” Cox said. “What that is telling us, is it confirms what scholars and historians have told us about the strength of family for Black Americans, especially in terms of greater knowledge.”