For Ginebra to wrap this up, Cone says Kings must stay in present 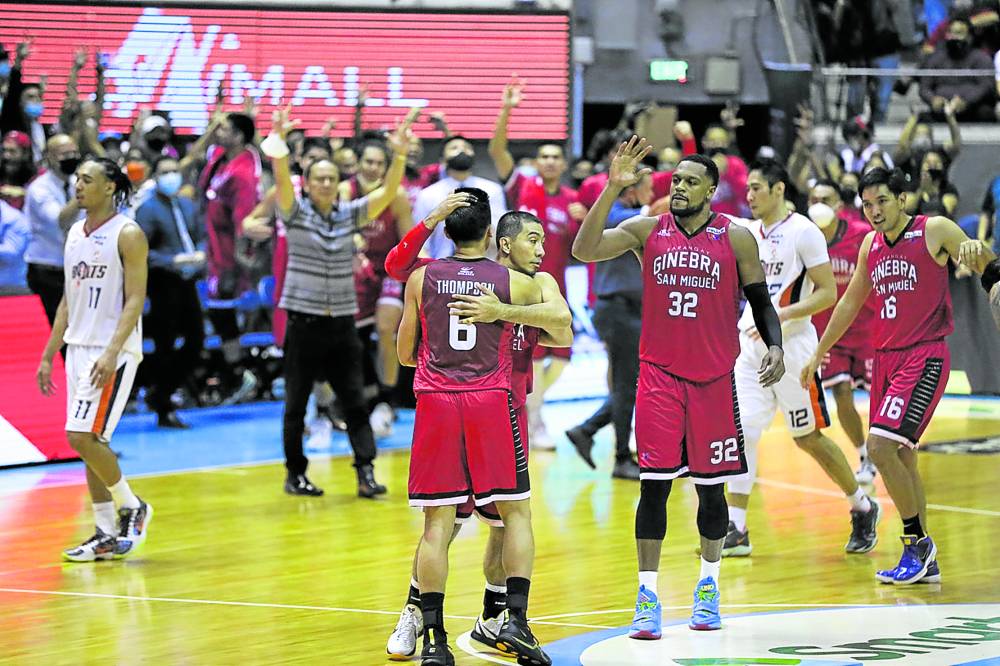 Scottie Thompson and LA Tenorio (background) hope their next hug would be because of another title. —PBA IMAGES

Barangay Ginebra stands on the brink of yet another successful title defense of the PBA Governors’ Cup.

But coach Tim Cone knows all too well how perilous the coming days are going to be for his Gin Kings.

“We know that trying to beat a good team like this three times in a row is nearly impossible,” he said on the heels of a 115-110 Game 5 victory over Meralco on Sunday night at Smart Araneta Coliseum, where Ginebra took a 3-2 lead in their best-of-seven series after a second consecutive win.

The decorated mentor was referring to Ginebra and Meralco’s duel back in 2017, where the two clubs figured in a no-tomorrow clash at the massive Philippine Arena in Bulacan before a league-record 54,068 fans.

There, the Gin Kings fended off the Bolts behind eventual Finals Most Valuable Player LA Tenorio to repeat in the season-ending showcase.

Cone’s cautious optimism also stems from being in an all-too familiar position many times over. Being in 35 championship duels, and winning 23 titles that include a pair of Triple Crown sweeps has made Cone, if anything, an expert at navigating situations like this.

“The danger is, from a coaching standpoint—and even from the players’ standpoint—is that you start thinking about the result of the game. What’s going to happen after the game rather than staying in the moment or before the game,” he said.

“You start thinking about being a champion, or what you’re going to do after that. It’s really hard not to think that way if you’re this close,” he went on.

“It’s so easy to look beyond. I know. I find myself in there … all the time,” Cone added.

The key now for Ginebra is to stay in the present—and with a couple of days’ worth of rest until the next contest where a capable and vengeful Meralco side awaits—and be prepared to battle.

“You really gotta battle yourself to stay in front of the game,” Cone said.

“We’re not thinking of one game to go, we’re just thinking about what’s the process to be able to get to that next win.” INQ