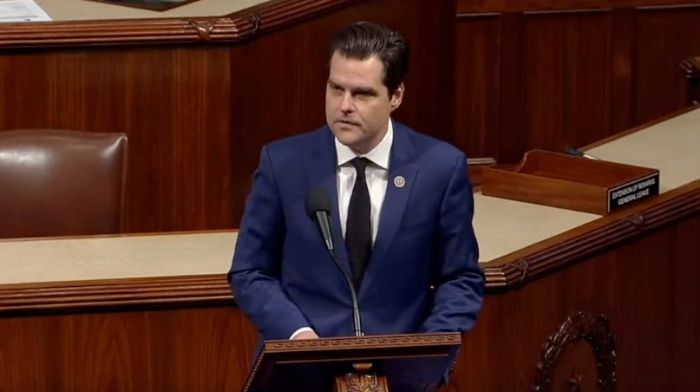 As Congress rubber-stamped the Biden administration’s request for billions of tax dollars to be sent to Ukraine, Florida Congressman Matt Gaetz, one of only 57 Representatives to vote against the latest aid package, took to the House floor.

His purpose: to ask valid questions and remind the rest of his House colleagues that, unity isn’t synonymous with ‘good,’ and that he and every other American has the right to question America’s involvement in Ukraine.

Gaetz stated, “Madame Speaker, I rise today to warn of a dangerous bipartisan consensus that is sleepwalking us into war.”

The uni-party Rs NEED TO GO
Can’t have them crying about the border, inflation and formula shortage then celebrating 40+B to Ukraine. @mattgaetz

When speaking about the “unity” in Congress of wanting to help Ukraine, Gaetz related a quote from Sen. Rob Portman (R-OH) who said, “I haven’t seen this kind of unity since 9/11.”

It was here that Gaetz asked a valid question, “What does it really mean? Unity always seems to come before the worst decisions we make. Our drive to unity often overruns our reason and discernment.”

Gaetz then gave the dubious list of recent “unifying” events. He stated, “Post 9/11 consensus gave us the Iraq war and the Patriot Act. COVID lockdowns and mandates came from unity bundled by fear. Defund the police took off because dissent wasn’t allowed. You were shouted down as a racist.”

Gaetz then said the quiet part out loud about anyone who questions America’s aid to Ukraine, “Just as now, questioning our actions in Ukraine makes you a traitor.”

What exactly is in this bill? What non Ukraine pork is buried in the bill? Can their be an audit on where all the Ukraine money has been spent? Do not waste our money@GOPLeader @SteveScalise @mattgaetz @RepStefanik @RepMTG https://t.co/IXX5ZZKAiJ

Matt Gaetz attempted to arouse Congress out of its amnesia. Now it appears that the politicians are eager to jump into another war, one where the opposition is much better able and equipped.

He continued, taking a swipe at aging congressional leadership in the process, “Do we have amnesia? Is memory loss a consequence of the gerontocracy of Congress? Just a year ago, we lost a war to goat herders waving rifles, now we are rushing to fight a nation that possess 6,000 nuclear warheads.”

Gaetz has also made the observation that, “Representatives recklessly assert that ‘we are at war’.” He quoted his colleague, Rep. Seth Moulton of Massachusetts who recently stated, “We’re not just at war to support the Ukrainians, we’re fundamentally at war, although somewhat through a proxy, with Russia.” What?!

Just a year ago, we lost a war against goat herders waving rifles. Members of Congress are now recklessly asserting that we are at war with Russia.

If we are at war, then why not vote on an AUMF?

We are sleepwalking into a war, and the American people are left in the dark. pic.twitter.com/vN3xHT0JZ6

The Most Important Question Of All

Matt Gaetz then asked the question that, while maybe no members of Congress are asking, but surely must be at least entering the minds of the American people, “How exactly is this supposed to end? It’s as if the administration is probing Russia’s nuclear red line. A game of chicken between nuclear powers is insane!”

He added, “last night, this House approved $40 billion for Ukraine as American families go without baby formula. To put that in context, the Biden budget calls for $15.3 billion for Customs and Border Patrol. Apparently Ukraine is twice as important as our homeland.” This also comes as Americans continue to struggle with gas and food prices.

Gaetz continued to speak of the massive amounts of weaponry going to Ukraine, which may not always remaining in the hands of Ukrainians, if we learned anything from Afghanistan.

Gaetz relays that one official said weapons, “drop into a big black hole. Many are ending up in the hands of the Azov battalion, 40 House Democrats called them a neo-Nazi foreign terrorist organization just three years ago! Now that they are killing Russians, are these avowed ethnonationalists apparently not so bad?”

But it was here that Gaetz called out Democrats’ activities for exactly what they are. “Democrats go on a daily snipe hunt for white supremacists every day in America, and yet they’re fine with giving rockets to actual white supremacists in Ukraine. It’s Javelins to neo-Nazis today, stinger missiles to the Mujahideen in Afghanistan yesterday.”

Matt Gaetz wrapped up with the real objective behind sending billions of dollars to Ukraine, and the attempt to paint anyone who might question it as some sort of “puppet of Putin.”

“The swamp would rather talk about saving democracy than our actual dangerous reality. If America is really is at war like Congressman Moulton says, then why not vote on an authorization to use military force?”

“Or are we going to operate like we did in Yemen and through the world, forever undeclared wars? I suspect many in this body won’t want a vote or a debate because regime change in Russia is their actual objective, not defending Ukraine.”

Matt Gaetz gave a short and sweet summary, “We are sleepwalking into a war, and the American people are left in the dark.”