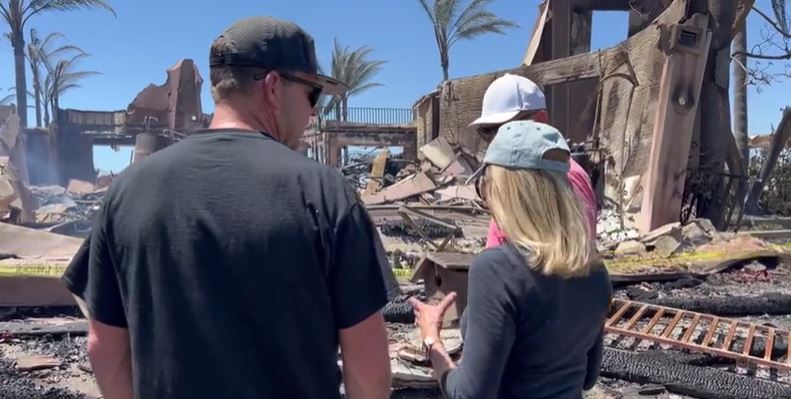 Tammie knew she had no choice. She and her family had to flee.

“I look outside … brown, red and orange plumes of smoke bellowing over the condo across street,” she said.

She got out with her 5-year-old and tried to convince them that a night at a Red Cross evacuation center was like a campout.

“What’s important is that everybody comes out alive.”

She did not lose her home, but two dozen others did.

Keith Morey says his Tesla was inside his three-car garage.

Neither he nor his wife were home when the Coastal Fire made it’s unwanted arrival.

Five bedrooms, four and a half baths and nine years of life under that roof are gone.

“You think I should be devastated,” he said. “I just move forward. Lingering on the past doesn’t do anybody any good.”

Firefighters salvaged a computer and the couple’s wedding photo.

Some homeowners count their blessings because their homes were saved but others feel lucky that small items survived. John Cadiz Klemack reports May 12, 2022.

Across the street Sandy Vogel looked back on the house that once stood at 19 Coronado Pointe.

“That was the living room,” she said. “That was family room.”

It was the place where she raised a family and built decades of memories. She and her husband bought the house when it was new, 30 years ago.

“You can get through whatever devastation you’re dealt,” she said. “It’s not always easy but you can make it as long as you’re OK.”

Sassan Darian is being forced to start over.