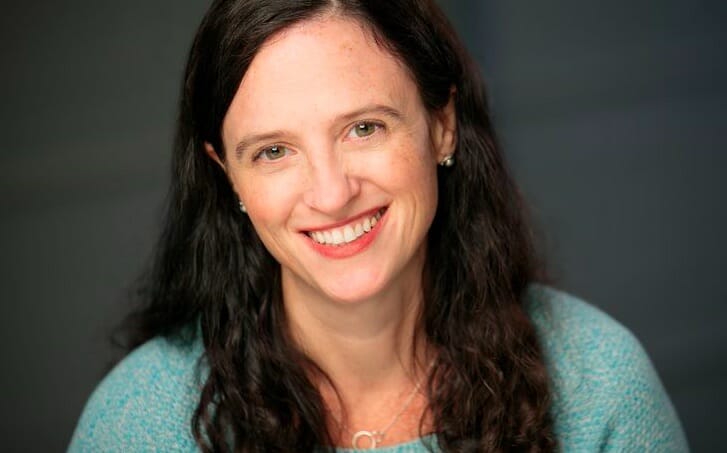 (Editor’s Note: The “Everyday Heroes” series is a collaboration between The Atlanta Journal-Constitution and it’s journalistic partners, including ArtsATL.)

When Ariel Fristoe and her family moved into the Historic King District in downtown Atlanta, she had no idea how segregated her world was.

The agnostic child of theater parents, she grew up around people from different backgrounds. However, her engagement in investigating and identifying systemic racism and inequality was few and far between. She never had to think much about what was happening with her neighbors.

“I didn’t really know anything,” admits the 47-year-old. “I had not really thought deeply about not only segregation or discrimination but also how much the cards are stacked against people of color.”

Making roots there, however, was intentional. They enrolled their kids into Hope Hill Elementary and began attending Sunday morning worship services at one of the area churches.

“As a ‘new Christian,’ I remember asking myself at the time, could I start believing this stuff?”

In that church, she quickly started to believe something else and realized how out of touch she was.

Who is your neighbor? The question kept coming up during Sunday morning worship. The more the question was asked, the more she contemplated. Did she know the people she called her neighbors? And not just the ones who lived next door, across the street, or up the block. Did she know the people who made up the historic district she now called home? What were their lived experiences? What were the challenges they faced?

“It was a real turning point for me,” she said. “We are so segregated, even in our own neighborhoods. Many of us never have meaningful interactions with each other. We can be neighbors, but because of our differences, we are incapable of connecting genuinely.”

Now some 14 years later, Fristoe reflects on that time. There was no way she could have imagined that church would be where she would find a renewed purpose, which led her to co-found Out of Hand Theater.

Out of Hand works to influence social change by working at the intersection of art, social justice and community engagement. As artistic director at the theater, Fristoe pairs her artistic identity with her passion for social justice – particularly racial and economic justice.

“When most people think of the performing arts, they think of it as entertainment and art for art’s sake,” she said. “I consider my work to be part of the ongoing civil rights movement.”

Equitable Dinners is just one of several programs sponsored by Out of Hand in which they seek to impact social change through conversation. This year, just after Labor Day, they held their first in-person dinner since the pandemic. The plan was to gather 5,000 people at 500 dinner tables across the metro Atlanta area. It was their largest gathering to date.

During the event, professional actors and actresses performed a short, original play on the experience of being Black in Atlanta. The play launched a conversation about race and equity in Atlanta, past, present, and future.

“From Sandy Springs in the north to Bankhead in the south, Serenbe to Rockdale County and beyond, people gathered to look at what race relations actually look like today,” she said. “The role I play is that I use the tools of theater and film to touch hearts so that conversations around justice are had to help people to be more informed. Eventually, they become more emotionally engaged. Open hearts lead to open conversations that lead to open minds.”

WE’RE STRONGER TOGETHER: A SPECIAL PROJECT

This place we call home is filled with ordinary people who accomplish extraordinary feats. Their selfless acts make this region so special – and they bring out the best in all of us. With the holidays upon us, we wanted to share their inspiring stories, celebrate their accomplishments, and offer ways that you can help.

Just as the 55 people we’re profiling can’t do it alone, nor can we. That’s why the Atlanta Journal-Constitution worked closely with our partners (including ArtsATL) to bring you this collection of uplifting stories.

We hope they leave you feeling inspired and ready to tackle the busy new year that lies ahead. We hope they make you feel more connected to your community or to your neighbors.

And maybe, just maybe, they will motivate you to come up with your own small way to make a big difference in the lives of others.