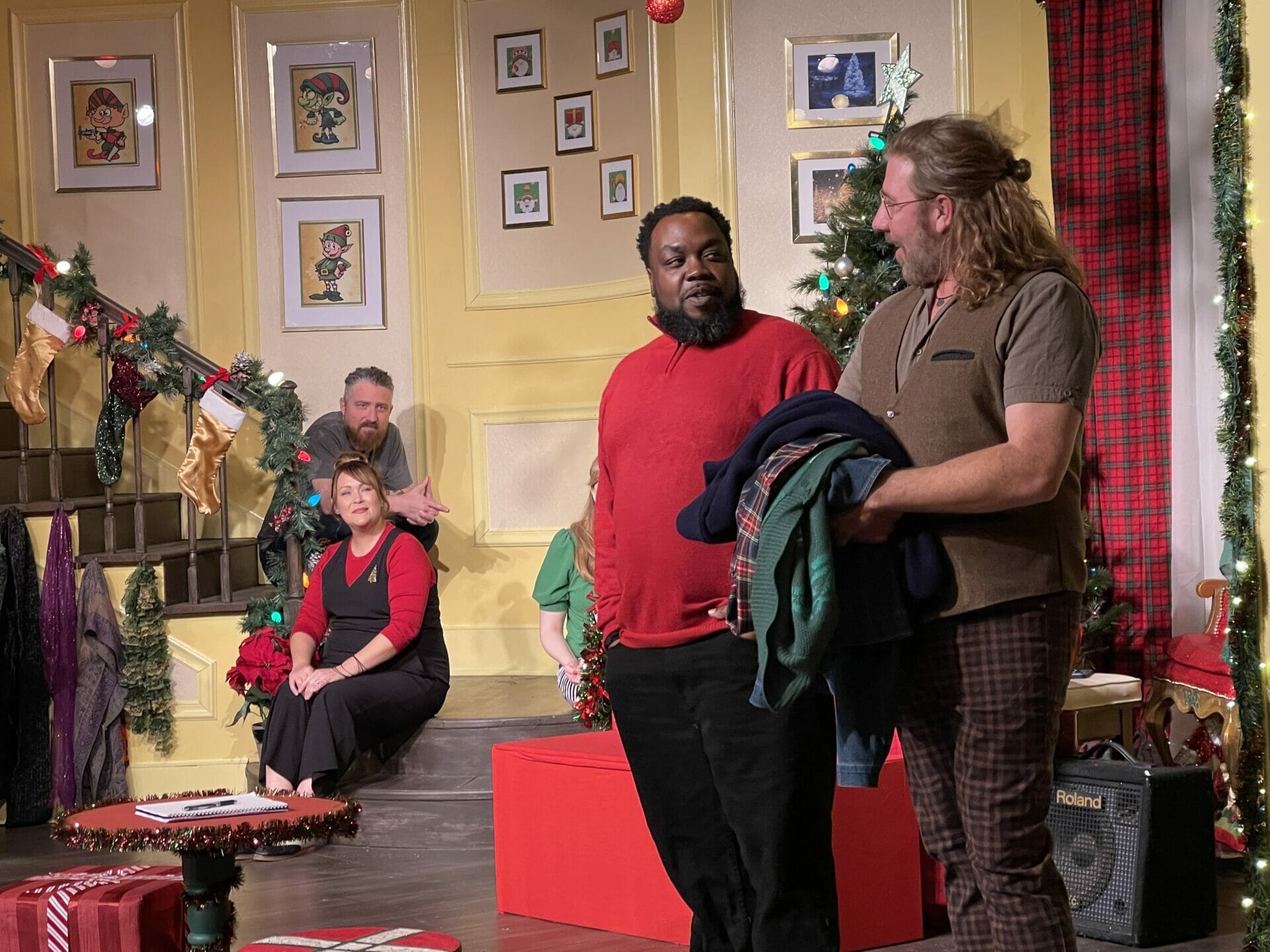 Those Christmas-obsessed heroes and heroines from made-for-TV romances get to choose their own unscripted adventure in Y’allmark Christmas: An Improvised Holiday “Movie”, onstage at Horizon Theatre through December 23.

Though audiences can still expect that wholesome holiday spirit during every performance, each has a touch of wacky subversiveness as well. The show was devised by Amber Nash, star of TV’s Archer and a longtime Dad’s Garage improviser, and Topher Payne, an actual screenwriter of several Hallmark Christmas movies, including Broadcasting Christmas and A Gift to Remember.

“Topher was essential from the very beginning when I first had the idea to do this show,” Nash said. “There are other improv troupes doing Hallmark movie spoofs, but I can guarantee you they don’t have a real Hallmark movie writer narrating them.”

“Topher’s not just a writer,” Nash said. “He’s also a brilliant presence and stage performer. So it’s not like we’re pulling some curmudgeonly old writer out of a basement.”

The improvised show, which began in 2017 as a two-performer, 20-minute sketch at Dad’s Garage, now contains a rotating cast of performers, special guests from across Atlanta stages, two acts and an intermission.

As the narrator in the original sketch and in the new show, Payne appears on stage alongside the improvisers, offering guidance to the story and “network notes” for when things go inevitably awry — like when a dreamy-eyed girl-next-door accidentally plummeted down the side of a snow-covered mountain at a Thanksgiving weekend performance.

“I come in with the goal every night of writing a Hallmark movie, and I’m going according to network notes I’ve received before, brand-identity specifics that I have to keep in mind when I’m writing,” Payne said. “And the cast doesn’t have to try and mess with me. The comedy comes out of a group of people actually trying to do the movie right, the push and pull of that and moments of clarifying what is brand-specific versus what isn’t.”

At other points, Payne stops the show if the language gets too PG-13 or if the actors give their characters sexual impulses or a bleak backstory. This lends the show a behind-the-scenes feel, like the plays Noises Off and The Play that Goes Wrong.

This is the first co-production of Horizon Theatre and Dad’s Garage, and Nash finds the expanded show and the Horizon stage very exciting.

“In the beginning, it was just Topher and two improvisers,” she said. “For this run, we have a big, beautiful Christmasy set. We have many more costumes and wigs because, apparently, if you shake Horizon Theatre, wigs fall out of it. They have great stuff.”

The set for Y’allmark Christmas is the same set as Horizon’s previous production, Designing Women, but that construction, designed by Isabel and Moriah Curley-Clay, has been repainted and decked out with holiday regalia for the season. It also has coat racks and shelves filled with potential costumes and a wall full of wigs that performers can choose for their different characters.

The cast, featuring Nash, Kevin Gillese, Eve Krueger, Freddy Boyd, Jamila Porter and Joshua Quinn, will alternate between leading and supporting roles within each performance. Every performance will also feature a special guest star, such as Enoch King, Tom Key or Gina Rickicki. Having that expanded cast will also allow for diverse variations on the Hallmark brand of storytelling, Payne said.

Audience suggestions are also taken during the show, which Dad’s Garage fans will find more familiar than Horizon patrons might. But the show should appeal to both audiences.

Krueger, who appeared in the cast of Designing Women and is company manager at Dad’s, suggested the partnership between the two theaters to Horizon artistic director Lisa Adler, who embraced the opportunity.

“It feels like communities coming together in a lot of ways,” Krueger said. “The Horizon audience and the Dad’s audience — there’s not a huge overlap in that Venn diagram, but I think this is a show that can hit both of them in a way that can really make everyone happy.”

Adler said holiday programming has always been a staple of the Horizon season, so she was encouraged when Payne and Krueger brought the show from Dad’s.

“We didn’t have another show running, so it was crazy not to try,” Adler said. “It’s a fun opportunity.”

Gillese first began performing in the sketch during the pandemic when he was quarantined with Nash, his wife. He always played his part during those months with a hint of reluctance, and the pair realized that challenging Payne as the writer was comedy gold.

The expanded Y’allmark still has those little clashes, which helps playfully skewer the genre.

Benjamin Carr, a member of the American Theatre Critics Association, is an arts journalist and critic who has contributed to ArtsATL since 2019. His plays have been produced at The Vineyard Theatre in Manhattan, as part of the Samuel French Off-Off Broadway Short Play Festival, and the Center for Puppetry Arts. His novel Impacted was published by The Story Plant in 2021.