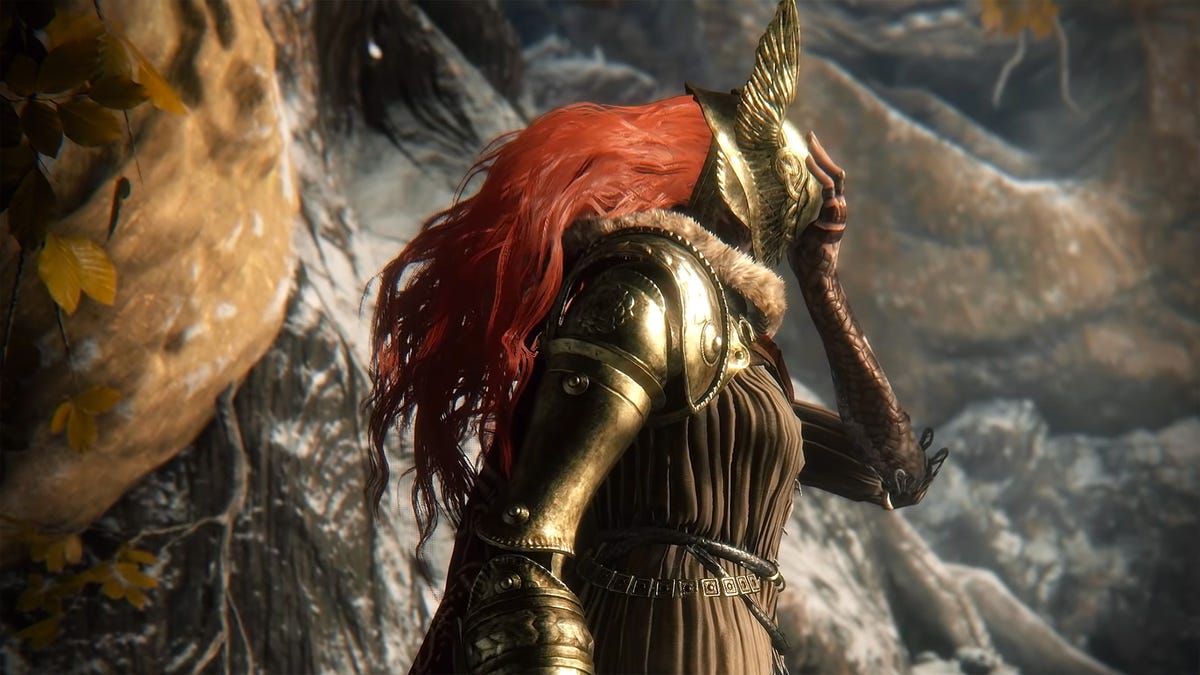 You’ve probably hit a number of Elden Ring bosses that just kick your teeth in. No matter how many times you leveled up or how reinforced your gear is, some enemies almost always beat you to a pulp. While Torrent is usually at the ready so you can flee a fight if the challenge becomes too tough, there are a few bosses—like Malenia, Blade of Miquella— that lock you in a 1v1 battle that could end in a controller-shattering death. Unless you decide to ask for help. And the hero who answers the call is”Let Me Solo Her,” a player who has recently become a legend within the Elden Ring community, kinda like the Fashion Police that pop up in Dark Souls 3.

The name Let Me Solo Her refers to Malenia, an optional late-game boss known by many to be one of Elden Ring’s hardest fights. Malenia is quick, has tons of range with her long katana, and enters a second stage that can one-tap you if you’re not careful. She’s a headache to deal with, but her drops are totally worth the frustration—particularly the katana’s Waterfowl Dance weapon skill, which unleashes a flurry of sword swipes all around you in rapid succession.

While Malenia is a hard fight for even the most skilled of players, Elden Ring features online multiplayer in a similar fashion as other FromSoftware games. After getting his ass kicked by Malenia some 20-30 times, Reddit user sazed813 decided to use co-op, and summoned Let Me Solo Her without knowing who the player was or what was going to happen. Sazed813 noted Let Me Solo Her’s odd attire right away, though. Dressed in nothing but underwear and a jar on their head, Let Me Solo Her wielded two katanas—the Rivers of Blood and what appeared to be an Uchigatana—and, like the name suggests, literally solo-ed Malenia, beating her without taking any lethal damage.

“He was flawless and put all my attempts to shame,” sazed813 wrote after the encounter. “I definitely didn’t kill Malenia, but either way, she is dead.”

There’s a reason why you’d wanna tackle Malenia, especially if you’re a samurai. Like the coveted Moonveil katana, the Hand of Malenia is a solid sword with long range and high damage, scales with Dexterity and Strength, and builds up bleeding. Notoriously, strong enough bleeding can kill certain things in Elden Ring within seconds, which has made it a popular build among fans. But Malenia’s also weak to hemorrhage and Let Me Solo Her wields two katanas that afflict the status effect, making it totally possible for that player to 1v1 her without any help. Clearly, someone’s been studying.

Since then, Let Me Solo Her (or characters purporting to be him) has been assisting anyone who beckons their name (on PC) for help with the Malenia fight. The community has taken notice of Let Me Solo Her’s bravery and heroism, immortalizing them in various fan art and 3D rendered sculptures and memes. It’s wholesome stuff, especially considering how antagonistic FromSoft stans tend to be.

Sazed813, the original Reddit poster lauding Let Me Solo Her as a hero, told Kotaku over Reddit that they shared their encounter with the heroic player because they forgot to capture evidence. As such, they wanted to immortalize Let Me Solo Her, but never expected the community to react like this.

“I was using a [Faith and Strength]build, fairly overleveled at around 130, getting frustrated at the slow animations of greatswords, and was probably a few attempts away from getting her down, but I wanted to summon just to mix things up,” Sazed813 said. “Typically, I don’t like summoning for the first kill of a boss. Anything else is fair game. It felt a little weird, watching someone else play the game for me. It was bittersweet, since I won’t be able to do it myself, but the experience and community reaction was worth it.”

Let Me Solo Her, who’s apparently a YouTuber named Klein Tsuboi, posted a video of them assisting two players by solo-ing Malenia. Tsuboi said their sign will always be down for any “desperate Tarnished” in need of help.

Kotaku has reached out to Klein Tsuboi and sazed813 for comment.

Let Me Solo Her isn’t the only player online with a specific gimmick. Tsuboi’s antics have inspired folks to solo other bosses, creating the Let Me Solo Him opposite dedicated to fighting the intimidating Mohg, Lord of Blood. It’s cool seeing the Elden Ring community come together to help each other. The game is tough and vague, so any assistance is welcomed.