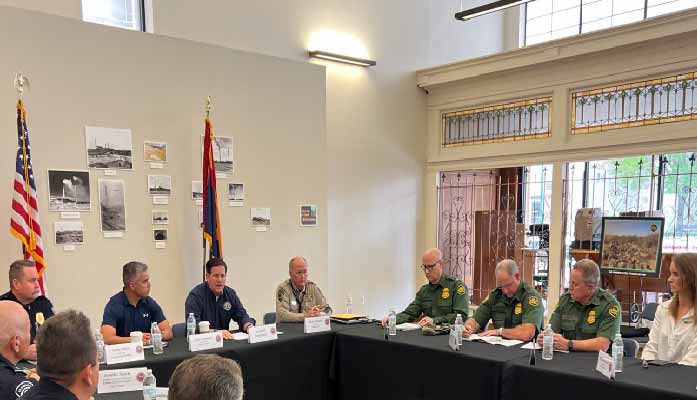 On Tuesday,  Governor Doug Ducey and 25 other governors launched a partnership, dubbed the American Governors’ Border Strike Force. The group says the purpose is ” to do what the federal government won’t: secure the southern border.”

The announcement by Ducey and Texas Governor Greg Abbott comes in the wake of a report by the U.S. Customs and Border Protection that disclosed migrant crossings along the U.S.-Mexico border are at the highest level in two decades.

The announcement also comes as the Biden administration is preparing to lift Title 42, a common-sense policy that has helped secure the border.

Ducey and his colleagues hope the “unprecedented collaboration among 26 states will fill the void created by federal inaction and work to secure the southern border by sharing intelligence, strengthening cybersecurity and improving efforts to protect children and families.”

In conversations with Governor Ducey, Border Patrol in Arizona expressed a need for more analytical and cyber assistance.

“Criminal organizations know how to exploit the crisis at the border, and are using it to flood massive quantities of fentanyl, heroin, methamphetamine and cocaine into our country,” said Tim Roemer, Arizona Department of Homeland Security Director and the state’s Chief Information Security Officer. “The Biden administration’s failed border policies have created a homeland security and humanitarian crisis — and every state in the country is paying the price. The American Governors’ Border Strike Force will increase collaboration and intelligence sharing across state lines so we can work together to keep illegal drugs out of our towns and cities.”

As a comprehensive force, states can act in cohesion across state lines to target transnational criminal organizations, and drug and human trafficking crimes financially and operationally.

The American Governors’ Border Strike Force will focus on these dangerous organizations, as the current largest threat to public safety at both state and local levels. By partnering across states, the Strike Force provides a force multiplier in the fight against criminal activity tied to the southern border.

The multi-state effort will:

While opioid-related deaths are at historic levels, fentanyl is streaming across the border and filling Arizona communities’ bloodstreams. Fentanyl overdoses have replaced car accidents as the leading cause of death for people 19 and younger in Pima County.