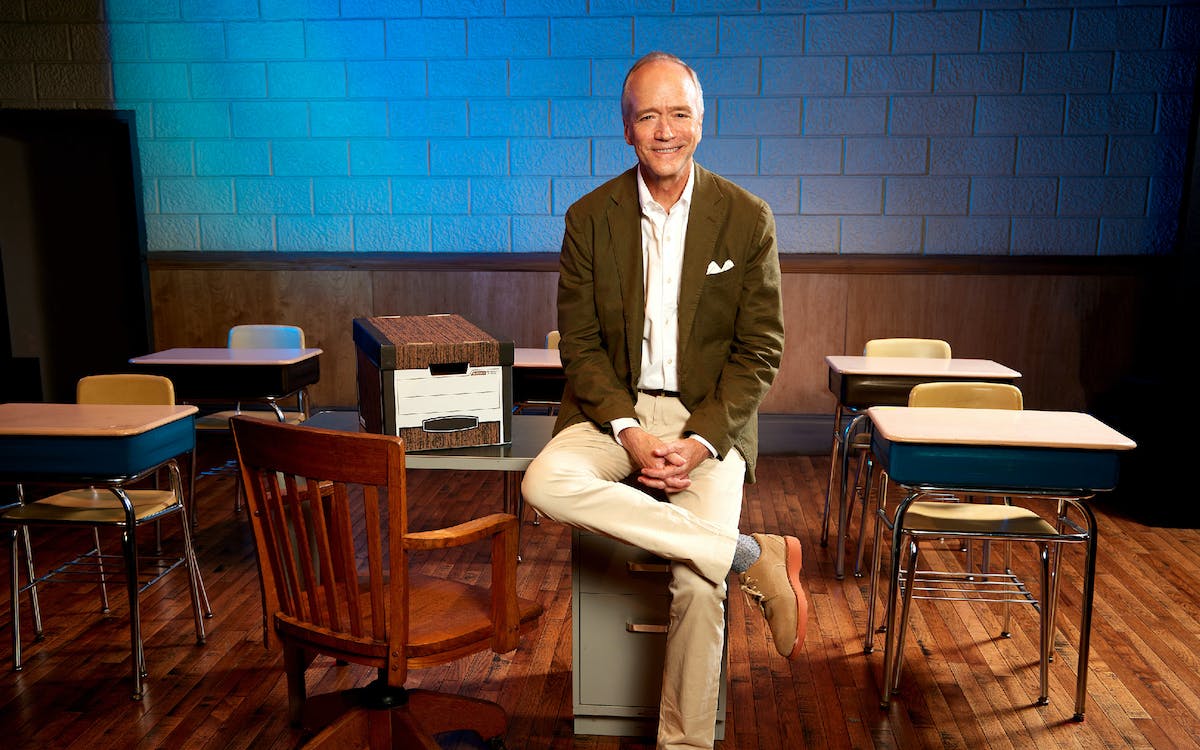 Douglas McGrath is best known for his work in film: as a cowriter for Bullets Over Broadway; a writer and director for Emma, Nicholas Nickleby, Infamous; and an actor in Quiz Show, Happiness, Michael Clayton, and HBO’s Girls. But on October 13, he will be returning to his first love, theater, in an autobiographical one-man show called Everything’s Fine, directed by John Lithgow. During a limited off-Broadway run at the DR2 Theatre in New York City, McGrath will revisit stories from his childhood in Midland—with particular focus on an eighth-grade teacher who, he says, “made a series of what appear to be insane decisions.” He spoke to us on September 23, between rehearsals.

Texas Monthly: How did Everything’s Fine come about?

Douglas McGrath: I had this very strange event happen to me when I was fourteen, which means eighth grade, in Midland. We got a new teacher. Is that an ominous phrase? We got a new teacher. She took an interest in me, by which I mean too much of an interest. I’m not going to tell you how it manifests itself, because it’s a series of shocking things. But I will say this: It’s not the cliché that you might expect. It’s not Summer of ’42. It’s not The Last Picture Show, though I wish it could be The Last Picture Show, because that’s a masterpiece. It’s a very surprising story about an older person needing things from a younger person. I know that’s kind of vague, but the show really has a series of twists that I don’t want to give away.

I’ve wanted to tell the story for a long time. In fact, in my twenties I tried to write it as a piece of fiction, as a short story. I toyed with that. It didn’t quite work that way.

But it never left me. When the pandemic came and I suddenly found myself with twenty-four hours a day of free time, I thought, I’m going to figure out how to tell that story. I wanted to weave it in with stories about my family because they have echoes, the two stories.

TM: Were your family members involved in the events with the teacher?

DM: What happened was so strange that at the time I didn’t tell my parents, and because I was older than my brother and sister—and in fact, still am older than my brother and sister—I didn’t tell them either, because I didn’t think they’d know how to deal with it. But in the show, you learn about my mother and my father, who are interesting people. They were not Texans, originally. My father was from Connecticut; my mother was from Ohio and had been living in New York working for Diana Vreeland at Harper’s Bazaar.

DM: Yes, I talk about that. The early part of the show is about my parents, and how they met, and their courtship. It’s quite funny—until the teacher arrives. It remains funny for a while, and then it starts to turn.

I only told this story once in person before I wrote the one-man show. Years ago, just after I’d worked at Saturday Night Live, I was at lunch with four or five great SNL people. I don’t know how it came up, but I said, “Oh, gosh, I have a story about a teacher, so I can’t tell the whole thing, but I’ll tell you just this little part.” And I told them the little part and they were so gripped. They said, “Well, wait, what happened?” And I was like, “Well . . .” and then I ended up telling the whole thing. I remembered how they sat there riveted to these events—and with actors or with writers or comedians, as a rule, sitting in silence is not their fallback position. Usually they interrupt, they find a way to bring it back to themselves.

DM: Uh-huh. And that, in its own funny, small way, stuck with me. I thought, “That story has some real power, both comic and dramatic power.”

TM: How did you decide to do it as a one-man show? Did you just figure that this was the best way to have control over it?

DM: Well, it wasn’t a control issue. Funnily enough, it came out of that lunch, because I remember the feeling of telling it myself. I love one-person shows—particularly if the actors are telling you something about themselves.

TM: This is real.

TM: You’ve done one-man shows before too, right? Although I guess most of that was a while ago—things like a Mark Twain Tonight! performance in college.

TM: And how did you get John Lithgow involved? He hasn’t directed in many years, right?

DM: He has not. I’m very lucky to count André Bishop, who runs the Lincoln Center Theater, as a dear friend, and so I asked him to read Everything’s Fine for dramaturgical help. He gave me wonderful notes, then he said, “I think I have a great director for you.” He suggested John Lithgow. I said, “Oh! John!” And [Bishop] said, “Now, I know what you’re thinking. You’re thinking, ‘Isn’t he an actor?’” But, he said, “John directed in his early career, and he recently did a one-man show for us at Lincoln Center, and so I think he’d be particularly sensitive to the challenges.” We sent it to John and he fell for it. He liked it.

DM: It was, although it was a little more performative, in a way, than mine. His has some similarities because I talk in my show about my father, and he talks in his show about his father.

TM: Does your eighth-grade teacher who is the subject of Everything’s Fine know that you’re about to tell your story about her publicly? Is this going to be a surprise?

DM: I thought I might reach out to her and see if we could discuss what had happened. Maybe with the passage of time, we could understand better why she’d made a series of what appear to be insane decisions. When I googled her, the first thing that came up was her obituary. She died about ten years ago, but she had lived a long, full life. She was in her nineties.

TM: Was it strange to read how the rest of her life played out after your encounter with her?

DM: No, it was very helpful to me. I have a supposition in the show that she ended up behaving the way she did not out of anything evil but out of loneliness. I think she was very, very lonely and she thought she could, in me, find some way to relieve that loneliness. I was fourteen and had my own friends and didn’t really want to relieve her loneliness much. I liked her. She was a very nice person, but she was, as you’ll see, a very, very needy person.

The obituary said that she and her husband started taking her history class on trips around the country. And I thought, “Oh, well, that’s interesting.” Her husband was not around when I knew her, and she and her husband had only recently moved to Midland. Maybe it was that she got there, he was distracted with the new job, she didn’t have any friends yet, and she kind of fell on me. But it sounded like he became more present. Maybe they passed through that crisis in their marriage and found each other again, which would be nice.

DM: I did. And after that, I wrote an adaptation of the Edith Wharton novel Age of Innocence, which we did at the Hartford Stage and then at the McCarter Theatre in Princeton.

TM: After so many years in film, is it gratifying to come full circle to theater?

DM: The first things I ever did were stage plays in the backyard and then in the Midland Community Theatre. It’s fun. Although, I will say after the first week of rehearsals, I was so exhausted, I thought, “Whose idea was this? This is exhausting!” I’ve been building up my stamina since then.