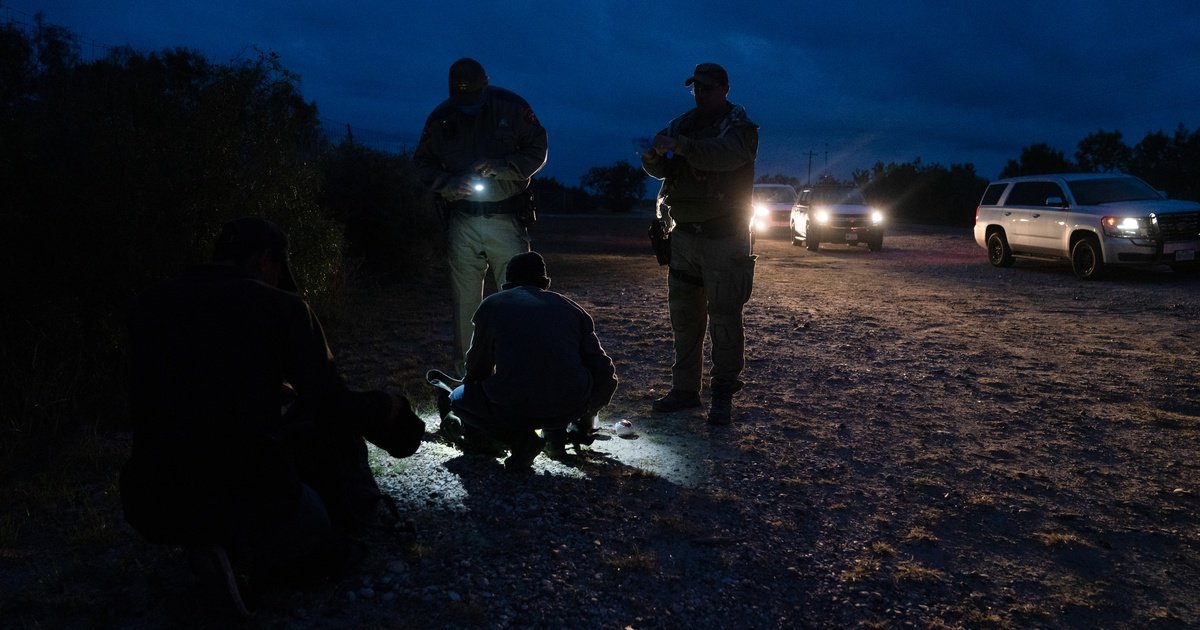 County officials in South Texas on Tuesday called on Gov. Greg Abbott to declare an “invasion” under the Texas and United States constitutions and begin using state resources to expel migrants, despite deportations being a responsibility of the federal government.

Over the last two years, the county officials said, their residents have suffered from the impact of the large number of migrants who have made their way through their counties on their way to the interior of the country, resulting in property damage, increased crime and danger for their citizens.

“The Biden administration won’t do a thing about it,” said Kinney County Judge Tully Shahan, whose county sits on the U.S.-Mexico border. “We’re in over our head. We need help and we need for Attorney General Ken Paxton and our governor to adopt an invasion under its definition in the constitution. Adopt that invasion and let’s move forward.”

Kinney County has been one of the focal points of the state’s border security efforts, with officials there arresting hundreds of migrants for criminal trespass on private land as a way to sidestep the local government’s inability to regulate immigration.

Shahan was joined in his call by local officials from Terrell, another border county, as well as Uvalde, Goliad, Burnet and Medina counties, which are not on the border. Shahan said Kinney County had signed an official declaration calling on Abbott to declare an invasion and other counties plan to do the same in coming weeks.

The call to invoke the U.S. and Texas constitutions to declare an invasion as a means to crack down on immigration is based on a fringe legal theory that gained mainstream attention earlier this year when Arizona Attorney General Mark Brnovich said that state’s governor, Doug Ducey, would be on solid legal ground to invoke war powers to send the state’s National Guard to its border to stop an “invasion” of drug cartels and criminal gangs.

The idea has been widely derided by legal experts as a political ploy by Brnovich, who is running as a Republican for a U.S. Senate seat in Arizona. It has also faced skepticism from fellow Republicans, including Ducey and Abbott, who in April expressed concerns that such a move could expose state law enforcement to federal prosecution.

Abbott said a former head of the U.S. Border Patrol — he did not name which one — had sent his office a memo acknowledging that risk. “And so, no one has talked about it,” Abbott said in April, noting his office had previously looked into the question of whether the state has the authority to deport.

On Tuesday, the county officials expressed thanks to Abbott for the money and support he’d provided them through his border security efforts, including his multibillion-dollar effort to send DPS troopers and National Guard service members to the border. But they said more help is needed.

Human smugglers are causing damage to property when they try to evade local law enforcement on their highways and county roads, they said. Their sheriff’s offices are overwhelmed by the amount of smuggling and are taken away from their other duties.

Throughout the news conference, county officials described the hundreds of smugglers and migrants their law enforcement officials had arrested as an “invasion” and called on state officials for help.

Immigration rights groups have repeatedly condemned referring to migrants as an “invasion,” noting the rhetoric is dangerous to Latino communities and was cited by the El Paso shooter who killed 23 people in 2019. Law enforcement said the gunman left a message saying the attack was “in response to the Hispanic invasion of Texas.” Of those killed, seven were of Mexican descent.

The state Legislature has allocated $4 billion to border security during this two-year cycle. Yet even as Abbott has sent thousands of troopers and service members to the border, the number of migrant encounters at the country’s southwestern border remains high. In May, the agency reported 239,416 encounters. That’s more than the 173,277 encounters in March 2021, when Abbott first initiated his highly touted Operation Lone Star.

The county officials blamed President Joe Biden for the continued high numbers of migrants, saying his “open-border policies” laid out an “invitation” for migrants to come to the country. But Biden has been forced to keep in place many of Trump’s policies, including Title 42, the public health order which was used by immigration officials to turn away migrants at the border during the pandemic.

Biden planned to end the program but was blocked from doing so by a federal judge. Another judge blocked Biden’s attempt to end the Migration Protocols Program, also known as “Remain in Mexico,” but the U.S. Supreme Court ruled last week that the president could end the policy.

With immigration officials overwhelmed, local officials have said they are taking matters into their own hands. Kinney County Sheriff Brad Coe said that last week his office took four migrants into custody after they had been involved in a car wreck. He tried to turn them over to immigration officials, but they would not take them because they said the migrants needed to be medically cleared.

Coe said he did not have enough deputies to wait with the migrants for hours at the hospital so he made a “command decision” to offer them a ride back to the U.S. port of entry in Eagle Pass.

If the state does not provide additional resources, Coe said, his agency would continue doing its work but it would come at great cost.

“My guys are working 14-hour days, six days a week. They understand what’s going on. They’re gonna keep doing it,” he said. “We’re just gonna keep trying to be heard either in Washington or Austin.”