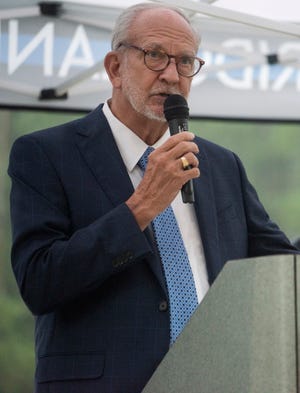 Ridgeland officials and the county library system that operates the city’s branch reached an agreement Monday following a months-long standoff over the display of LBGTQ books and a threat to withhold library funding.

“We are pleased to announce that the longstanding relationship between the City of Ridgeland and the Madison County Library System will continue,” officials said in a joint statement.

Monday evening, the Board of Aldermen approved a memorandum of understanding between the city and library system.

Mayor Gene McGee, the board and the library system’s Board of Trustees support a diverse library collection consistent with the American Library Association’s Bill of Rights.

“Libraries should provide materials and information presenting all points of view on current and historical issues,” they said in the joint statement. “Our libraries are a repository of knowledge and culture, providing far more than access to books.”

How did we get here?

Earlier this year, McGee said he would withhold the library’s $110,000 funding after the library featured an LGBTQ display with books including “The Queer Bible” and “Toby Wears a Tutu” in its children’s area.

Word of the mayor’s threat to withhold library funding spread nationally and support came in the form of over $110,000 raised by the furry community, whose members share an interest in anthropomorphized animals and often are part of the LGBTQ community.

At a Board of Aldermen meeting in February, more than 100 people attended a public hearing about the city’s support of the library. Of 21 speakers, half agreed with the city about limiting display of the books. The other half warned against censorship and book bans.

She said materials aren’t excluded based solely on subject, including topics people may object to. Censorship, including of LGBTQ books, sends a message to those who identify with subjects in the book that they aren’t welcome, Johnson said in the statement.

In a previous statement, city officials said the city was not withholding library funding over books nor did it want to censor or ban any books. The city said the dispute was over a contract.

During the dispute, the city found the contract between Ridgeland and the library system had expired. The city approved a contract for the library in March.

Crafting a memorandum of understanding

The city and the library system worked on a memorandum with the goal of fostering communication, cooperation and better relations.

At least three drafts were created. In those drafts, both sides added language or made revisions.

For example, a version by the city asked for library displays to be “age-appropriate” and meet “community standards.” It also asked for library system’s Board of Trustees to have policy and procedure in place to address complaints from the community.

The library system responded with a newer draft taking some of those asks out.