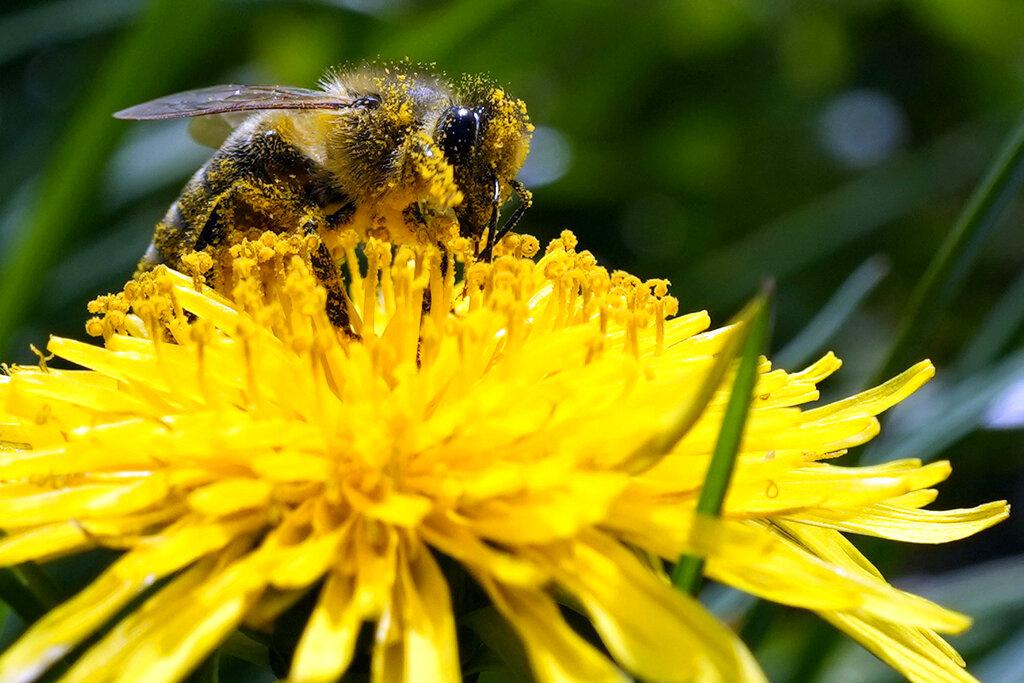 A bee searches for pollen on a flower during a sunny spring day in Belgrade, Serbia, Friday, April 8, 2022.

Climate change and habitat loss from big agriculture are combining to swat down global insect populations, with each problem making the other worse, a new study finds.

While insects may bug people at times, they also are key in pollinating plants to feed people, making soil more fertile and they include beautiful butterflies and fireflies. Scientists have noticed a dramatic drop both in total bug numbers and diversity of insect species, calling it a slow-motion death by 1,000 cuts. Those cuts include pesticides and light pollution.

Big single-crop agriculture that leaves less habitat and leafy food for bugs plus higher temperatures from climate change are huge problems for insects, but a new study in the journal Nature Wednesday based on more than 750,000 samples of 18,000 different species of insects says it’s not just those two threats acting on their own. It’s how habitat loss and climate change interact that really smashes bug populations.

In about half the cases where numbers of insects had plummeted, researchers found climate change and habitat loss from agriculture magnifying each other. In more than a quarter of the cases of biodiversity loss, meaning fewer species, the same dynamic was at work.

“We know insects are under threat. We’re now getting a much bigger handle on what they are threatened by and how much,” said study author Charlotte Outhwaite, an ecologist at the University College of London.

“In this case, the habitat loss and climate change can often be worse than if they were acting on their own, as one can make the impact of the other worse and vice versa,” Outhwaite said. “We’re missing part of the picture if we are only looking at these things individually.”

For example, monoculture agriculture often reduces tree shading, making it hotter in a given spot. On top of that comes climate change, she said. Then insects that need heat relief or need to move north for cooler climates can run into problems with lack of proper habitat from large farms.

It’s especially a problem in countries like Indonesia and Brazil, where forests are being cleared and temperatures are heating up higher than other parts of the globe, Outhwaite said.

“Cocoa is pollinated primarily by midges and people don’t like midges. You know they’re the annoying ones that bite you, they pester you at picnics,” Outhwaite said. “But if you like chocolate you should be appreciative because without them we would have a lot less cocoa.”

The same can be said about bees, which are having a hard time with warming from climate change and single-crop farming, Outhwaite said.

Insect pollinators are responsible for about one-third of the human diet, according to the U.S. Department of Agriculture. And 2 out of 5 species of invertebrate pollinators, such as bees and butterflies, are on the path toward extinction, a 2016 United Nations science report said.

What makes this study important is that it’s the first to link climate change and industrialized agriculture together in explaining harm to insects, said University of Connecticut entomologist David Wagner, who wasn’t part of the study. Because the study used so many different samples and species and looked around the world, that gives its findings more credibility, Wagner said.