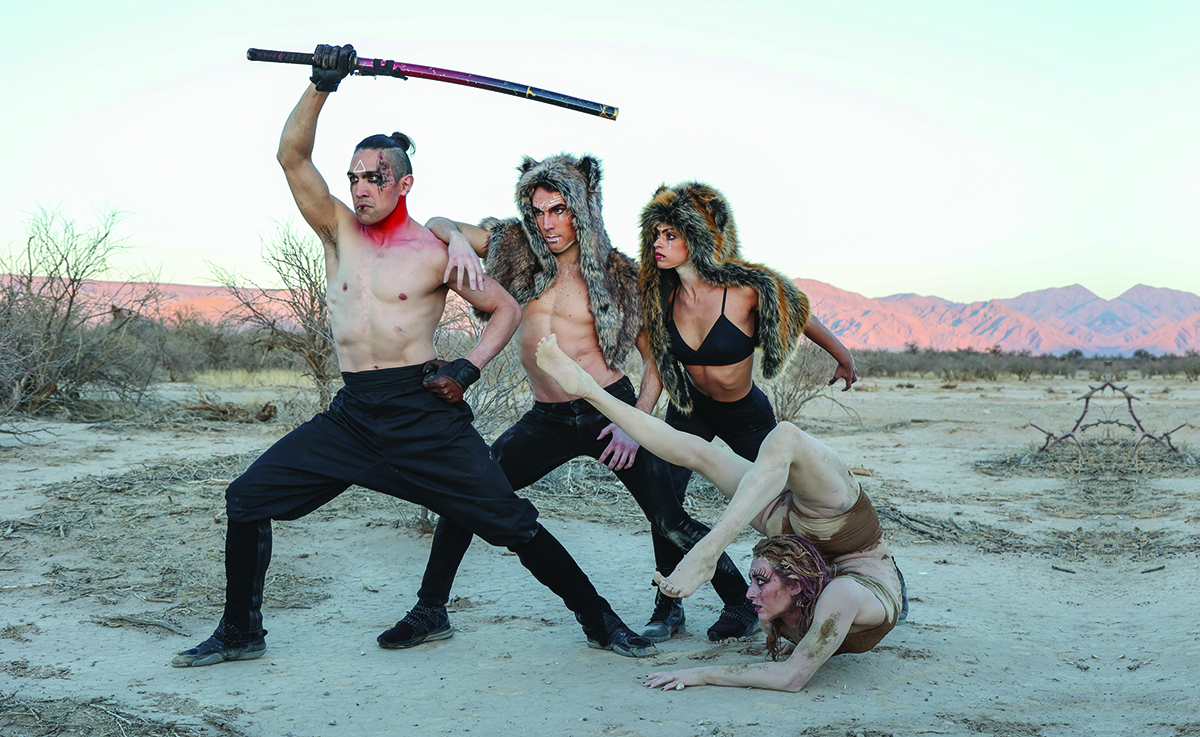 We knew it was something special the moment you drove up to Sandy Valley Ranch, a proper horse ranch about an hour southwest of Vegas on the California side of the border. A stilt walker glided through the preshow crowd, spreading her diaphanous black wings for photos. A horse-drawn surrey rolled by, driven by a ranch hand in a top hat. And at showtime, we were ushered into a horse arena, seated on hay bales and treated to a circus/variety show under the stars.

That was the inaugural Ignite festival, May 2021. Las Vegas’ showrooms were slowly reawakening from the pandemic shutdown, but for many of us it had been more than a year since we’d seen a performance of any kind. Ignite gave us a night of balancing acts, acrobatics, fire acts, clowning, music and more, suffused in desert magic.

Ignite 2021 was, in no small measure, a much-needed night of uplift at the end of a long, bad year. It feels like a tough act to follow, but it’s happening: Ignite returns to Sandy Valley Ranch April 22-24.

Festival founder and co-director Sandi Croft says that Ignite proved simply too good not to repeat.

“It’s not just about the show. It’s about getting outside of Vegas. It’s about bringing the whole family out to the ranch and seeing the animals and all the circus artists,” Croft says. (More evidence that Ignite is a different kind of circus animal: For this interview, the show’s principals and I sat cross-legged in a semicircle on the floor of a west side rehearsal space, like schoolkids at story time.) “And then, on top of it all, to see a brilliant, moving, gorgeous show with the top talent in Las Vegas … and now, from other states as well. It’s really just taking what we did last year and recreating it, hopefully as an annual event.”

“There was no pressure on this last year. It was just ‘let’s come together as a community,’ and it did so well,” says Ignite co-director Brandon Pereyda, noting that the feedback from attendees, from the guests to the performers to the vendors to the volunteers, was overwhelmingly positive. “I mean, even a week afterwards, a lot of us still had that energy going.

“That’s why, probably around October or November, we were like, do we want to do this again? And everybody on the team was like, ‘Yes, I’m ready to feel that feeling again.’”

Though this time, more people will be able to enjoy it. But not too many more.

“Last year we had numbers that we obviously had to stick by. And we went right up to those [attendance numbers] because of the amount of love and support from the community,” Pereyda says. “This year, we added one more day … but at the same time, we’re keeping it so that it’s not too big. We want this to be a very special, close and intimate event for everybody to experience. I don’t want Ignite to become this massive festival. That’s not what it is.”

What that means is most of the elements that made last year’s festival such a pleasure to attend will also be present this year, expanded in size and scope—including the courtyard of food trucks and drink vendors, the DJ-driven afterparty and the accommodations for guests who’d like to sleep over. Sandy Valley Ranch offers several overnight options, including covered wagons and glamping tents.

It probably also means there’ll be more hay bales in the outdoor arena, spaced closer together. But as to the particulars of the show itself—what acts we’ll see, what surprises we’ll encounter—we’ll have to wait to see what artistic directors and choreographers Alexis Ochinand Arnaud Boursain have helped to dream up.

“We went out to the ranch the other day for a photoshoot, and the magic, the energy of this place is just so incredible,” Ochin says. “We’re really trying to tap into that for the show experience, how you can reconnect to something that’s very deep and very meditative. As humans, we’ve gathered around fires under the stars and exchanged myths and legends. That’s what we’re gonna do. We’re creating our own myths and legends with all these talents.”

And some of those myths will soar: Ochin says that Ignite will now include aerial acts, a new addition for 2022.

“The catchphrase of Ignite is ‘[Disconnect to] reconnect,’” says Boursain. “I feel, for my part, it’s really about reconnecting as a human being to nature; as a professional, to the creative process; as a friend, to reconnect with the artists; and to support and help the community here. It’s really like feeling alive again.”