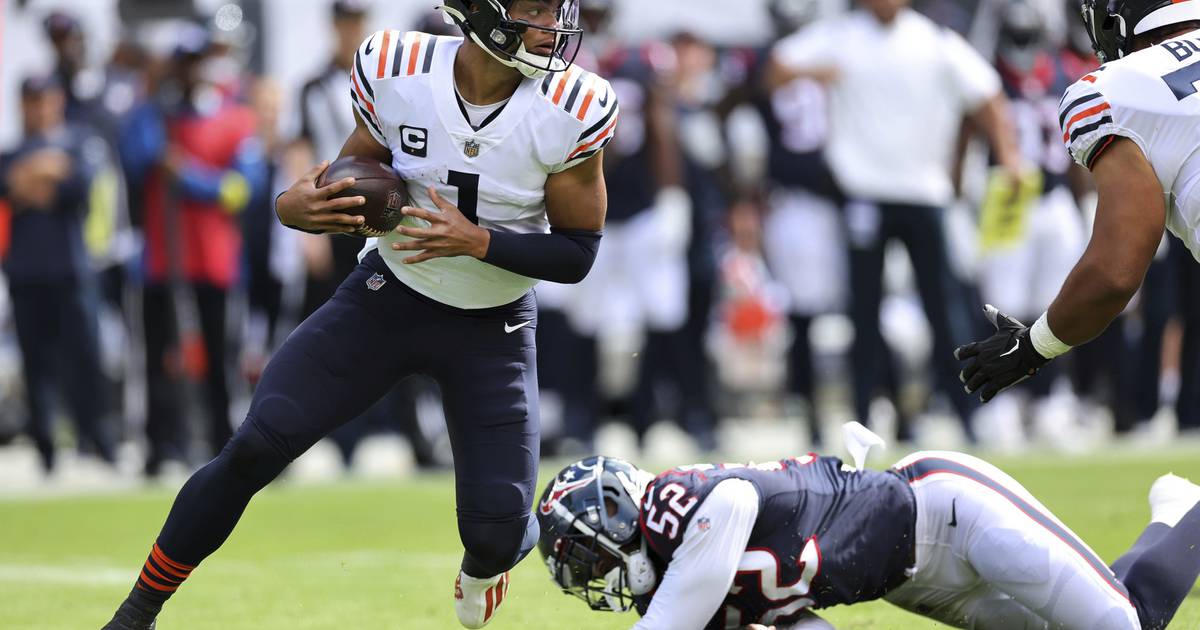 Roquan Smith came up with a big play just when the Chicago Bears needed it Sunday afternoon at Soldier Field.

Smith jumped in front of Houston Texans quarterback Davis Mills’ pass to Rex Burkhead for an interception and returned it 18 yards to the 12-yard line with just more than a minute to play.

Kicker Cairo Santos followed with a 30-yard field goal to give the Bears a 23-20 victory to improve to 2-1.

With the score tied at 20, the Texans committed a holding penalty on a punt return and got the ball at their 17-yard line with a chance to take the lead. But three plays into the drive, Smith came up with the play on a pass that defensive lineman Angelo Blackson defended.

It helped seal a game in which the Bears rushed for 281 yards but the passing game again struggled.

Filling in for injured David Montgomery, running back Khalil Herbert had 20 carries for 157 yards and two touchdowns. Bears quarterback Justin Fields completed 8 of 17 passes for 106 yards with no touchdowns and two interceptions.

Texans safety Jalen Pitre intercepted Fields twice, the second on a pass to Darnell Mooney with three defenders nearby in the fourth quarter.

But Bears defensive lineman Justin Jones sacked Mills for a loss of 8 yards and Nicholas Morrow stopped Pharaoh Brown for a loss of 5 yards on third down to kill the ensuing Texans drive.

Herbert’s 1-yard touchdown run midway through the third quarter gave the Bears a 20-17 lead. Herbert broke for a 52-yard run and Fields hit Equanimeous St. Brown with a 20-yard pass on the drive.

Texans kicker Ka’imi Fairbairn made field goals from 39 and 23 yards in the third quarter. Before the latter kick, Smith stopped Dameon Pierce for a loss of 3 yards on third-and-1 from the 2-yard line.

Read all our coverage from Week 3.

Bears cornerback Jaylon Johnson will miss Sunday’s game against the Texans with a quad injury he suffered in practice Thursday.

But linebacker Roquan Smith, who missed practice all week with a hip injury, will play.

Johnson’s absence is big for a young Bears secondary. Opposing teams largely have stayed away from targeting Johnson, instead going after rookie Kyler Gordon, who moves between outside cornerback and nickel, and Kindle Vildor. Gordon had a rough night against Green Bay Packers quarterback Aaron Rodgers in Week 2.

David Montgomery went down with a right leg injury midway through the first quarter. After the trainers tended to him for a few minutes, he walked off the field on his own into the medical tent. He then left the tent to go to the locker room.

Running back Khalil Herbert entered the game after Montgomery left and had carries of 8 and 11 yards and then scored on an 11-yard touchdown run to put the Bears up 10-0 midway through the first quarter.

As the clock ran out in the second quarter with the Texans leading the Bears 14-13 some boos could be heard across Soldier Field.

Bears quarterback Justin Fields completed just 4 of 11 passes for 45 yards, no touchdowns, an interception and an 11.6 passer rating in the half, which ended with the Texans’ third sack as time ran out. The Bears had timeouts to use but didn’t to try to get in a deep shot.

Playing without David Montgomery, who left in the first quarter with right knee and ankle injuries, running back Khalil Herbert rushed for 64 yards and rookie Trestan Ebner rushed for 23 yards. Fields also had 47 yards rushing.

The Bears were threatening to retake the lead late in the second quarter but couldn’t come up with a big play.

On third-and-5, Fields hit tight end Cole Kmet with a 24-yard pass — Kmet’s first catch of the year — to get to the Texans’ 27-yard line. But the Bears offense stalled three plays later when Jerry Hughes sacked Fields for a loss of 9 yards. Bears kicker Cairo Santos made a 50-yard field instead to cut it 14-13.

Santos made a 47-yard field goal on the game’s opening drive for a 3-0 lead. And Herbert scored on an 11-yard touchdown run after Montgomery left the game to make it 10-0.

But Davis Mills’ 4-yard touchdown pass to Jordan Akins cut the Bears’ lead to 10-7. That drive included a 52-yard pass to Chris Moore.

And the Texans took a 14-10 lead on Dameon Pierce’s 1-yard touchdown run with 7:32 to play in the second quarter. Pierce had four carries for 41 yards on the drive, which started with Desmond King’s 30-yard punt return.

Bears safety Eddie Jackson forced a fumble and had an interception in the first quarter.

The Texans recovered the fumble, but the pick came at a key moment. With the Texans threatening to take a lead at the Bears’ 7-yard line, cornerback Kindle Vildor broke up Davis Mills’ pass to Brandin Cooks in the end zone. Jackson grabbed it out of the air but stepped out of the back of the end zone. The Bears got the ball on their 20.

There’s a slight chance of rain in Sunday’s forecast, but nowhere near the amount of precipitation fans endured in the Week 1 win over the 49ers (so, no Slip ‘N Slide celebrations this time around). The expected high is set for 69 degrees, with wind of the WNW at 19 mph.

Chicago experiences higher temperatures longer than outlying suburbs due to the heat-island effect. Its location next to Lake Michigan’s warm waters explains why the city and nearby suburbs freeze later in the year than their farther-out counterparts.

Locally, the National Weather Service’s Climate Prediction Center is forecasting temperatures leaning above normal and “equal chances” of above or below precipitation from October through December.

If you’re headed to Soldier Field, here’s our guide — including where (and what) to tailgate. And no, you won’t be hearing the Bear Raid siren this year.

A rendering released by the Chicago Bears shows the view from the threshold of the proposed stadium of the Arlington Park entertainment district. The Bears released proposed development plans for the Arlington International Racecourse property in Arlington Heights on Sept. 6, 2022. (Hart Howerton/Chicago Bears)

Arlington Heights officials rejected a petition to ban village financial incentives for Chicago Bears or any other business, stating that the petition didn’t have enough valid signatures — and warning that such a move would hurt businesses and taxpayers.

The petition calls for the village to create an “Anti-Corporate Welfare Ordinance” that would prohibit any financial or other incentive to a business to operate in the village. The petition was submitted by Americans for Prosperity Illinois, part of a libertarian group backed by the conservative Koch brothers. Read the full story here and read all our coverage here.

The comparisons were all over social media this week.

Chicago Bears quarterback Justin Fields has 28 pass attempts in two games this season. Every other team in the league has at least 28 completions and 52 attempts.

The Bears’ measly passing-game numbers, which total 15 completions and 191 yards, have dominated talk, with coach Matt Eberflus saying the Bears need to strive for a better balance in the running and passing games.

[ [Don’t miss] Column: Patience is required to evaluate QB Justin Fields — especially with the Chicago Bears offense around him ]

Offensive coordinator Luke Getsy understands it: “I love to throw because I’m a quarterback guy, right?”

And surely Getsy knows Fields needs to throw to develop in his second season. But Getsy also believes in following a plan tailored to what a defense is presenting them. Read the full story here.